Do you still have your first custom?

I’m pretty new to this and I’m still rocking my first custom, but soon I will have three more if there’s no more delays and another one scheduled for next year.

The reasonable part of me thinks that I should sell it to fund my future parts and projects but the sentimental/collector/horder part wants to keep it for a nostalgic milestone.
It’s no looker by any means but u know, it’s my first.

Soo, what did you do to your first as u went down the rabbit hole?

I waited and waited for my first…

Depends on how you want to define custom. If by custom you mean any board, whether it be a complete custom from a GB or just a board you made from mass produced parts, then no it’s long gone. My first build was tray mount 60% in a plastic case which quickly got upgraded to a low profile aluminum case, then rebuilt a couple times, eventually getting disassembled to recoup the parts. If by custom you mean a fully custom board from a GB that has proprietary parts, then yes I still have mine. It would be a Redscarf II+ ver.C kit I bought from someone on mechmarket around 3 yrs ago. I very rarely use it anymore as I have much better feeling/sounding boards, but as it was my first true custom in my eyes I want to hold onto it.

Most of my starter boards & tray mount 60%s I built to try out different switches I have sold off though. I encourage anyone in this hobby to sell a board they have stopped using for the most part & don’t have any particular attachment to for funding future builds. As long as you ain’t trying to scalp on the prices it’s a win win, someone gets a new board so it’ll be used frequently again & you get funds for stuff you’d rather have than that/those boards. Also given the huge money sink this hobby can be when you get into the higher end stuff it only makes sense to sell some boards to fund future ones IMHO.

I still have all my boards, with one and a half exceptions.

I passed my RK61 to my Uncle who mentioned needing a bluetooth keyboard - and while I did give my very first mech (an EasternTimes Tech I-500) to a friend, I bought another of the same model shortly after because they were like $26 at the time and surprisingly solid. The second one had Outemu blues instead of SwitchMaster blues and gamer-tastic double-shot abs caps instead of actual garbage, but otherwise identical. The original one got a set of Ducky caps and is currently infecting its third owner across the country with the bug.

These days I pretty much only break out the I-500 for lols because it was my loudest keyboard by a fair bit - at least until tonight. More on that at another time in another thread…

I would define it by if it involves soldering its custom.

If hotswap it needs to take 5pin.

Hello，
Do you need a factory to help you to realize all kind of keyboard custom?

If I’m recalling correctly, my first custom was actually a Pearl which I still have! A lot of other boards have come and gone in that period though.

My first was a Planck, I sold it a long time ago. I just couldn’t deal with the Ortho layout.

The first board that was all parts is disassembled at this point in time, but it’ll be revived soon! I need to get a new case and some good acoustics for it, but I’m going to keep the brass plate and fix up the PCB… eventually.

the keyclack PCB was literally unusable, if I had not had and extra QMK PCB for it I would have not been comfortable selling it and would have used it as an expensive paperweight

The M65-A was a RAMA design, but it was ran by Keyclack. All RAMA did was handle the design, not any other portion.

Yep after sales service was on Jchan with the M65-A, unfortunately he didn’t do such a great job cleaning up the issues caused by the PCB or any other issues with the GB for that matter from what I heard.

I’m pretty sure he designed the PCB, or contracted it out to someone else, but iirc it was called the jc65 pcb. Whoever designed it had no idea at all what they were doing, it was very very poorly done.

I count my first “programable” board as my first custom, and I still have my Tada68 with aluminum case.

Over the years I have made upgrades to it. I got a new PCB and brass plate to try out a different layout, but KBDfans missed up and sent me a dz65rgb. Not really what I wanted, but it was still an upgrade. Having hotswap is nice. With this and foam, this board has only gotten better. I like the layout and the original aluminum case is solid and has a heft that other, newer boards I have purchased just don’t have.

Here is a potato pick of the old gal: 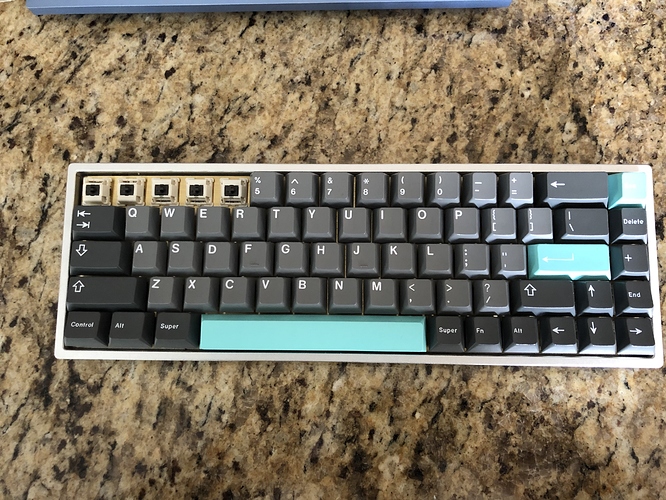 You couldn’t & still really can’t go wrong with a Tada/Saber68 in their OG alum cases for a decent priced but still good quality keeb! I ended up selling mine off a while ago, but only because I got a Redscarf II+ ver.C that allowed me to get the layout I wanted with a 65%. Otherwise I’d probably still have my Tada TBH. 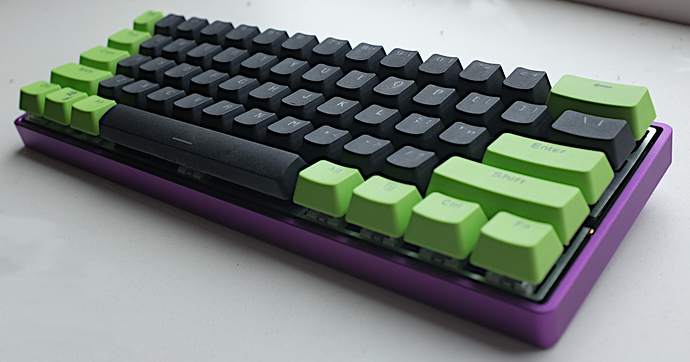 All of mine so far have been prebuilt, but scored on a group buy for a custom case and am gathering the parts for my first real build.