Put together a DZ60 Rev 3. Initially all LEDs were full-on red.

I was trying to debug why some keys weren’t working. I cleared/flashed different firmwares and had some trouble during one of the flashes. During this time some of leds went off and stayed off.

Eventually I fixed the keyboard layout problem by using the dz60-via.hex firmware and the VIA Gui to configure the correct keymap.

I’m not how the circuitry for this should work, but feel like the arrangement of problematic LEDs
probably is a clue of what type of problem it is, or what location the problem is. It’s totally possible I broke or shorted something while fussing around earlier trying to diagnose the malfunctioning keys. Although I only noticed the problem appeared after an attempted firmware flash.

I’d like to find and fix the problem – electrical measurements and microsoldering are not a problem, but I’m not sure what troubleshooting tree i should follow. Has anyone done somethign like this?

Those leds are WS2812 and are wired in series.
You have only one pin used by the MCU to send data to the first led and the data is propaged to the other leds that are connected in series.
So if one of the leds in the middle of the chain is totally dead, then all leds that follow will also not function properly.
Just to be sure your 1-3 leds are in the middle of the chain or not would be to check with a mutlimeter what MCU pin is used and witch led it connects to.

Hi Rico. This WS2812 data sheet suggests there are six pads (3x2). However the LEDs on my pcb have only four pads (2x2) viewed under my stereoscope. This corresponds with the the schematic, which also indicates only four pads (doesn’t state the component type). 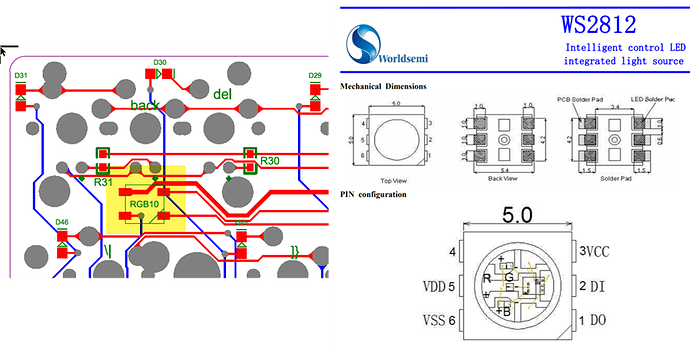 One of the pins of the MCU is connected to DIN of one of the leds.

Maybe try to ‘clear eeprom’ in QMK toolbox then reflash? Worth a try and takes a couple seconds.

I measured all the leds in diode mode and in ohms mode hoping to find an led with ‘off’ measurements compared to the others. But they all measured the same.

I checked continuity of neighboring LEDs ‘data in’ and ‘data out’ pins. The message path of the chain of leds seems intact.

I checked for 5v across the power/ground pins of each led, and they’re all getting 4.94v.

So unable to detect anything obviously wrong with the led components/circuit.

The problem emerged when I experienced a dodgy firmware flash, but eventually i erased/reflashed with the dz60-via.hex and the keyboard was working again. If there was bad code on the LED stuff, presumably the reflash with dz60-via would have cleaned that out right?

So I’m running out of debugging ideas on this.

Had you all leds working before attempting your first flash?