Hey again, I am working on an NK65 EE build and am having some difficulties with tuning the stabs. Out of the box the stabs are lubed and they felt pretty decently smooth. However, after the first time I removed them from the plate, I came across an issue where they feel like they are getting caught on something in the stab housing when pressed. Also, it feels extremely scratchy after it reaches this point where it catches. After some more testing, it seems to be an issue with the stab legs rubbing against the clipping mechanism. This is only been an issue on three of the eight stab housings and I do not know what to do. I have tried lubing the legs and the housing extra and also clipping the extra legs on one pair. This has come to no avail. If anyone has any idea on how to fix this or reccommendations on what to do, it would be greatly apprecieated.

Do I need to buy new stabs? Is there something that I am missing?

Thank you for reading.

Bummer. Have you tried swapping the left stab for the right and vice versa? So on your 2U stab, move the stab on the right to the left and the left one to the right and retest. I also flip the stab wire around just to rule out any weird bend I didn’t notice.

Lastly, I would take a stab that works fine and use it’s components to try and fix your bad stab. If that works, then you’ll know exactly what’s wrong.

Have you tried it with different caps to make sure it’s not just a badly warped cap? Also a couple pics would help us help you figure it out if you can upload some.

So after some more testing, I am left even more confused, I switched the stab housings of the L shift with one of the spacebar’s, and it still worked fine, but moving the one from the spacebar into the L shift persisted with the same issue. So I really don’t know what is happening.
Also here is a video to show/hear the issue. 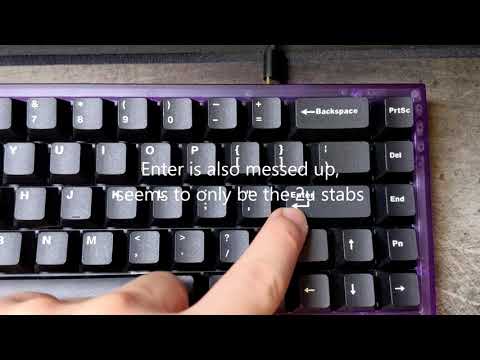 Can you try getting a close up photo of one of the offending stabs?

@aerwck Ugh, IC IC. The only thing I can imagine is the L shift keycap’s left stem hole is hitting the actual plate stab housing. When you continue to press the left side of the keycap, it eventually has enough force to push the stab housing aside. What happens when you swap the Backspace and L shift key?

@ajoflo might be onto something there. Did you use tape or anything on the plate to shim the stab housings tighter? Also I doubt this possible cause of the way plate mount stabs hook into the plate, but are you sure have them oriented right. Like is it possible you put them in with the wire facing the wrong way? Again I highly doubt the last thing, but just spitballing ideas.

This sounds stupid, but it was my first mistake with stabs I’ve made. Are you sure you didn’t put the stems in the wrong way (rotated by 180 degress)?

oml. That was the easiest fix ever. I am an idiot lol. I hadn’t even thought about the fact that I band aided all of my stabs. I originally did it because the spacebar was super loose and I kind of just assumed that I could just band aid everything else. I am guessing that I over compensated as some of them were barely loose. Now I just need to relube them and they should be fine. Thank you everyone for helping. : D

Glad you got it sorted! I’ve been modding keebs for a few years now and I’m still confounded by stabs half the time.

Awesome to hear! I figured something had to be causing binding from the video & those were the first things that came to mind. Glad it was an easy, I would keep them on the spacebar since it was loose before & working fine with the bandaid.