Ever since June rolled over last year, I have been thinking how to commemorate the Apollo 11’s mission’s 50th anniversary. Then I remembered the Apollo Guidance Computer (it made waves over the internet last year, because people were trying to prove that Margaret Hamilton didn’t deserve any credit for it) and its interface — DSKY (pronounced “dis-kee”). 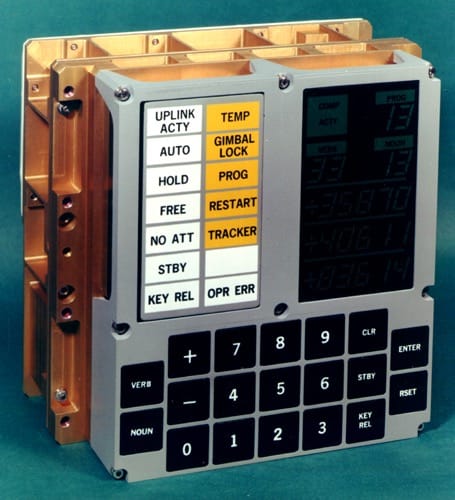 As you can see, the DSKY has a black keypad with white legends, yellow indicator lights, and a green electroluminescent seven-segment display. Commands were entered numerically, as two-digit numbers — called Verb and Noun. The first one represented the action being issued, while the second represented the data that would be changed. 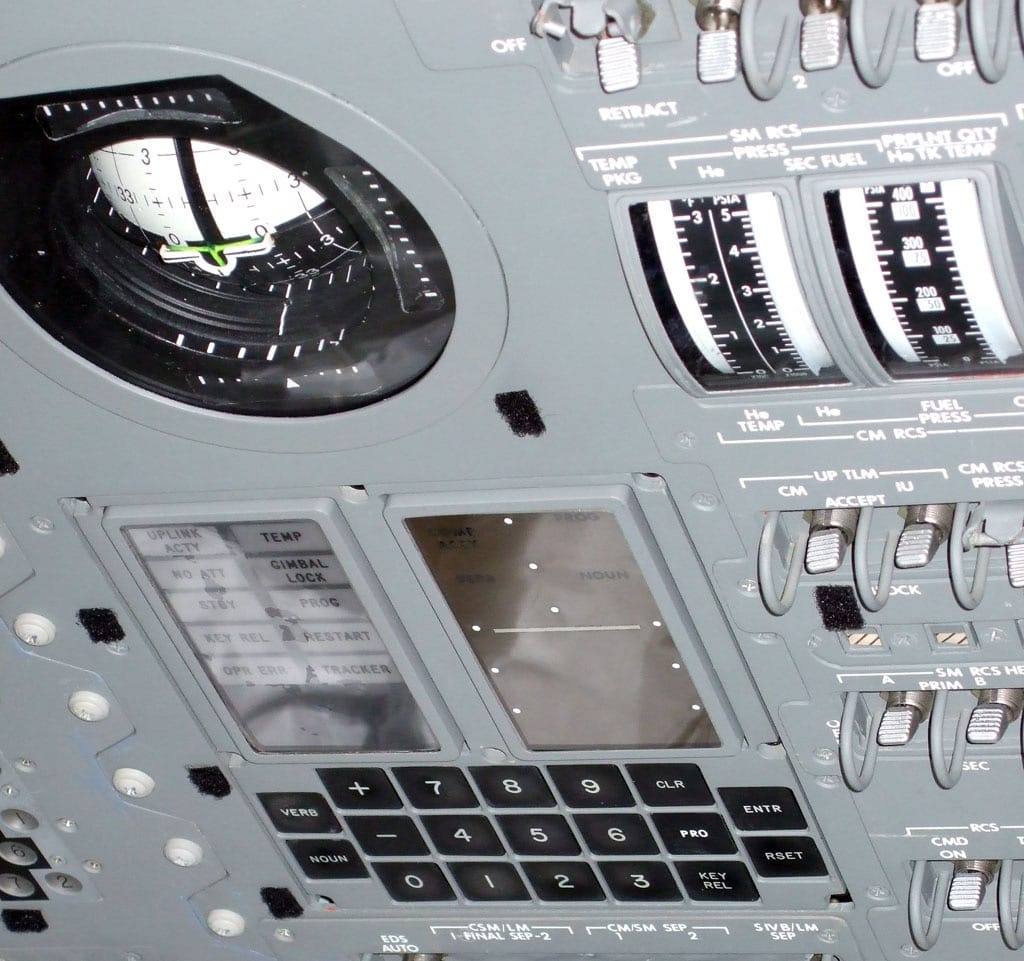 One of my goals was to use the legends and values from DSKY’s various keys and indicators, in place of traditional modifier legends. This in turn led me to a decision to use stock GMK colours, to make everything easier and more affordable.

GMK Lunar uses a medium 2B gray for the alphas and mods with a lighter 2M gray for legends. The Numpad, which I consider an integral part of the whole design and colourway, uses the darker N9 gray with 2M legends. I also chose N6 yellow as the main accent colour, with N9 legends, where appropriate. The Novelty Kit has a set of optional “Master Alarm” accents — these will be RO2. 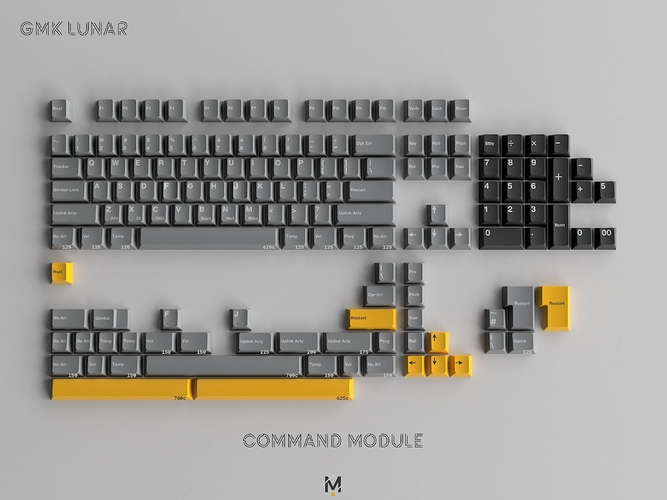 The Command Module (core kit) will most keyboards up to 100% layouts, including 60%, 65%, 75%, and TKLs. Please take note of the custom legends, inspired by the DSKY interface, as well as the sublegends on the alphas, commemorating the Apollo 11 mission and the three astronauts on board — Buzz Aldrin, Neil Armstrong, and Michael Collins. 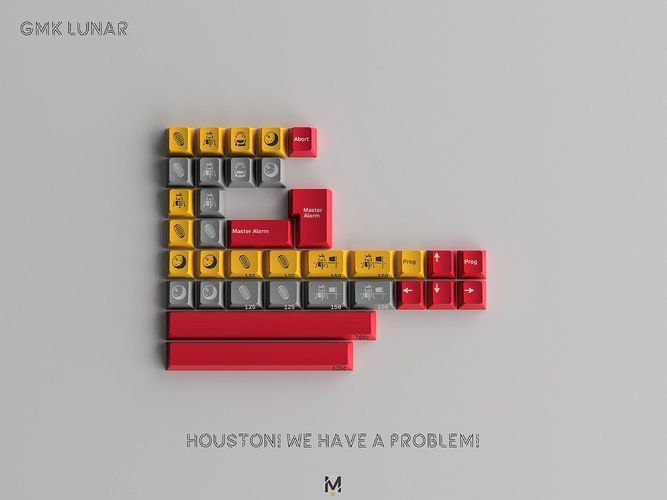 The novelty kit offers custom keys for all rows in the default grey for a more subtle look, the default accent yellow (N6), for those who prefer a little splash of colour, to MASTER ALARM red accents (RO2), for those who want a more dramatic effect. 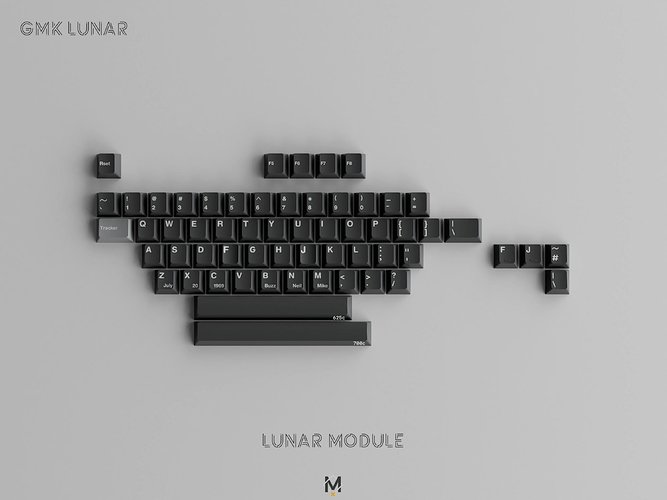 The Lunar Module’s dark alphas are meant for those, who want to deviate a little from the original design and require more contrast between their modifiers and alphas. Coupled with the Command Module, you will be able to cover two keyboards with these kits, if you use specific enough layouts on both. 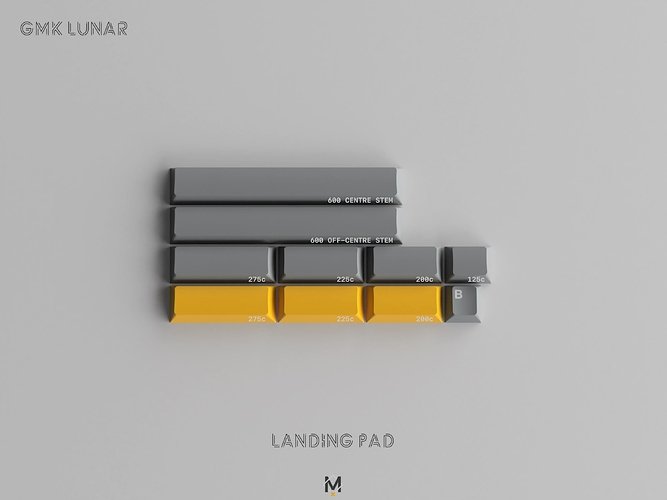 Extra space keys made for split spacebar users, Alice users, and those that require 6u centre stem and off-centre stem bars. 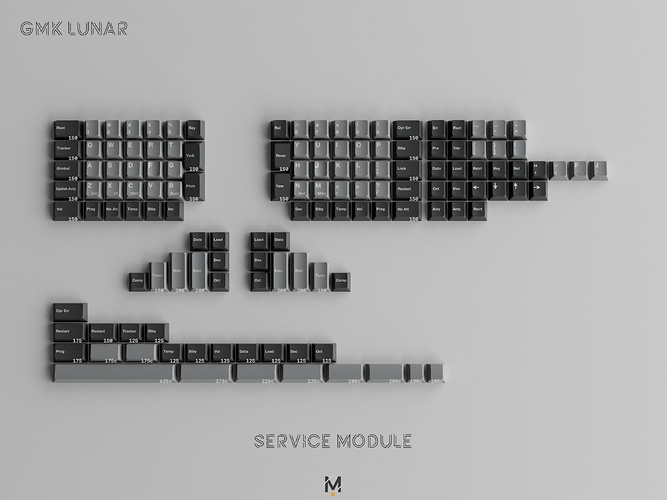 This special kit was built with the expertise of MKUltra, who will make sure that MOQ on this set is met, and it’s meant to cover all manners of 40%, ortholinear, and ergo keyboards. 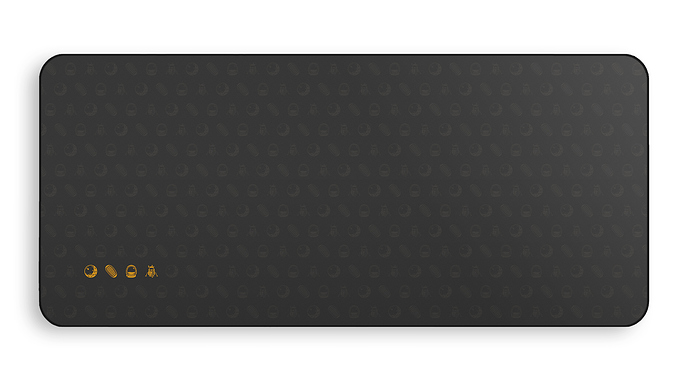 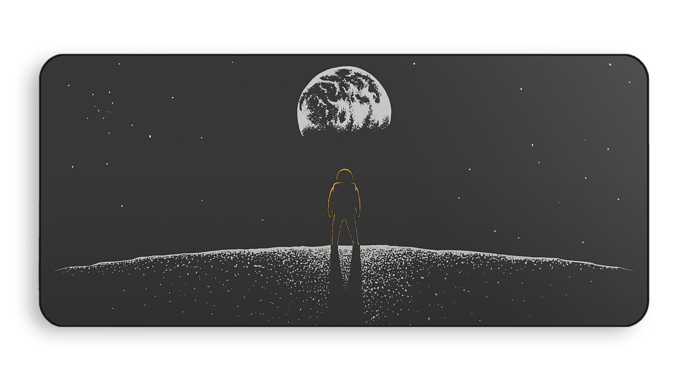 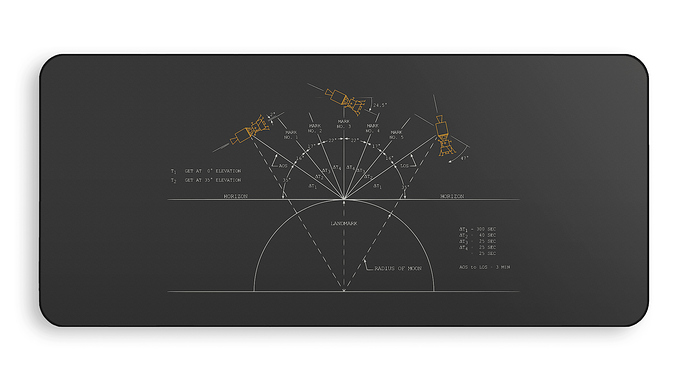 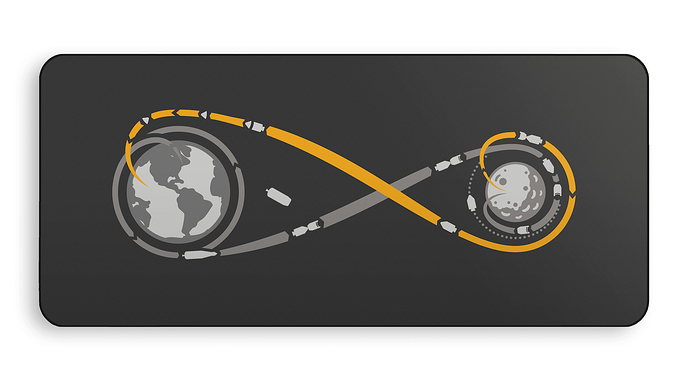 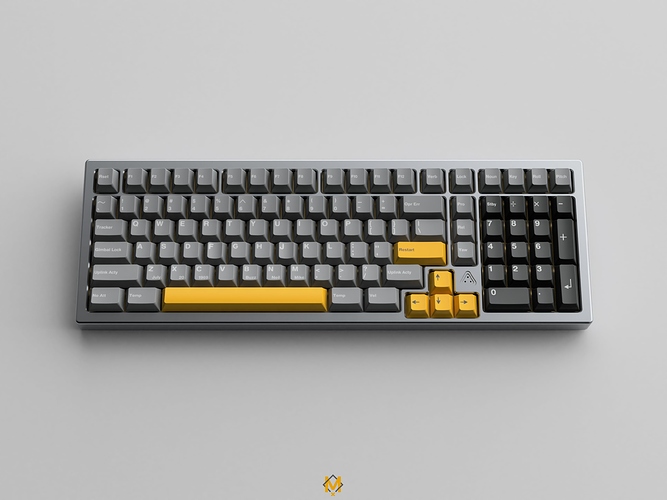 RAMA WORKS M60-A LNY20 in red with GMK Lunar’s Command Module, Lunar Module, and Houston! We Have A Problem! 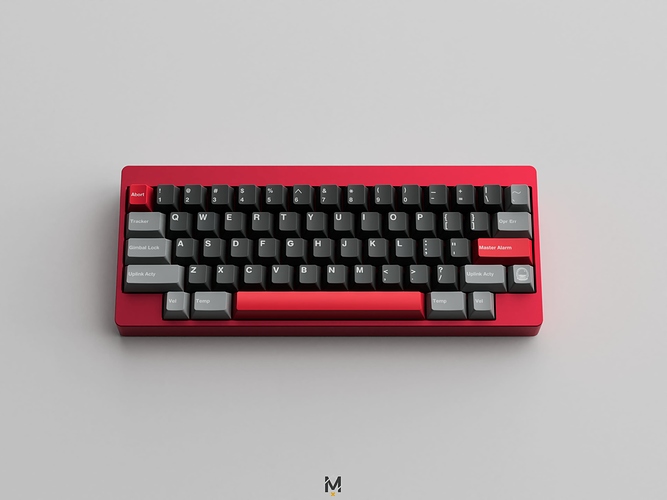 GrayStudio Think6.5° with GMK Lunar’s Command Module and Houston! We Have A Problem! 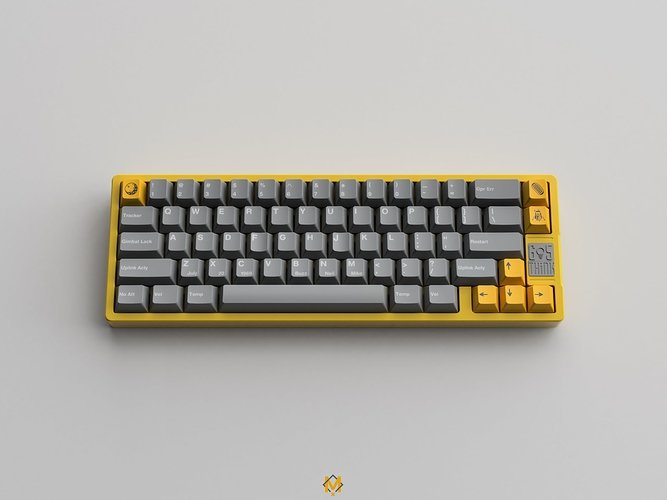 Footprint Artisans from the one and only Salvun! 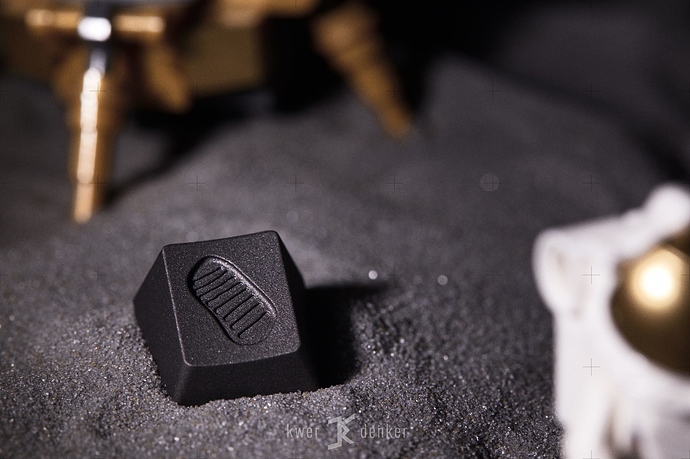 Created by the one and only Salvun, this R1 Cherry profile artisan is crafted from aluminium and cerakoted in ‘Moon Dust’, while the other variant is clear cerakoted brass. 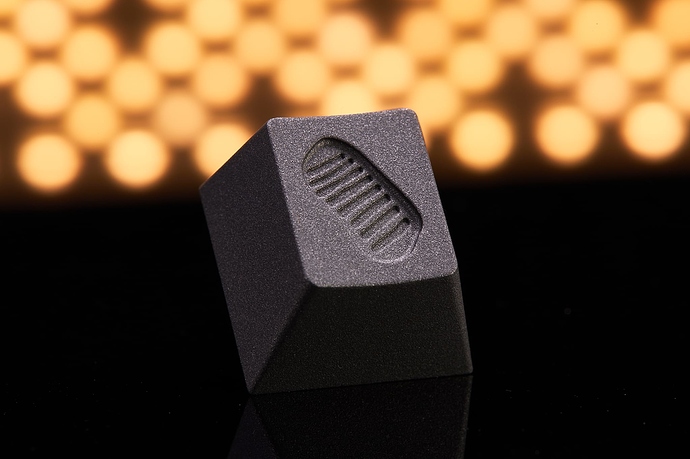 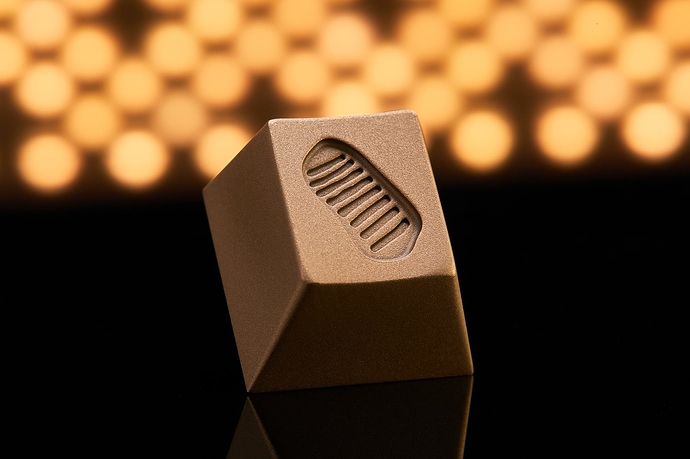 This set is supremely unique in terms of the number of moulds that GMK will make for Lunar — I believe there will be a total of 77 new moulds. I would also like to take this chance to thank GMK for all their help in graciously participating financially in this set, to help bring the price down, as well as the vendors, who have minimised their profits, to make it easier for all of you guys.

Shipping is expected around September/October 2020. 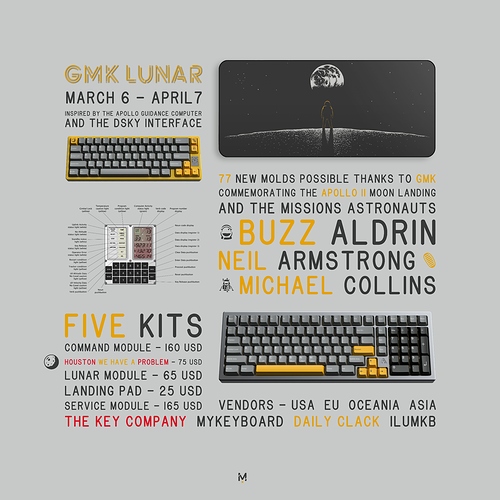 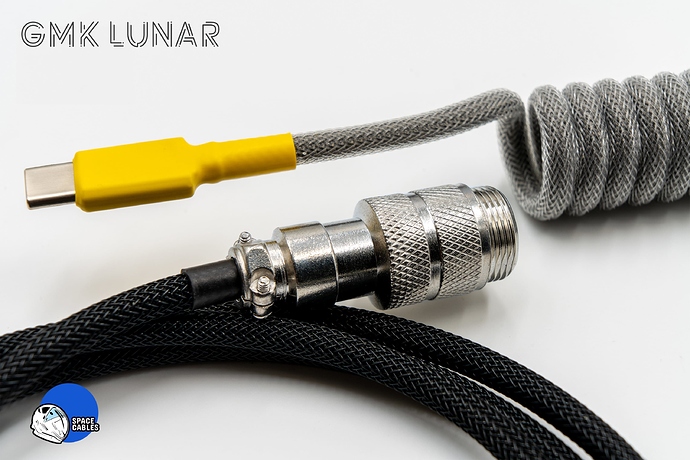 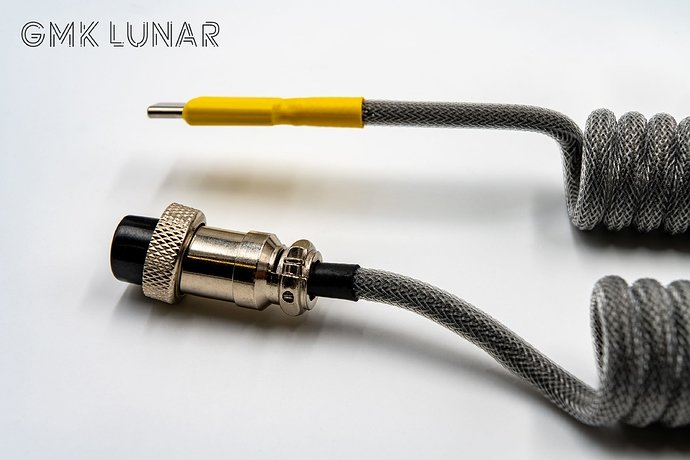 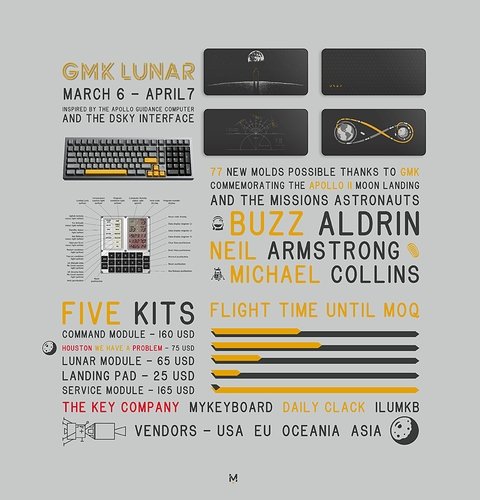 First weekend sales are coming along nicely! The Command Module has reached 40% of MOQ already, while the novelty kit (Houston! We Have A Problem!) is at 48%. Alphas are following nicely at 22%, and the Landing Pad kit is behind those at 13%. Assembly Kit is at 4%, but since it’s bought out, MOQ will be met and it will get made either way.

Desk mat sales are coming along nicely, with the Astronaut and Technical Flight Plan blowing past MOQ already. The other two are halfway there. 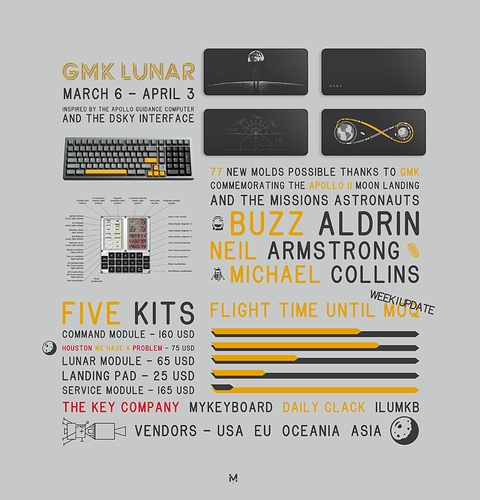 We have partial numbers for Week 1 sales, without Daily Clack for the moment (these should be updated later this week). The core kit (Command Module) is 66% along the flight time to MOQ, with the novelty kit beating it at 73%. Alphas are at 38% and Spacebars at 24%. Mat sales are insane — a total of 183 have been ordered so far — along with 76 artisans by Salvun. Thank you everyone!

We have touch down!

MOQ hit on base + novelties.

The other child kits need some more

Please stay safe and buy if your familiy’s needs and yours are all taken care of!

We are into our final 3 days before the group buy for GMK Lunar ends. The current numbers are:

The dark alpha kit should hit MOQ without issues, but I’m a bit worried about the Landing Pad (Spacebars Kit) — we’re still 56 kits off MOQ and I’m not sure it will be bought out at this point. If you can and want to contribute towards this set, you can do so at a vendor/proxy near you:

I hope you are all well and doing everything you can to best take care of your familes and yourselves. This wonderful keyboard hobby comes second, so please make sure you have everything you need first, before you pre-order anything.

Thank you everyone and stay safe!