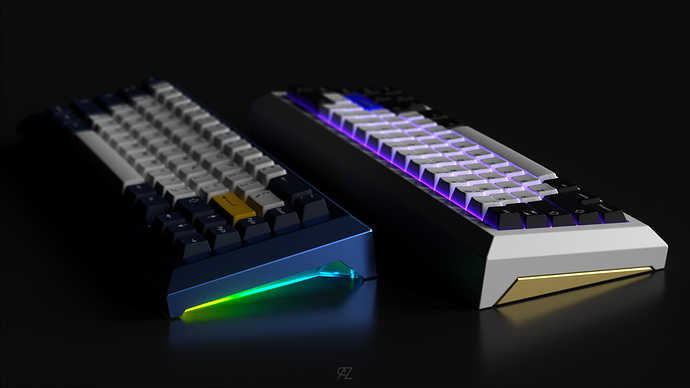 Hello everyone!
I’m here to announce that the Melody65 GB started today. This is a design from me, inspired by the old Melody96, in cooperation with Dion. Also KBDFans will host it, produce and handle the after-sale.

Unfortunately the Founder Edition went sold-out in less than a minute, but we should still have many standard kit units.

Photos of the OLD prototype, mixed with fuonder

Let me know if you have any question regarding the keyboard or the GB. Cheers!

Wow! That looks amazing! Definitely going to be joining this as my first ever GB!

Do you have an estimated ship time?

We don’t have a good estimate yet, but should be 5-6 months

Also, another render by Raz with is amazing Avanguardia 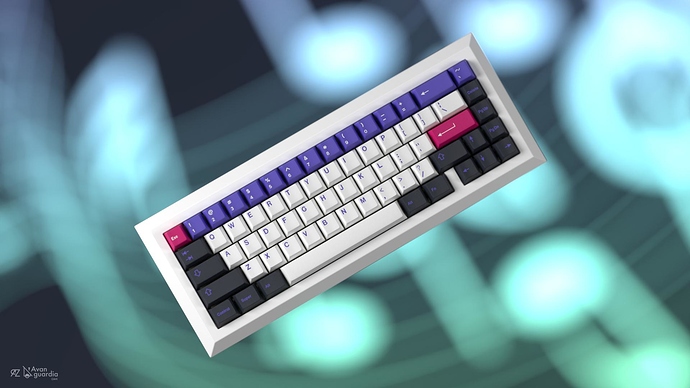 UPDATE
GB went very well and it will close soon

Last time we checked we had 30 orders missing to reach the limit, we should check again in few hours.

As announced, i wanted to announce final dimensions since many asked, but also to make some improvements and here we are!
(please don’t refer at the colors of the renders below, also what is showed is the founder but these modfications are for the standard kit too)

Plates and mounting points :
We were bothered by the many screws (16 before) and few people also noticed it. Our goal was always to remove some of them, but the problem was that the design had the whole plate touching directly the top and the plate was bigger than the top.
In a nutshell removing mounts with the old internal structure, with the plate in direct touch on a big area with the top, would have lead to more vibrations (basically plate hitting/vibrating/flexing against the case), ending by making the sound worse.

The solution was to make some spacing on the case where the ends of the plate sits, making the plate to have contact with the top of the case ONLY on the mounting point. Once we did that, was pretty clear that removing the unnecessary screws was simple at this point and it would have been the best solution. At this point we also removed the side screws and also repositioned the mounting point in “smarter areas” (e.g. making the spacebar more free as possible from screws).
Ended up having 8 final mounting points (also changed the mount from m2 to m2.5) 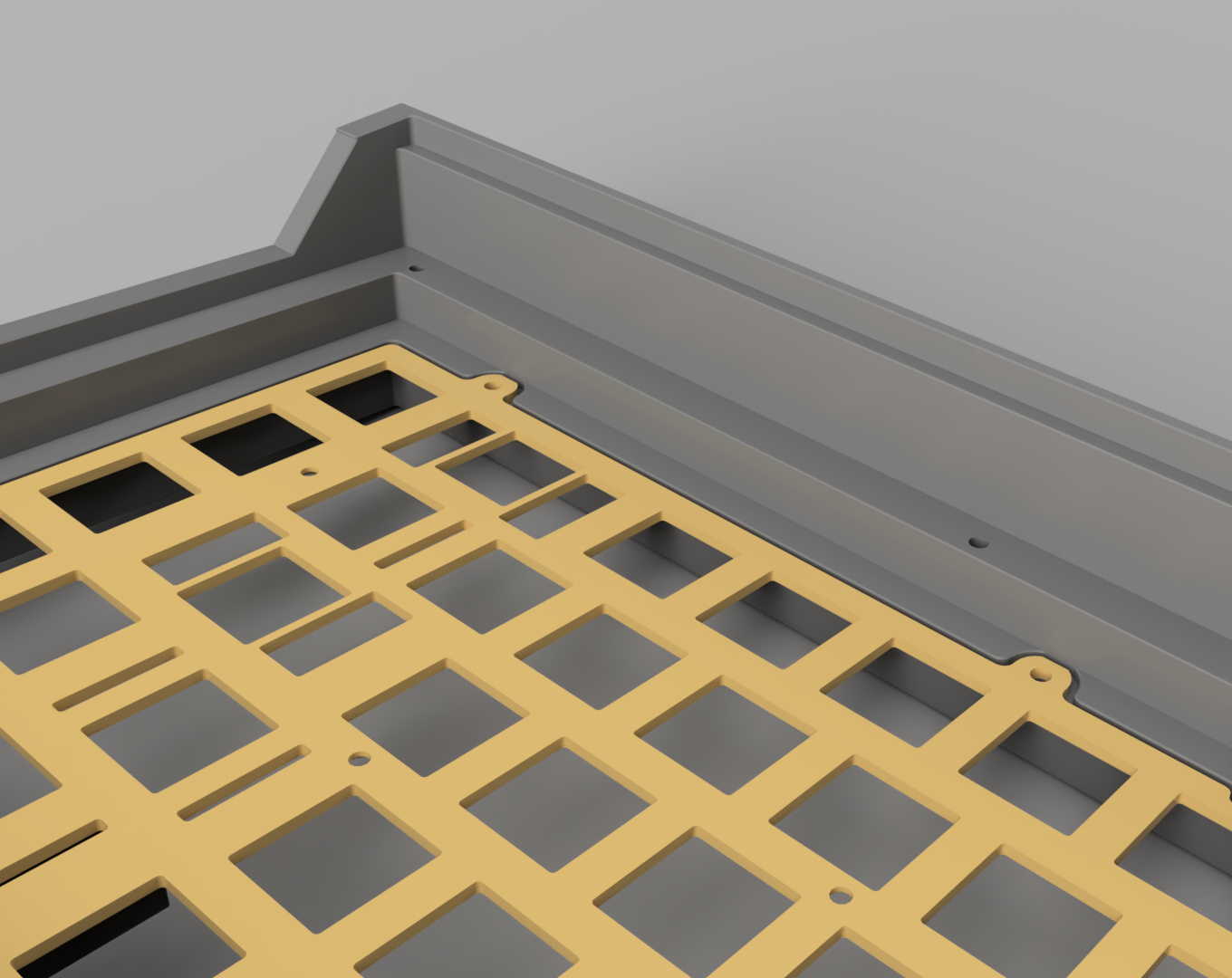 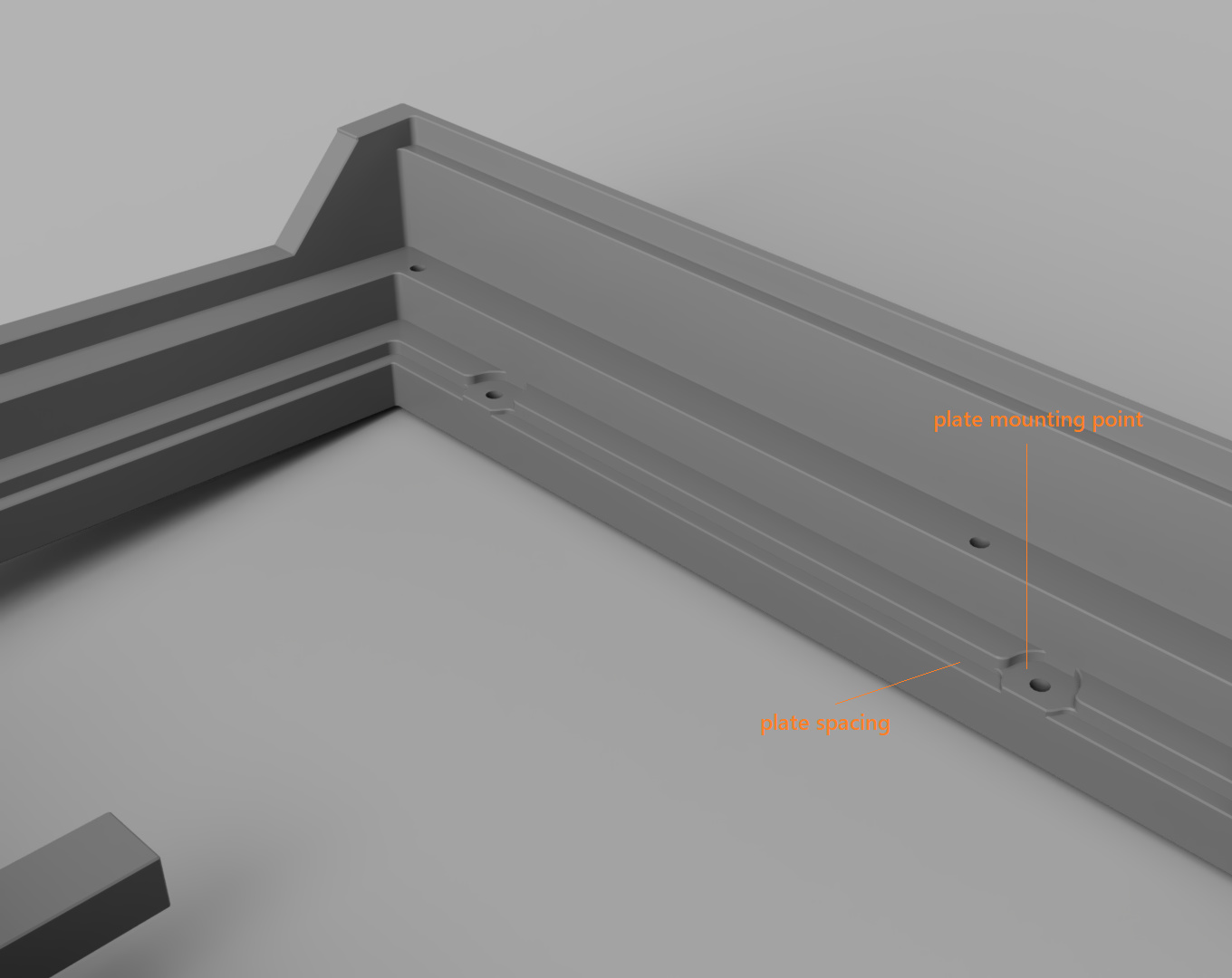 Modified plates here, also included some relief cuts, these won’t do much but still, here we go: 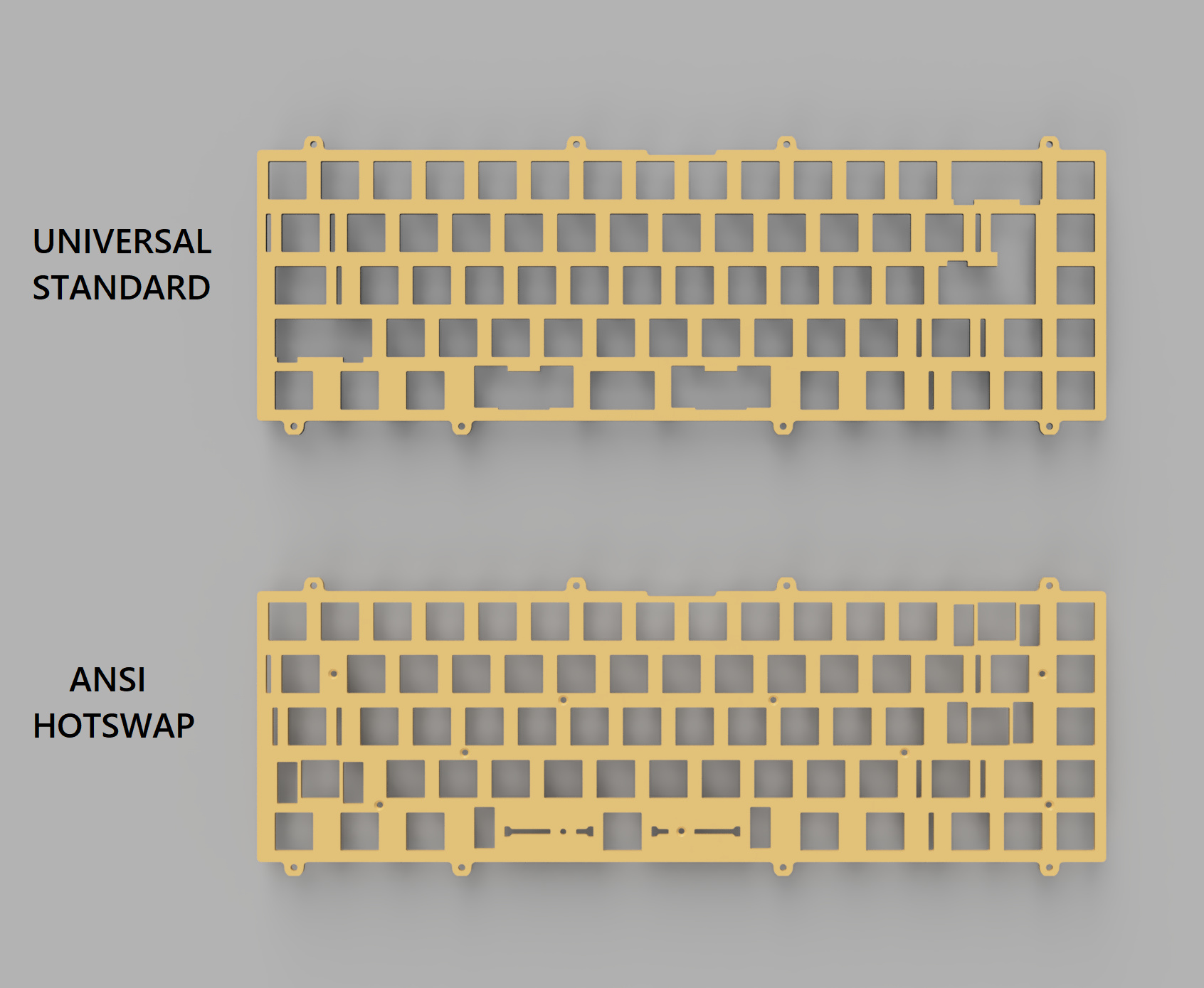 Keeb size and height :
The keyboard was finalized so i can realease the current sizes, should be final now.
I adjusted the height slightly, around 2.5mm lower, in the image below you can find the final dimension (i also included flat and angled dimension). It should be totally easier to use now and also improve the sound (no waste of empty space internally).
Still a wrist rest is recommended unless you have big hands! 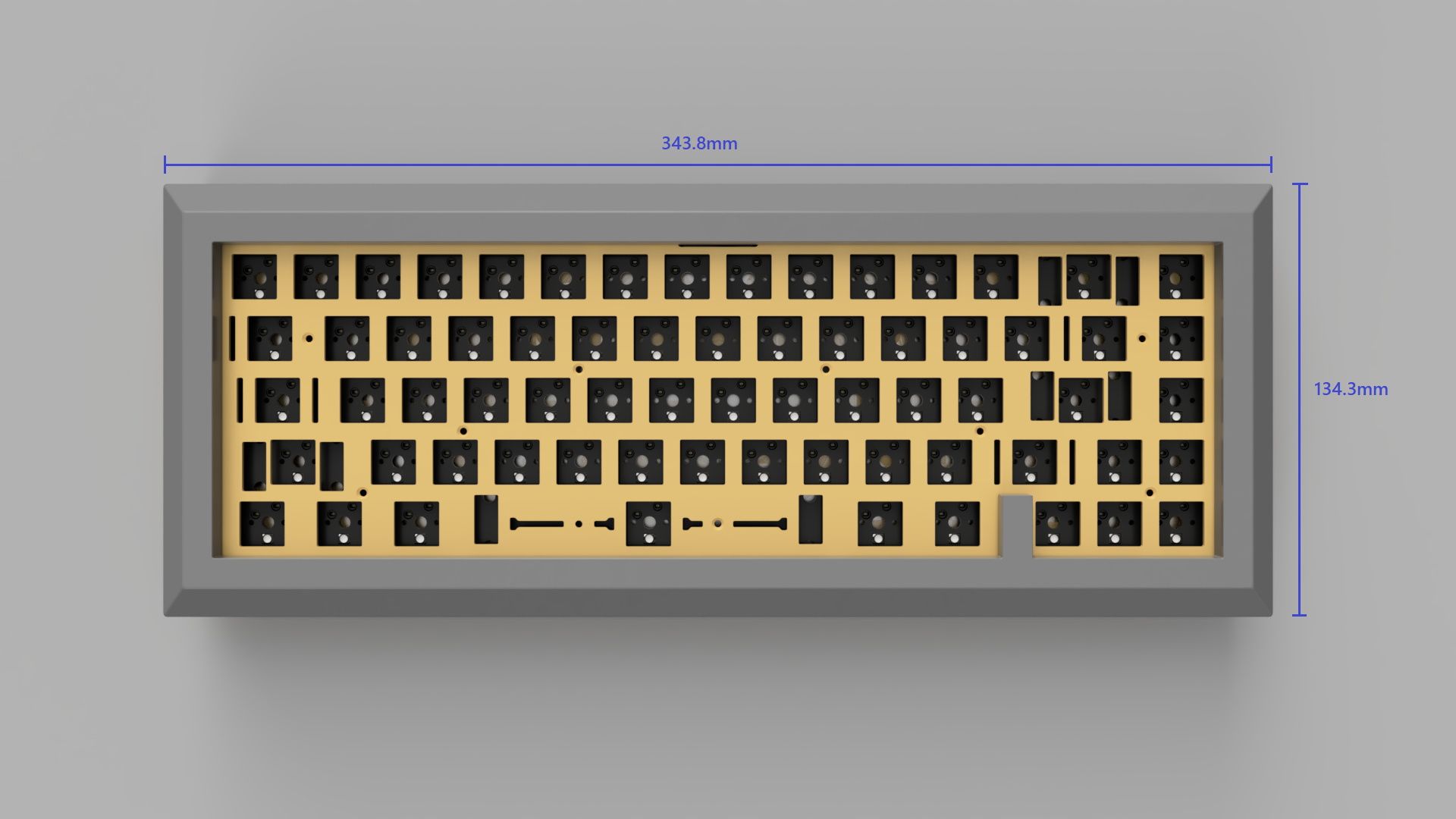 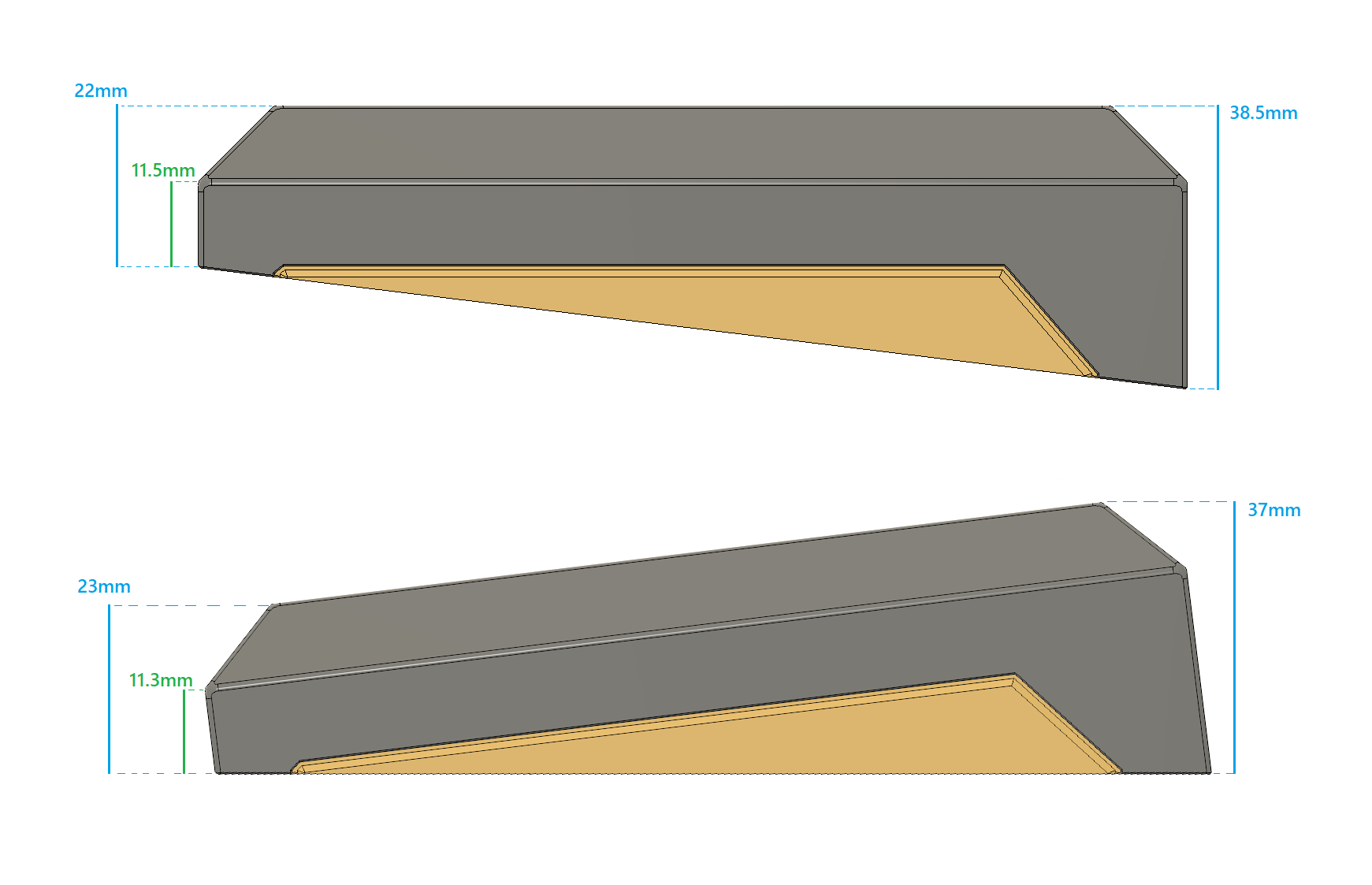 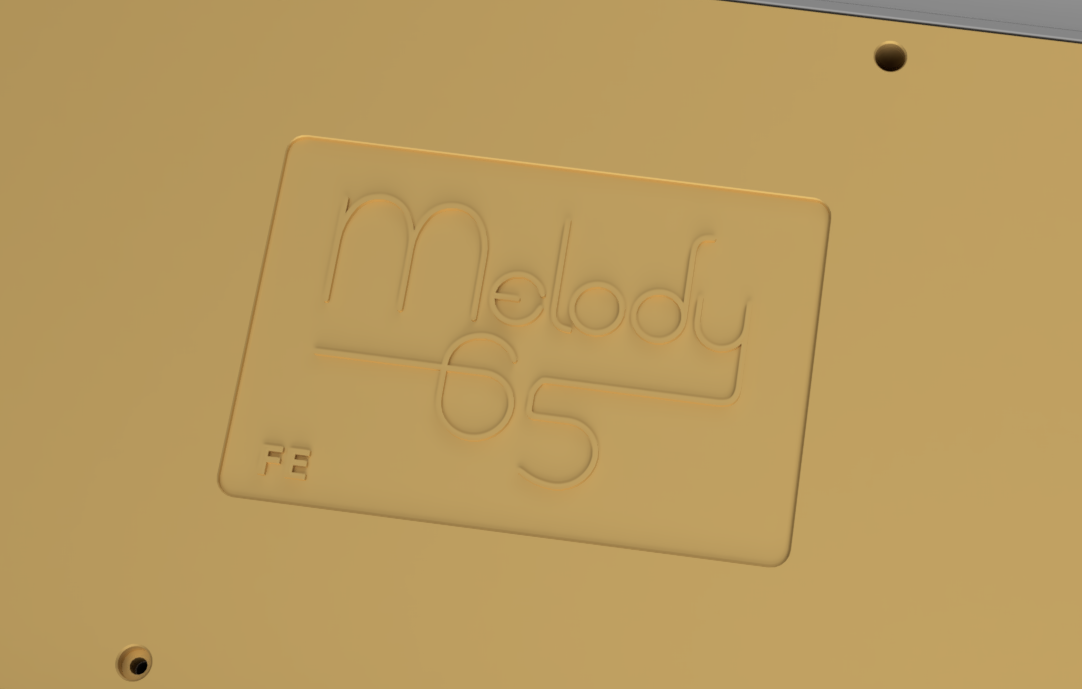 Back Type-C hole :
Given how Type-c connects with cables, if the back of a keyboard is totally flat with the connector, the cable would always show some part of his “male-part” from the very top of the keyboard.
It was made a small recession-hole to make the cable more aesthetic once connected 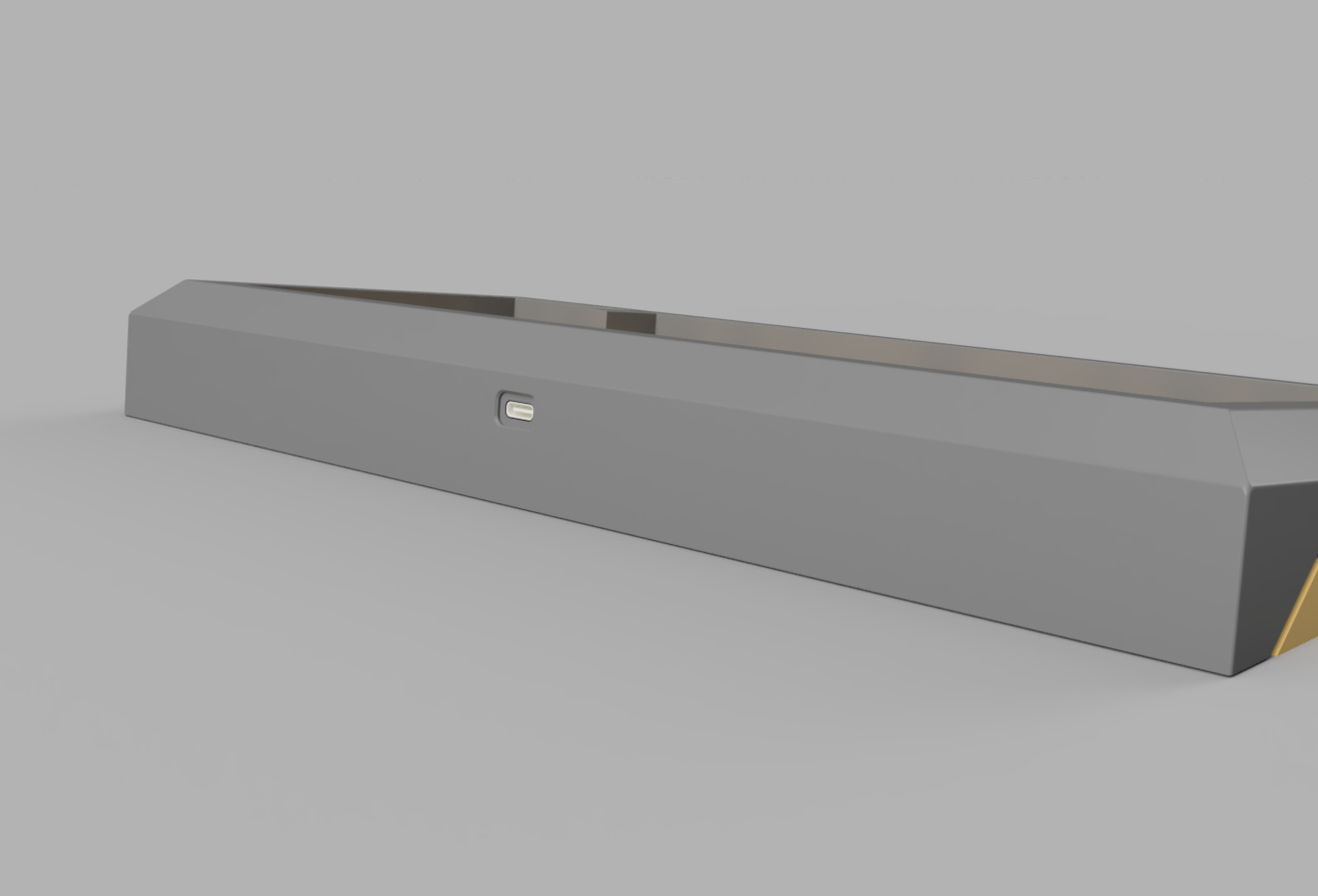 Screws :
All the screws of the keyboard are now m2.5, Founder is sure to include gold colored screws (probably titanium screws, plated in a gold color, not brass screws because these are too soft).
For standard we will see!

PCB :
Since many asked, the PCB showed on Taeha Types stream wasn’t the final PCB, it was just a prototype PCB.
The hotswap PCB will be some kind of KBD67MKII (v2), while we must still understand which will be the exact final Standard PCB.
Also ESD should be included with both the PCBs, but we will make sure to confirm this with Wei again (we should ask him again at this point).

I believe that even if these improvements might end up to increase the price slightly on our end, it could be appreciated for everyone to have a better keeb.
Let me know if you have any question, and thanks for joining our GB

PCB Mounted.
The GB units reached the limit (525 units) so it wasn’t available anymore, but i see that 2-3 people asked the refund, so there are 2 units of a specific color/configuration still avaialable.

UPDATE from KBDFans
Production is expected to finish at the end of April.
Unless something unexpected arise, shipments will start in May!

EDIT: Founder edition will be a little late, factory will give them an eta on the FE too (soon, not sure when at this point)

WOOOOOOO! I was ready to wait till september for this one!

(Also will ship around my birthday so perfect timing!)

I trust Wei on that May prediction

The only one that should be late a bit is Founder Edition, they said me today morning that the Founder Bottom production will start April 20 and is risky because is a very large surface of brass.

Update 1
Aluminium case cnc basically finished, for now i have only these new photos, anodizing also started, will post other colors when i have.
Mini album (4 photos): https://imgur.com/a/jjl4412 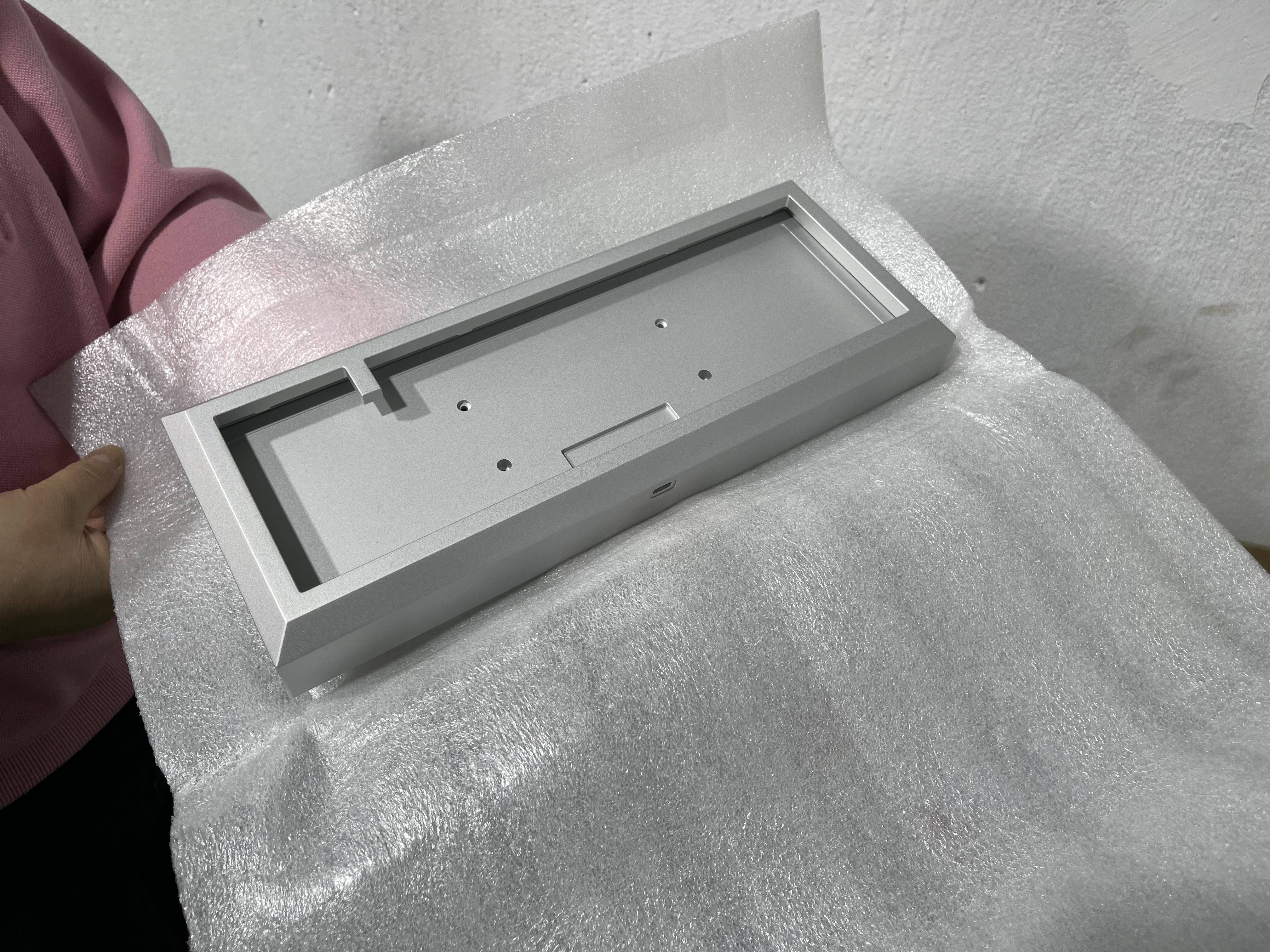 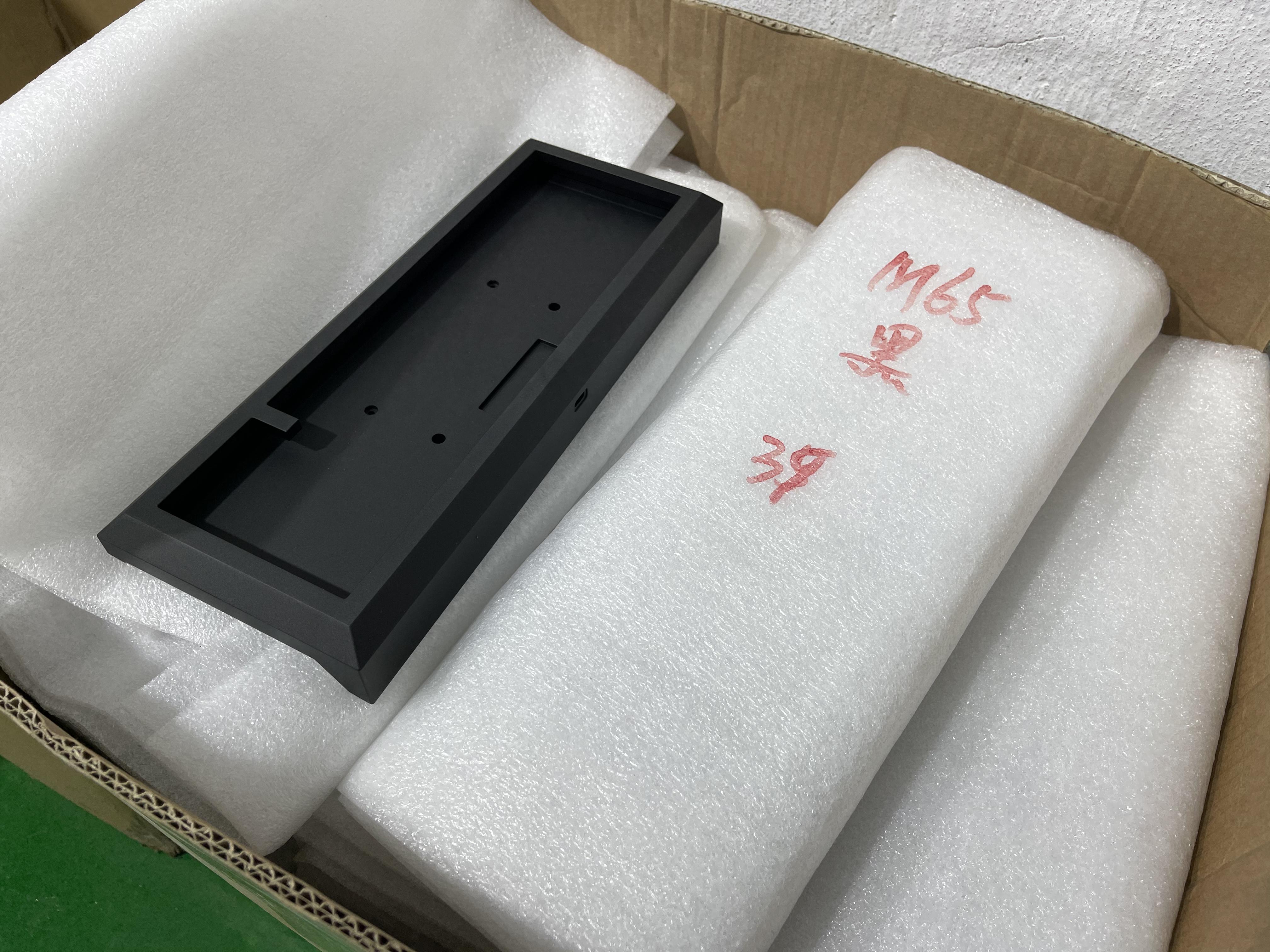 Regarding CNC now they are focussing on Polycarbonate bottom

Update 2 (IMPORTANT):
They informed me that they have to give up on the 35 TOP Polycarbonate because they can’t find a Raw PC block thick enough to cnc it.
Wei looked for many suppliers but could not find any, top is very thick and apparently even big China can’t offer such a piece. They tried hard but failed, these supplier said that they have never even produced such thick material.

Basically, 35 people bought the full PC (on a total of around 550 keebs) and full PC can’t be done due the top being too thick. THIS IS NOT AFFECTING PC BOTTOM, bottom PC is in production.

They said they will contact these 35 people through mail directly trying to propose a counter offer, but if you don’t get a mail in the next days, feel free to contact me as well.

What you can decide if you are one of these 35 people:

UPDATE 2:
All Aluminium keyboards are ready, including brass weight, we are just missing the daughterboard at this point. Once the daughterboards arrives, they should be most likely ready to ship, so let’s say that the keebs will start to ship in about 15 days more or less. Hopefully nothing else happens. The only color not ready is Blue (which was re-made), but i believe that once the daughterboard are ready, blue might be ready as well. 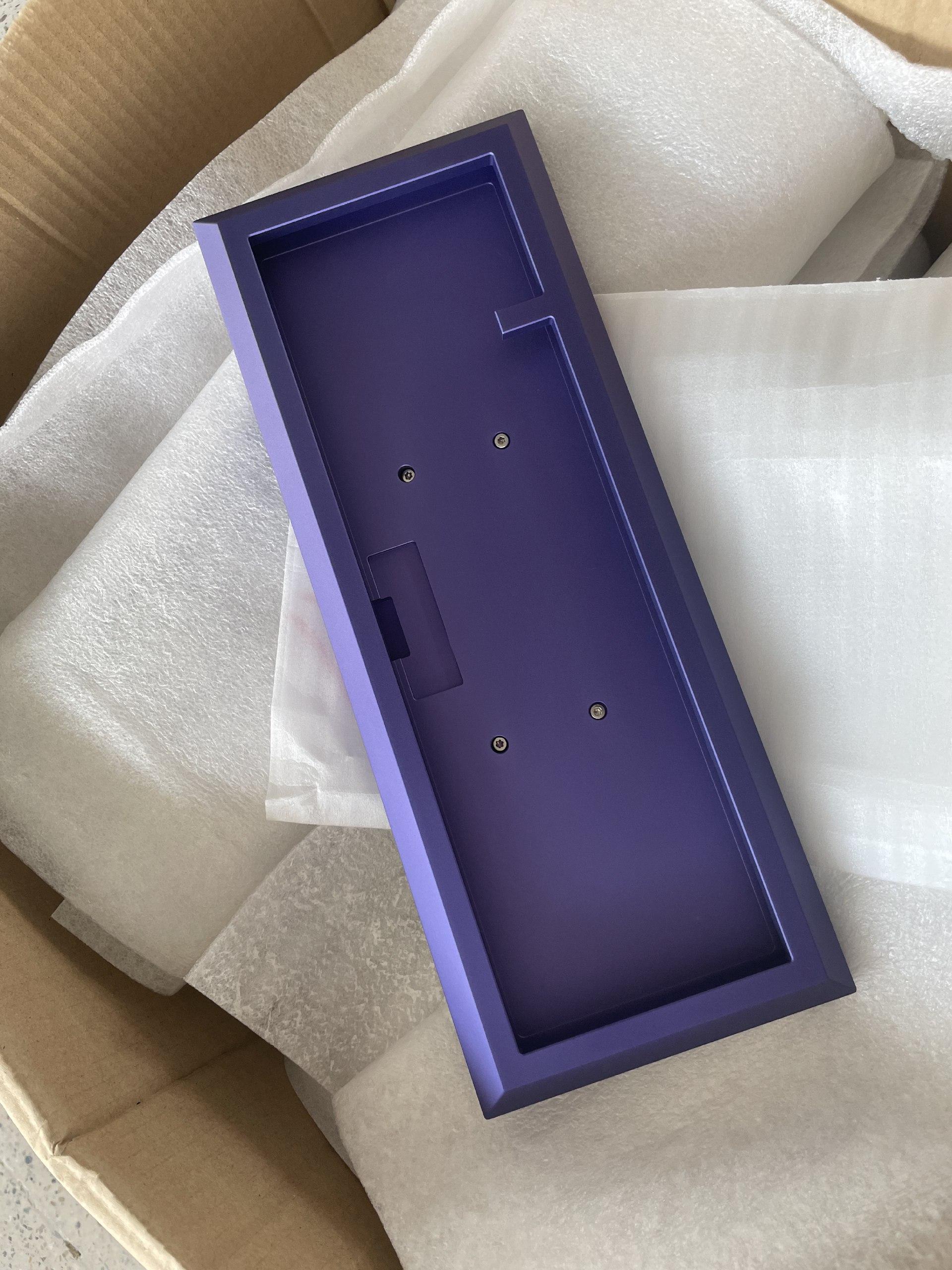 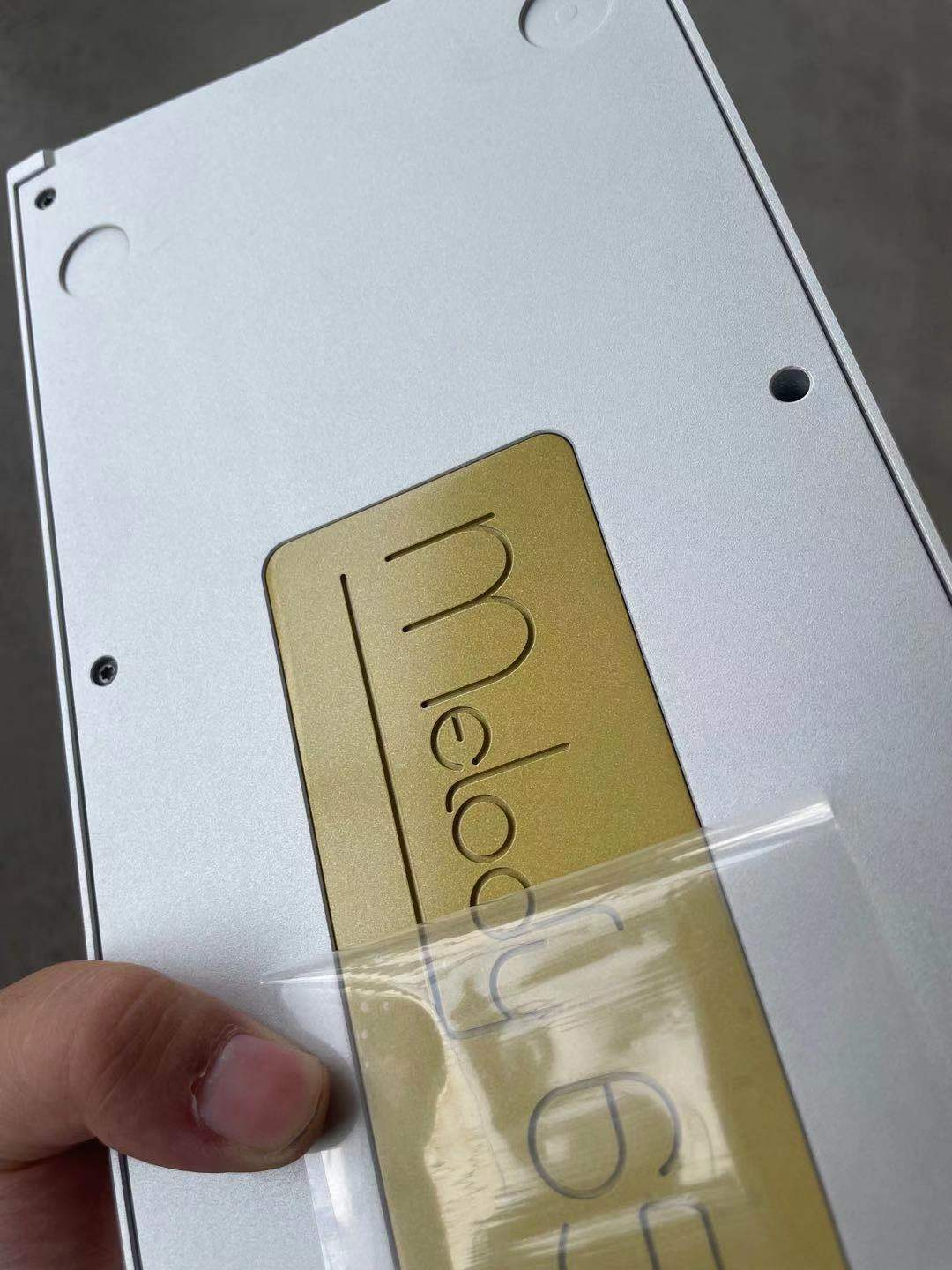 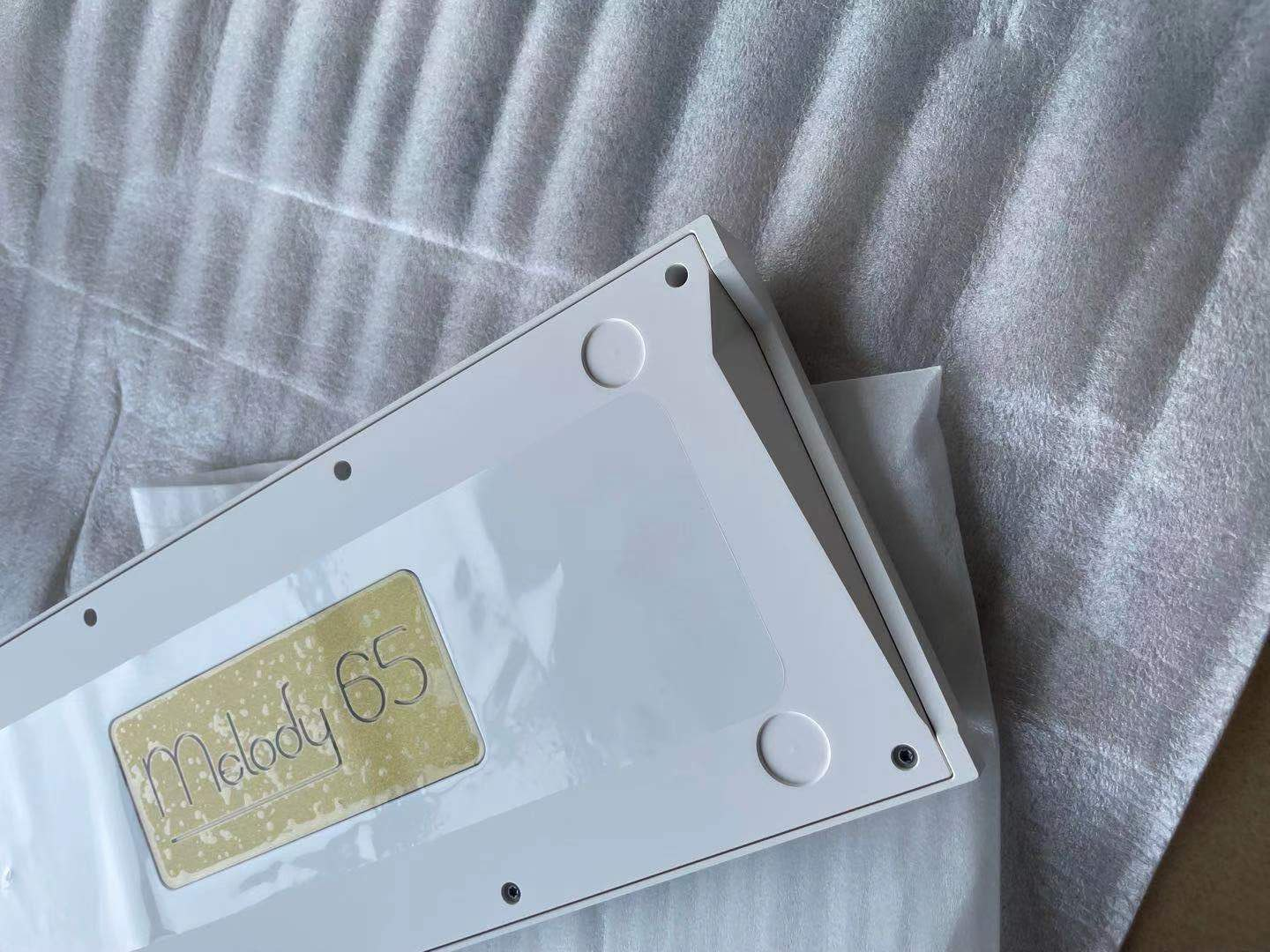 Full album of anodizations here: https://imgur.com/a/nobrjaI
(the thing on the bottom of the keyboard is just a film to protect brass, just saying this captain obvious thing because on some photos on mobile you might thing that there are bubbles or stains)

UPDATE 3:
PC and Brass bottom - We are discussing this thing with KBDFans, will get an update before Friday, hopefully in 48h from now.
On brass this was the status 20-25 days ago, so i believe that on the next update we will see good news on founder bottom.
On PC, there is much going so please hold for the next update that will be this week.

UPDATE 4:
Box: the box changed. It was a magnetic thing before, but KBDFans said that is not appropiate for shipping such a heavy boards and parts cannot be separated in such a package. Nothing to do about costs or other, in this box the parts will arrive separated: keeb, pcb, plate, other… and the shipping will be safer.
Album here: https://imgur.com/a/wjY3hAE

TL;DR Hopefully shipping starts in the next 2 weeks, sorry for the problem about daughterboards, will let you know when i have other news

do you have any updates on when the FE will be ready to ship.

Sorry, I have no update on PC bottom and Founder bottom, both are still in the production or post-production phase since a while now, hopefully there will be updates soon.

The version that started shipping or arrived is the alu+alu version.

any updates mote updates on how far along FE bottoms are.

Yeah, at the end of the last week KBDFans said that MAYBE the current (this) week brass bottom might arrive at the warehouse, so i would really expect them to actually arrive between this and the next week.

On about 550+ total orders, about 85 still must ship. Basically what didn’t shipped: