My bestie, who isnt into keyboards at all and suffers my babbling like a champ,
showed me this:

I’m a sucker for mechanical keyboards with wireless as they’re few and far between, but I am admittedly a little tired of models that use plastic as the base material, so I will probably pass.

Projects like the Skog Reboot and BT60 PCB have already proved wireless can play nice with more premium materials like aluminium. I’m on the lookout for things along those lines now.

That’s not to say this keyboard won’t be good of course. I’ve heard really good things about it in Japanese custom keyboard circles.

To elaborate upon my original meme-y impulse…

I’ve become a firm believer in the value of well-made plastic keebs alongside my existing love for finely-crafted slabs of aluminum, brass, et cetera. In that vein, I actually quite like the “THIS IS PLASTIC” thing they have going on in one of the themed versions.

The only reason I started looking for a metal keeb in the first place is because the plastic case of my original Ducky One had a loose bit at the front, where I usually rest my thumb. I could displace this panel of plastic, and it creaked as I did so. The keeb worked fine - but that squeaky creaky bit kept it from feeling premium.

The metal cases I used afterwords accomplished what I was looking for there; a nice, solid feel to the construction.

On down the line, though, as I explored more aspects of keeb aesthetics, acoustics, and haptics, I discovered that plastic isn’t always inferior, depending on one’s priorities. While my favorite keeb to look at remains an aluminum one - my favorite keeb to type on (and to listen to) is made of plastic.

The difference between that one and the Ducky is thoughtful construction. The plastic itself isn’t any better, it’s just arranged better. That thoughtful arrangement of various plastics leads to a typing feel and sound that I just can’t quit. With that in mind, the Mojo68 seems to me like it has quite a lot of potential, especially since Buger.Works is involved, being responsible for another plastic keeb I’ve heard much praise for.

Unlike my own favorite plastic keeb the KBD67L and other not-too-dissimilar projects like the Ikki 68 Aurora, Portico, and even the Buger Box - the Mojo is well over the $200 line, assuming you didn’t go for any of the early-bird discounts. So - it won’t be enough for it to merely meet the performance of the new crop of entry contenders - it will need to have some kind of material, obvious improvement in some way.

If the Mojo68 were priced like the KBD67L, I’d be all over it like words an a newspaper - but it’s not, so I’m not. It’s less that I don’t think it’s worth it - and more that I don’t know it’s worth it. It certainly looks promising in terms of the construction, mounting style, and even the aesthetics. It’s well thought-out, nice to look at, and I do appreciate the lack of visible seams on the sides. The NK65EE managed that, too - but at the cost of a very squeaky chassis - so for my extra dosh, I’d expect the Mojo to feel and sound premium.

Novel and sightly as it was, the Mojo60 wasn’t on my radar simply because of the layout. I love the look of a 60%, but I can’t live without my nav keys - so at very least, the Mojo68 is something I would consider. (That is, if I didn’t already have plenty of keebs I’m totally satisfied with.)

I’m interested to see reviews if and when those come around, as I do think the design looks promising in terms of user experience - and I do like some of the themes they have going on. 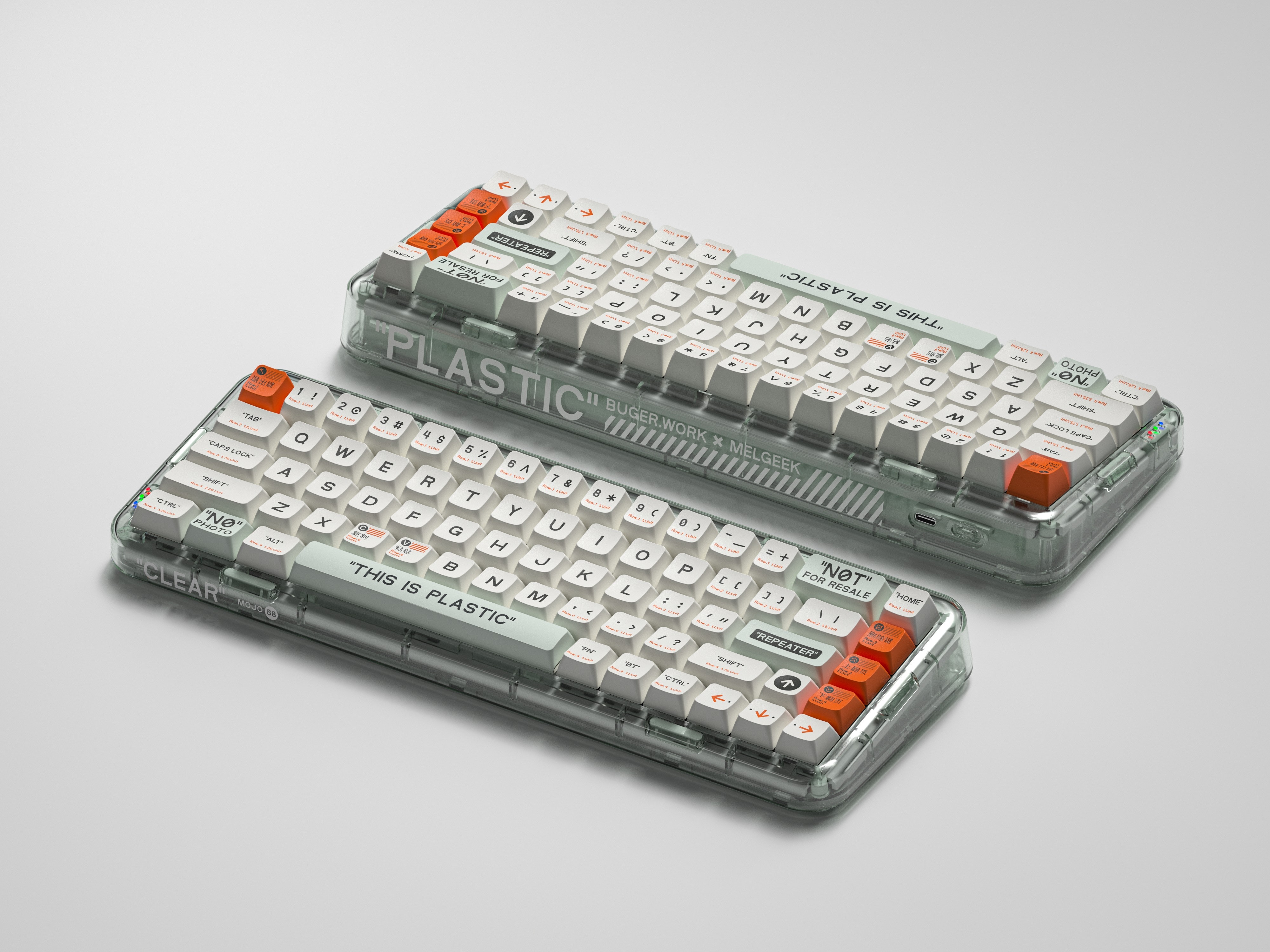 It’s busy - maybe even kitschy or tacky - but there’s something about this look, complete with superfluous overt labeling, that I just really enjoy.

With the “Plastic” one, I can’t help but think of the iPhone 5c, and its ads about being “unabashedly plastic” - I actually liked that thing, specifically because it was made of not-crappy plastic. It’s nice enough to not feel like a gas-station toy, but not so precious that I’d hesitate to use it without a case. I like that it’s not a piece of pocket jewelry.

That’s the same sort of thing I want out of a daily-driver keeb; nice-looking, well-made, pleasant to use - but not so fine as to be precious. It remains for me to see if this keeb rides that line or falls to either side; though I’ll say I don’t think the price is helping to push it in the right direction, nor is the gloss finish.

I think those things might put it into a sort of “no-man’s land” of price and perceived quality, potentially alienating a wider audience in favor of one specifically interested in the aesthetic and construction. If I didn’t already have too many keebs (at least for my current storage solutions, we’ll see about the future) I’d be pretty tempted by this one, if for no other reason than it seems like it would have the kind of typing feel I like and wireless is a plus for me; and I think it has potential to be a very strong and versatile, if niche product.

Have to use their custom software to program it’s not QMK/VIA… Also the plate is bent around the edges so you better like the plate it ships with!

Otherwise it’s a sweet board.

I have a wireless Cora60 and a wireless G60 coming soon. That should give me my wireless fix.

this was what I told my bestie.

I got a 99Euro nk65 Superuser coming up and a kbd67lite that for me fit my Unicorn keyboard and for 10 bucks more I could ahve gotten it with bluettooth.

That’s the same sort of thing I want out of a daily-driver keeb; nice-looking, well-made, pleasant to use - but not so fine as to be precious. It remains for me to see if this keeb rides that line or falls to either side; though I’ll say I don’t think the price is helping to push it in the right direction, nor is the gloss finish

Totally agree with this point of view. To that extent, I think a “workhorse” keyboard like the production boards from Leopold, Filco, Varmilo and Cooler Master fit this role well

I am never gonna unlove my Leopold. One of the best mass made keyboards ever.

I’m a sucker for mechanical keyboards with wireless as they’re few and far between, but I am admittedly a little tired of models that use plastic as the base material, so I will probably pass.

I just found this: Taekeyboards as always with a top notch review! 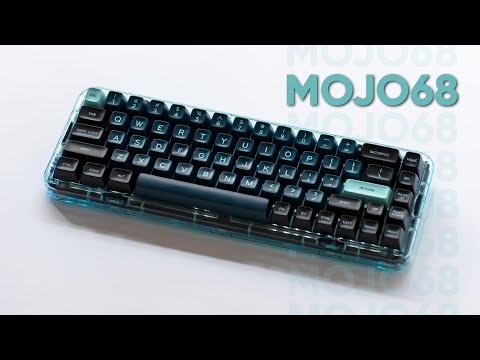 With the “Plastic” one, I can’t help but think of the iPhone 5c, and its ads about being “unabashedly plastic” - I actually liked that thing, specifically because it was made of not-crappy plastic. It’s nice enough to not feel like a gas-station toy, but not so precious that I’d hesitate to use it without a case. I like that it’s not a piece of pocket jewelry.

This was a really enjoyable write-up to read. The iPhone 5C is exactly what this keyboard and the Rama Kara makes me think of, so plastic isn’t necessarily a material I’m opposed to. In fact, I agree with you that it works pretty well for MelGeek’s design language, together with some embellishments that seem to want to pay very close homage to Virgil Abloh’s work with Off-White. It’s even a breath of fresh air amongst keyboards of late that seem to focus on more premium, heavier materials with a far more streamlined visual presentation, though it does unfortunately continue the Reddit-y trend of ‘hypebeasting’ the hobby.

Yes, definitely, and the relative obscurity of ZMK makes wireless in general quite the challenge. A few creative folks like those at Percent Studio and Polarity Works have tackled both challenges admirably, though, and I find myself holding back on backing another plastic wireless keyboard, because for me personally, it’s time to move on. That said, this is entirely a selfish perspective from a person who does not dabble in the producers’ side of custom keyboards at all, of course! I respect the Mojo68 project for what it is.

I had a little bit of a think-through about this board, I felt that there’s an opportunity that they could’ve seized…

This could be used as a great advertisement point - partner with some plastic recycling programs and mentioned that their plastic was sourced from recycled components. Pilot pens did something similar to great success 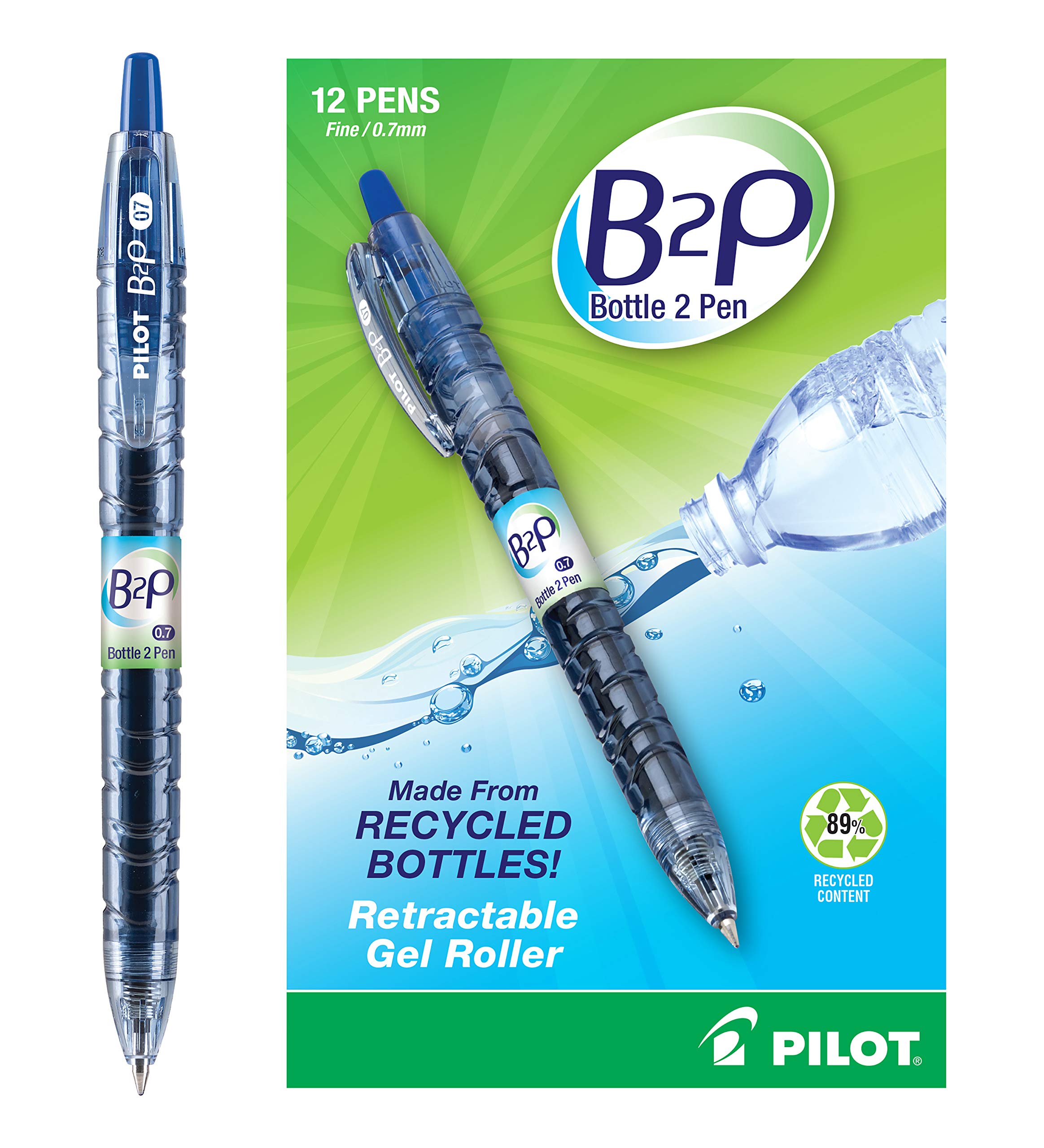 Now imagine if MelGeek did something similar to ePBT Ivory where there was a humanitarian/charitable cause behind the project. I think it would have been an even greater hit!

I’ve got a set of the “Plastic” keycaps that I bought from Drop some time ago. In the images for those caps, there was this cool, clear, plastic board that was clearly intended to accompany them, but at that time I couldn’t figure out what it was. Obviously now I know it was the Mojo60, but until this board arrived I never put it together.

So I’d just like to thank all of you for making a whole 'nother thread because it broke what little self control I usually have and now I went and supported the Kickstarter for this board.