I think they make that key for the Steel Series 6GV2 keyboard.

I think that’s perhaps a bit of a bold statement. My impression is that the legends across key groups(alphas, numrow, mods, etc) are inconsistent in their styling, exemplified by numpad having centered legends vs the rest of the alphas with upper left alignment, tend to be quite thin on the mods, and frankly not that nice to look at. Additionally, I find the top edges of the caps significantly sharper than similar profiles, tends to remind me of cheaper caps. Caps may be thicker than some offerings, but in my experience they’re inconsistently so even across the same row. Not that big of a drawback in usage but moreso overall quality. I think perhaps the worst thing in my experience was paying $100 back for subpar quality with Jukebox. This set has that covered, so at least you’re now getting much more for your money, but I’d still say you’re getting what you pay for here. It’s a very solid $40 set, but I would be hesitant to compare the profile to pricier ones for its drawbacks.

Compared to the quality and feel of stuff like GMK, SP, Maxkeys, or even JTK it was just disappointing, especially when like I said I needed $100 of kits for compatibility. This set obvs fixes the price issue but you’re getting exactly what you pay for still with the Cubic profile.

This is just Tai-Hao, but better, not GMK, but cheaper.

“Win”, “Menu” and “Fn” seem to be a different font and larger in size. Weird.

I received my Tai Hao Cubic BoW. It is a very interesting set.

It looks like Tai Hao has new molds for Alphas. All prior Cubic sets that I have seen had heavy/bold Alphas.

They appear to have finer Alphas now.

See the comparison of Tai Hao BoW to Tai Hao Concrete below: 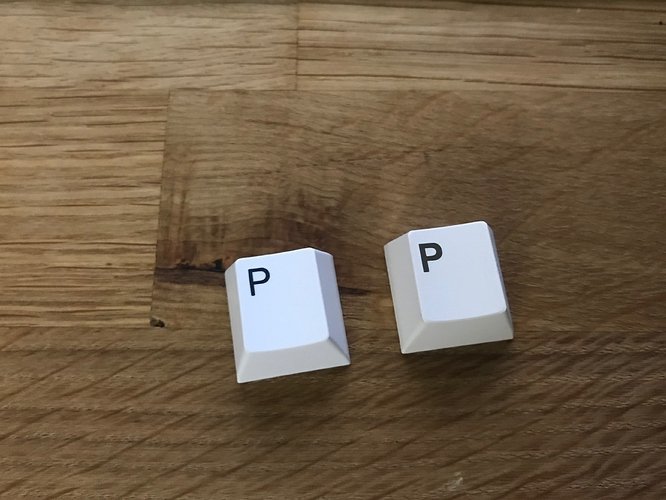 Manofinterests pointed out in his latest video some other inconsistencies, but I wonder if some of them don’t have to do with mixing two different sets of molds.

Also now I cannot unsee the slightly off kerning of the “t” at the end of Shift.

Still a bargain for $40, but I think the earlier Cubic Concrete looks more consistent and the modifiers actually work better with the bolded Alphas.

Hi, would it be possible for you to post a picture of the full set? I would really appreciate it. I’m really intrested in it!

Here are some more pictures that will hopefully be helpful. Overall I find them very sharp, but I question some of the decisions Novelkeys made on choosing which molds to use (like the fat/bold Numpad which does not match the Alphas). 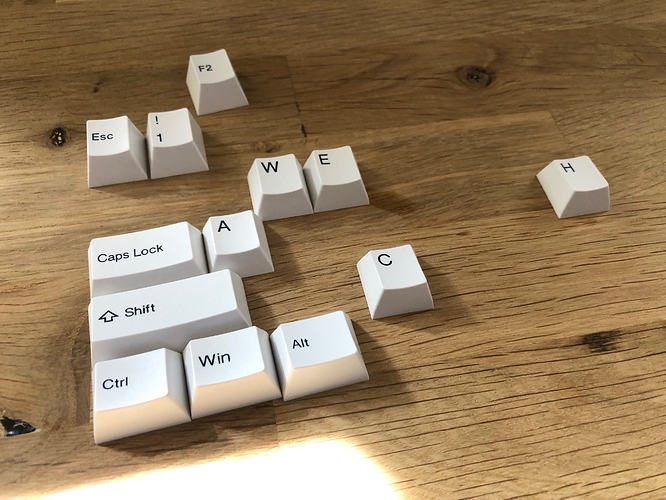 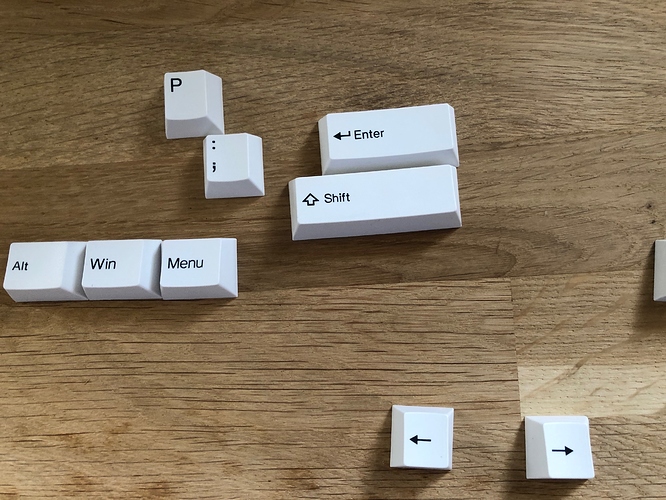 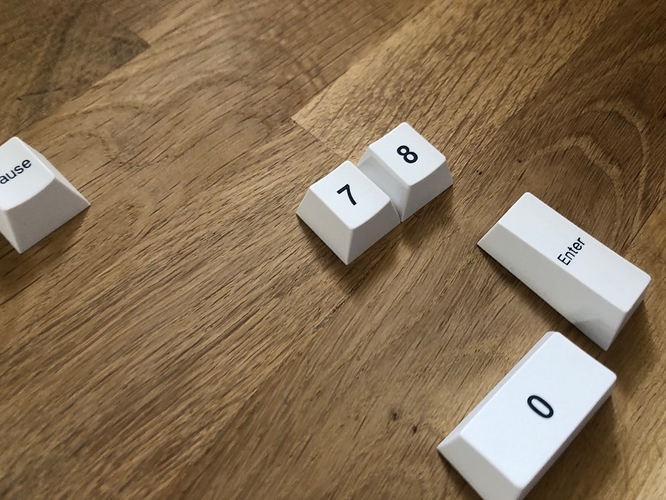 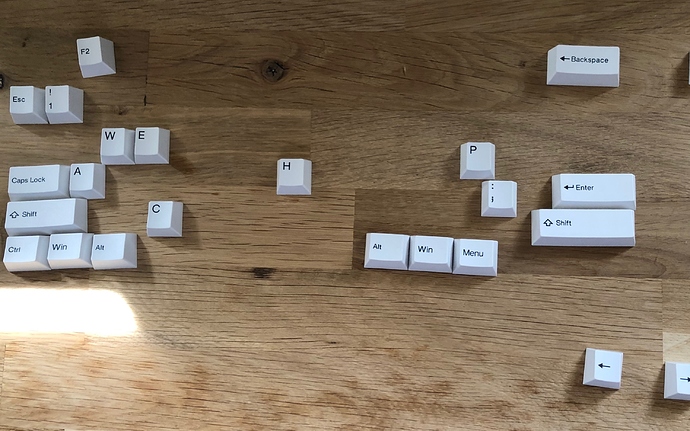 Dang, the numpad legends are actually centred. Looks like the modifier font sizes are not consistent either. Was really hoping that the set would be much cleaner. Either way, I guess this isn’t unexpected considering the low price tag compared to more premium sets.

If it wasn’t for the Win/Menu and those godAWFUL centered numpad legends, I’d be picking up a set. Shame. I hope they fix it up for WoB and future runs.

I ordered one, I’ll never use the numpad… I dunno why they even bothered to include it, since part of the appeal is the low price point it seems like they could have saved a few bucks and not included it.

Having a cheap keyset attracts fullsize users, because they’re the most likely to have prebuilt boards.

Generally yeah, and that’s the general appeal of cubic, but this a novelkeys branded set as well and they got their name selling switches and high end key sets, so I’m not sure that it’s the general audience for set in particular.

Thanks for the pictures! A lot of the choices were made to keep the costs as low as possible and not have to pay for more tooling. Using existing molds allowed us to have our price point at the way it was. If we changed up more, it would have added costs quite significantly.

Why not use the existing numpad legends, out of curiosity?

Is there some correlation between color and what Cubic molds Tai Hao can use?

For example, they already have beautiful Cubic icon molds for Win and Menu that look much better than the strangely proportioned all text Win and Menu.

Along the same lines they already have cubic sets with traditional Numpad legends that aren’t bold and centered.

Making those two small changes would be a huge improvement to the set and/or any future sets you run with them.

That being said, I still love this set especially at $40. I love the Cubic profile and am glad Novelkeys put out a new set.

But if you look at my Tai Hao Cubic Concrete set, you will see they do not suffer from the same molds as Black on White: 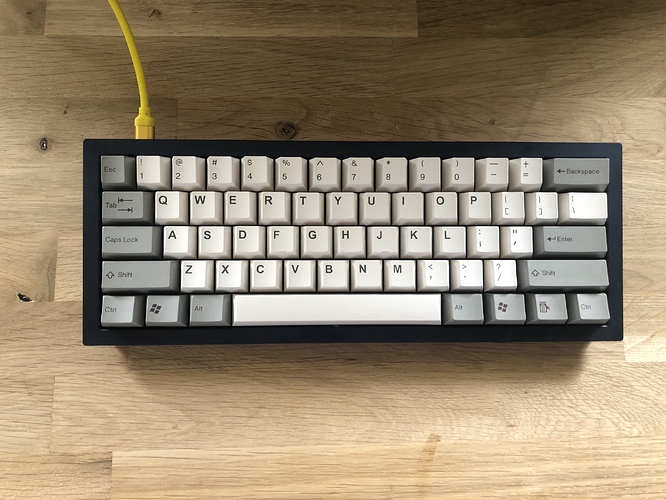 Thanks for the insight Mike! It really is a good start for Tai-Hao to get their foot into the higher end enthusiast market, if that’s what they are looking to do. Maybe just keep working with them to do small changes at a time? Cause honestly if they can get their sets looking uniform, add some more keys to be able to cover most layouts out there, & eventually fix any other issues with the cubic profile molds, I’d be willing to pay even a decent bit more than the $40 this set ran for, for them. Although as they stand, as long as you don’t use the numpad, win keys, & menu keys it is a pretty consistent looking set & great value at $40! I haven’t order a set yet, but I am planning on grabbing one this fri. if they are still available.

They don’t (or didn’t at the time) have the compatibility support of all the numpad options.

I am honestly not sure on that. We were only given one option for the legends. For future sets we will probably use those icon mods.

Well it sure wasn’t that Fri. I thought I’d be able to grab a set, but I finally just picked one up. Been wanting a BoW set forever & haven’t found one I’d be willing to pay the aftermarket tax on. GMK Stormtrooper & Minimal go for outrageous amounts, then I never see any ePBT BoW sets or JTK BoW (I think JTK made one?) sets up for sale ever.

So for now this seems to be my best bet for an affordable, decent quality, high compatibility BoW set. From the pics in this thread everything other than the numpad keys looks pretty good IMHO & the numpad is not an issue for me as I use mostly 65% boards. Also this will finally let me try Cubic profile out! I’ll definitely report back once I get them & let you guys know my opinion on them.