Agreed. While we don’t know the full story of Wei’s hand in this, he’s trying to set it right, and that’s what’s important.

There’s a huge difference between selling something that is “inspired” by a design and selling a literal counterfeit of that design under the same name. I’m surprised this has to be pointed out. It absolutely is a moral issue. People bought the switches thinking they were the real deal. That meant they paid more than they likely would have if it was a random knockoff, and took business that might have otherwise gone to Zeal.

I’m fine with giving KBDFans the benefit of the doubt generally speaking, and I just placed a new order with them, but let’s not pretend that this was okay.

Thank you everyone for keeping things quite civil in this thread especially around a touchy subject. I would ask that we keep speculation to a minimum so that names aren’t incorrectly and unnecessarily tarnished.

The transparency is certainly welcome. I only hope Zeal, Gateron, and KBDfans are satisfied with the resolution.

Did i read that right? The dude counterfeiting is getting counterfeited? lol

Did i read that right? The dude counterfeiting is getting counterfeited? lol

A truly wild ride. At least he came forth, admitted his wrongdoings, took the financial consequences, and has excused himself from the business altogether.

This is wild. Im also bummed that the T1s are basically extinct as a model now. I actually did like the ones I received.

I was going to put my T1 with smoke housing on a board, but now I think I’ll just store them and to maintain the “never soldered” quality. And maybe some day sell and gain some money

People are buying an OEM version on alibaba that is apparently identical except it doesn’t say kbdfans, not sure if they will become a sort of collectors item in the future or not

A part of Zeal’s email update: 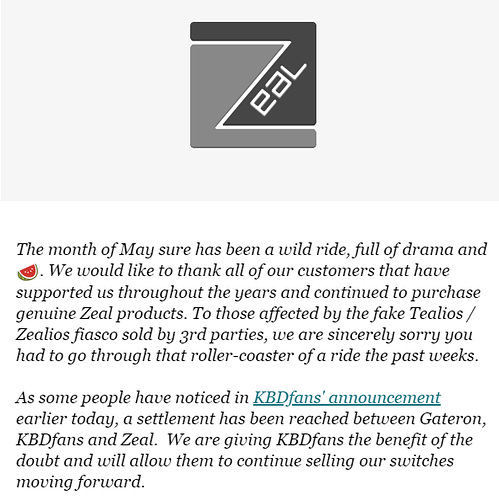 I’m glad a end has come to this situation, but I’m still not letting Wei or KBDfans off the hook so easy. I requested a refund on the Zealios I bought right after they got the fakes in the 2nd day this was known & I haven’t gotten so much as “Were very busy right now, but have your request” email back from them. I’m not gonna push the situation since it was just for a batch of 60 Zealios, but I for sure will never again buy from or recommend KBDfans if I don’t hear anything back about it. I’m really not expecting to either based on some private conversations I’ve had with other people who managed to get the ball rolling on their refunds.

The buzz is that “Stealios” are a hot collectible now. I have no idea, but you might want to check r/mm if you can’t get a refund.

This is such a bizarre hobby, sometimes.

New wrinkle as of today: https://drop.com/buy/everglide-switches 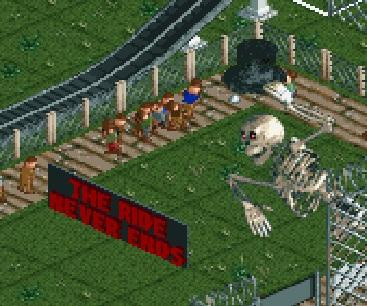 i want to get off mr. zeal’s wild ride

Is that roller coaster tycoon? Damn it’s been a while.

I have discovered that two of my boards with fake Zealios have single switches that are reluctant to register. The L key on one board and the M key on the other will just sometimes refuse to work. It’s become a real problem, since every few times I type the letter, it just doesn’t show up. I heard someone on reddit claiming that they had some issue with their “stealios” failing, but I don’t recall the details. I was wondering if anyone else has experienced this. I don’t think I’ve had this happen with any other switches before. Is there anything I can do aside from replacing the switch?