I’m planning on a small split keyboard next, and I’m thinking about the best layout I could use on such a small thing. I don’t mind chording much, but a big problem is remembering where each non-standard key is, so I came up with a sort of a system.

This is my current plan: 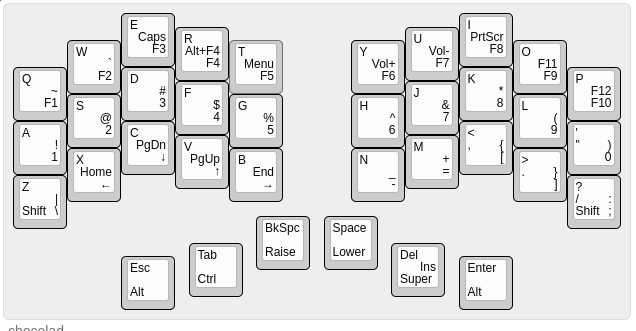 The thinking is as follows:

This gives me some nice properties: keys are mostly where you expect them, numbers are on the home row, symmetric symbols are all on the same keys.

There are also some problems: you can’t press alt+esc or ctrl+tab, the backslash is in a weird place, the grave accent and tilde are not even on one key anymore, the arrows are on the left hand and not in a T shape.

I’m testing it right now using my Flatreus with some keycaps removed: 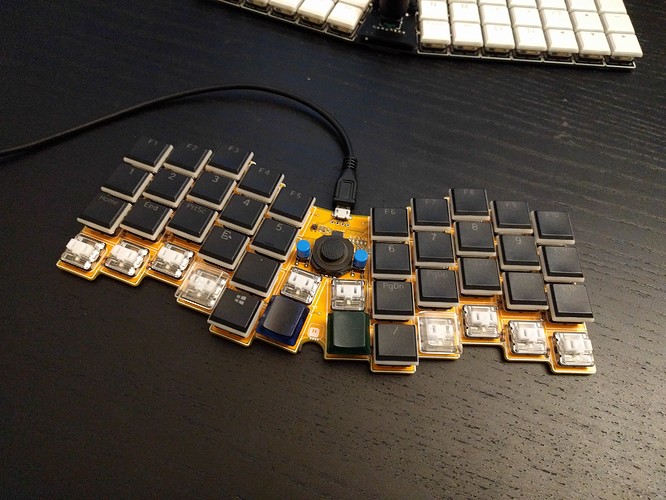 What do you think?

Dude. This is freaking nuts. Love it. I appreciate having to study a keyboard before attempting to use it.

There are also some problems: you can’t press alt+esc or ctrl+tab

Bummer. I can see ctrl+tab being used a lot when switching between tabs and apps. Still looks amazing af buddy.

There are also some problems: you can’t press alt+esc or ctrl+tab

Bummer. I can see ctrl+tab being used a lot when switching between tabs and apps. Still looks amazing af buddy.

One solution for this would be to have a second Ctrl (and third Alt, as I use AltGr for accented characters in my native language) on hold/tap on literally any key — only problem is that I don’t see which keys would make sense for this.

That is exactly what I don’t want — keys arbitrarily rearranged without a rhyme or reason, that you have to learn by heart.

Fair! I don’t use it out of the box, I use it in QWERTY layout, customizing where some keys on layers are because I’m a heavy vim user and am used to movement keys being on hjkl. Those are simple command like flags if you flash with QMK on command line.

The key with Miryoku is the home row mods plus complimentary keys on layers. Mod combinations like Ctrl + Alt are trivial.

Home row mods are not a panacea, though. They take some adjustment. I’m not even 100% sold on them for a daily driver. But it’s very compelling in practice and I keep coming back to it.

Also, I use F11+F12 very frequently (fullscreen+devtools/save as), probably right after F5 (refresh+copy), so your placement wouldn’t fit my needs.

It’s always a trade-off between heavy optimization and ease of switching from the more traditional layouts. Personally I’m still leaning towards ease of switching. I prefer to keep most mods on the thumbs, because that lets me reach all other keys easily while holding them.

F5 is raise+T, F11 and F12 are lower+O and lower+P, those are pretty easy combinations, I can’t see how to improve it without putting them on the first layer.

CapsLock is one key I use very sparingly, even though I have it mapped to Compose in my operating system — I would certainly not put it on the first layer. Del and Ins would take priority, as I use them to copy/paste a lot. Esc is also important, because of Vim, of course.

Sure, it all depends on your workflow. I barely hit Ins or even Esc but like to use CapsLock to type more than one capital letter.

I updated the layout to add extra mod keys to be able to use them with Esc and Tab, and also added modified Esc and Tab to other layers on them — I will see which method is more convenient. The latter feels like too much of a special case. 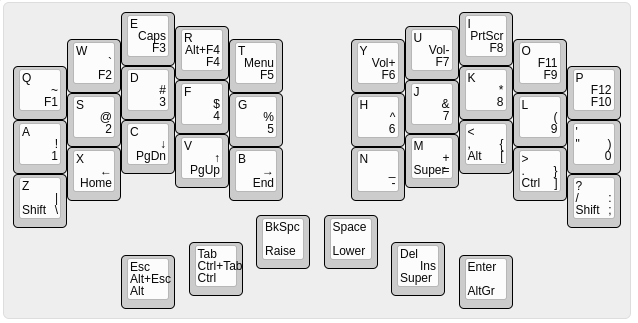 Saw this on the 40s discord and thought of this discussion. Keyboard Layout Editor

That layout made me instantly think…

I’m shocked there isn’t a split keeb called “space invader” out there.

I mean, just look at it! 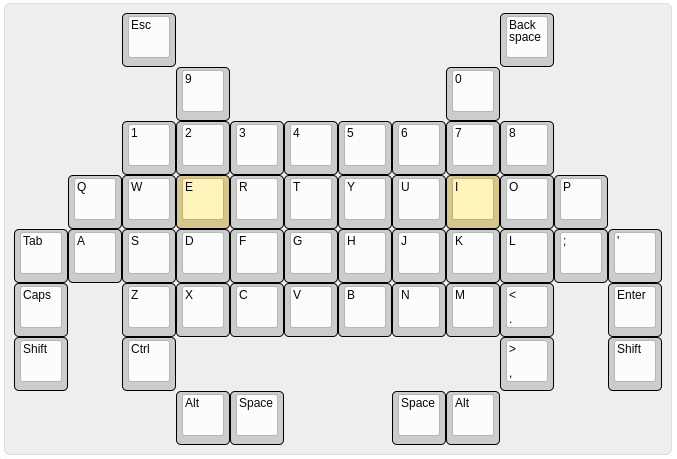