I’m thinking about working on a keyset, but I’d like to know what my limitations are. So far I know that available manufacturers and their options are:

(Edited to include more options from below.)

All Signature Plastics keycaps are available with their standard font, Gorton Modified, which is similar to Ariel. Three additional fonts available for additional fee.

GMK (Unikey):
They don’t actually spell this out anywhere that I can find, but it seems that they only do Cherry profile ABS double shots. They do list many languages that they support, including US-English paired with many different sublegends, but they do not specify a font or font options. Sublegends can be printed in separate colors from primary legends, via UV printing.

They can also do custom legends for an additional fee, with some limitations.

Enjoy PBT:
Can’t find a website for them or any solid information at all, but judging from just what sets I can find which are attributed to them they can do Cherry profile in double shot ABS and dye sub PBT. In at least PBT they can do multi-color sublegends in different languages.

They can also do the shine-through cutouts on locking caps, like caps lock. That’s nice to see. And that’s it, as near as I can tell. Cherry profile only.

Drop:
Not really a manufacturer, but you need to go through them if you want to do MT3 profile. Both dye-sub PBT and doube-shot ABS are available. Drop has a “design submissions” option in the support contact section of their website.

Melgeek:
Again, not really a manufacturer, but you need to go through them for MG and MDA profiles. No information on capability, and the only mention I can find of accepting independent designs is a request to contact them on their help page. They seem to do MDA in PBT dye-sub, and MG in ABS double-shot.

Geekark:
Manufacturer who seems to do PBT dye-sub only, in Cherry profile or “thin walled XDA.” They say they can do five-sided printing but the only examples I can find are solid color, no legends or designs on the sides of the caps. Think maybe they’re just talking about reverse dye-sub (it’s a translated page, so have to do some interpretation). They don’t seem to offer services to independent designers, so you’d likely need to go through a vendor in order to work with them.

Infinikey:
They do PBT dye-sub and reverse dye-sub, in Cherry and DSA profiles. They offer to work with independent designers directly on their website, and provide an email contact for that purpose, and they claim a prototype lead time of six weeks and a manufacturing lead time of four to six months. Other manufacturers don’t specify these times, but judging from typical group buys these seem to be better than many. Infinikey seems to have special relationship with The Key Company.

Keyreactive:
Mysterious group behind KAT and KAM profiles. (KAM is just r3 uniform KAT) PBT only, dye-sub and reverse dye-sub. They don’t have a website and exist outside of time. Probably necessary to contact a vendor who has the power to reach them. Edit: Suggestion below that they may have a special relationship with zFrontier. Makes sense to me, that jives with search results.

JTKeycaps:
The have their own CA profile, which is similar to Cherry. ABS only, legends are double and triple shot. Also HSA profile, or “half SA” - a profile similar to SA, but shorter. ABS only, double-shot. Only manufacturer that I’ve seen which advertises a triple-shot process, though the only examples of this that they give are legends and sublegends of different colors. In other words, the colors are separated from one another. It would be pretty neat if they could layer the colors to make more complicated patterns, but I don’t know if that’s possible with the multi-shot process. Seems complicated.

JTK is apparently eager to work with independent designers, and have a contact email on their website.

Maxkey and Domikey:
These are both producers of double-shot ABS keycaps in SA profile, though they use clones of the official SA molds owned by Signature Plastics. Maxkey has worked with independent designers in the past (see this comment below), though apparently it’s difficult to contact them directly. If you want to work with these you’ll likely need to go through vendors. Try contacting KDBFans for Maxkey, and Drop or KPRepublic for Domikey.

Momoka:
Momoka is a new manufacturer, founded in December of 2020, who does OEM profile PBT keycaps with all-sided full color dye-subbing, and reverse dye-subbing. They have a quick turnaround right now, three months for a current group buy, possibly because they’re new and don’t have a huge backlog of orders yet. They don’t have contact information for independent designers, so you’ll probably need to go through a vendor. Flashquark has volunteered to be that vendor.

Finally there’s this list, which isn’t quite the same thing but may be useful if you’re looking for information on another profile.

A cherry manu that’s apparently accepting group buys is Geekark. There’s a set running on Drop at the moment (all-over dye-sub PBT) but they’ve run a few sets on other vendors as well.

There’s also Infinikey (they’ve had mixed results to say the least) who does all-over dye-sub cherry sets. I believe they’re exclusive to The Key Company (in the US at least) so you’d want to go through them to start a GB.

As for KAT (Keyreative) I think that’s usually done through a vendor (so contact a vendor and tell them you want to run a KAT set and they’ll contact Keyreative). I’m not 100% sure on that but it makes sense.

Not sure on XDA either but there might be a few manus in China that make the profile. If you wanted to run something in it you could probably contact Drop as they’ve run Godspeed and Canvas in the profile (maybe others). You asked for MT3 but it should apply here, Drop has a contact form for submitting designs: https://drop.com/support?reason=DESIGNER_CONTACT (no idea how actively it’s used)

Slight correction to your original list: SP also makes the SA-P (PBT SA) profile with dye-subbing. I don’t think anyone has ever run a GB in that profile/material but I don’t see why you couldn’t. It might even run quickly as it seems things run much quicker if you use a profile that doesn’t have a long queue.

This might be a good place to visit (if you haven’t already) to see what’s running and where – shows you the possibilities:

This could be a fantastic resource. Seems like a lot of this stuff is tribal knowledge or simply isn’t something I’ve been able to find on my own.

Also, and randomly, here’s a video (no words) of Signature Plastics operation. I’m sure it’s been posted here before given the source. 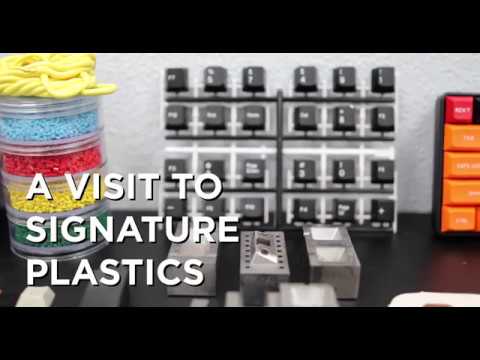 Okay, updated with new information. Thanks a lot for the input.

I hadn’t really intended this to be a resource, but if someone finds this handy then great.

I can believe that. I was thinking it was odd that I was getting so many search results for an Asian vendor whenever I searched for anything related to Keyreative. They never show up for me otherwise.

Maxkey: They make an SA clone (double-shot ABS). Coolest set they’ve made (in my opinion) is Leviathan. They seem to have a close relationship with KBDFans (a la ePBT) but I think they’ve run independent GBs with other vendors as well – Kono maybe? They’ve copied a design or two but they’ve definitely run GBs with designers designs.

Domikey: Another ABS SA cloner who has run some sets through Drop (they also have a ton of stuff on KPRepublic). Interestingly they also make double-shot ABS Topre (or EC) keycaps which are the only ones of their kind that I’m aware of – hhkb only from what I’ve seen. They do tend to copy other, existing designs so I’m not sure how designer friendly they are.

Here I thought Maxkey and Domikey were just particularly successful designers. I’ll add them, but I can’t find any information on how to contact them or do the thing. I’ll just assume that they’re a vendor-only option, at best.

@MKUltraCorp
Sorry for the ping but I know that you worked with OCM for the SA Leviathan GB. Do you know if he was able to coordinate directly with Maxkey or was that communication done through KBDFans only? And in general is there a way to contact Maxkey about running a set? Just asking because @Suds is looking to add that type of information to this wiki type post.

That was the first group buy for me and the third for OCM. He had previously run DSA 2077 and DSA Ferrous through SP/PMK on their terms.

For SA Leviathan, we ran everything through Wei at KBDFans which was a pretty easy process to be honest. The only real issues we ran into was getting design constraints to conform to Maxkey’s production capabilities, meaning round out some of the sharp corners, make bigger gaps, etc. About halfway through the process, another vendor offered to connect me directly with Maxkey but we were already in motion and running smooth, so we left it alone.

So answer and opion - yes you can run directly with Maxkey, there is a way to contact them directly (I’d have to do some serious digging to find it). However, running it with Wei was both easy and profitable for all involved - at that time anyways, I’m not sure how that would run these days as it has been nearly 2 years ago.

awesome! thanks for the info.

while we have you here, did you hear about the KAT Mizu announcement (double-shot PBT instead of all over dye-sub) and is there any chance they’re going to run KAT Space Cadet that way?

KAT Space Cadet is remaining a dye sub project. It is in production and I believe the last part they are waiting on is some change to homing caps, as the bars on them are causing some aberrations with the dye. We will likely be moving to scooped homing to resolve this.

Okay, thanks a lot for the input.

I’m guessing the list is more-or-less complete now. I do say up at the top that OEM is still missing, but I don’t know of any OEM sets by independent designers. Maye that just isn’t an option.

Well I was wrong. Momoka added, who does OEM. They also have a set with some really impressive dye-subbing. I find that personally delightful, since it seems to offer the opportunity to be a little more creative with keyset ideas.