Here’s a fun question. What acts as the end-stop for switch travel on a Topre switch?

The answer is: it depends!

Despite the “good feeling of oneness with cup rubber” claim, it seems never to be #1 on modern Topre switches, even though that is how it is characterized in the expired (now public domain) patent that describes the Topre switch architecture. 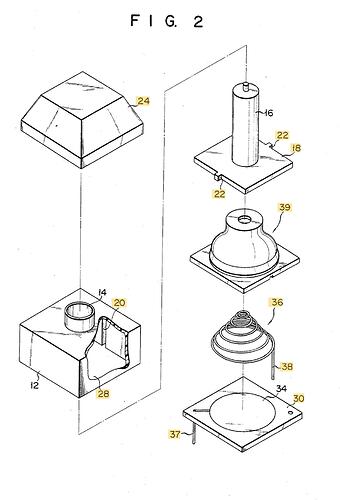 More commonly, as on stock Topre switches with stock/native Topre keycaps, the answer is #2. The interface shown in magenta below is what limits switch travel. So it’s not actually the cup rubber, as it were, that you contact when depressing the switch. The dome merely affects forces mid-travel; it doesn’t characterize the bottom-out. The bottom-out interface is just the very tiniest bit of rubber being struck by two very tiny edges of plastic. It seems that the soft dampened feel of a Topre switch landing comes primarily—or entirely—from this. 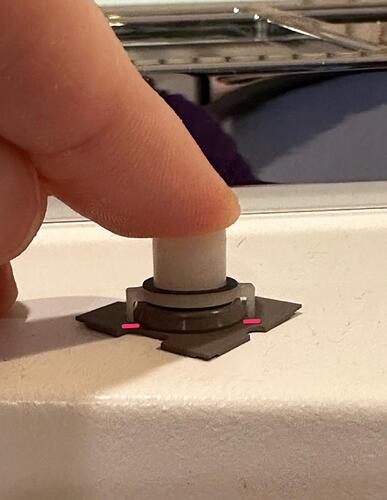 However, the exception to this rule is the Novatouch keyboard. The end stop on those (at least when using standard Cherry-profile/GMK keycaps) is actually the hard plastic-on-plastic contact between the interior keycap ribs and the upper edge of the switch housing collar. This is very easy to demonstrate with a cross-sectioned GMK keycap (painful, I know), and it seems to be true of all row profiles. 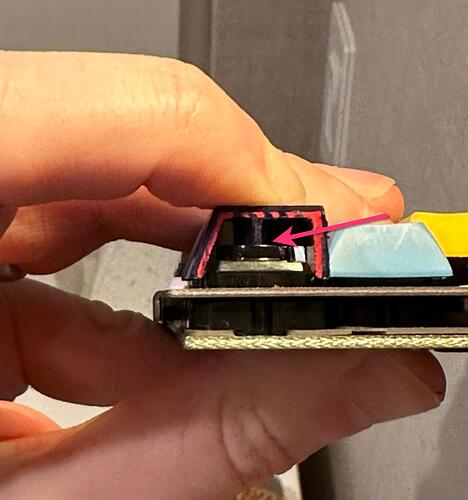 Interestingly, the above isn’t true of DSA caps, which don’t have ribs. There is about a 0.5mm gap between the switch housing collar and the upper wall of the caps.

This explains two phenomena on which I have long speculated but never had a satisfactory answer:

Well, now we know. Presumably when they made the Novatouch board they wanted to re-use Topre switch housing tooling and either didn’t re-examine (or cargo-culted) the collar design, without considering how it would interact with Cherry profile keycap ribs (widely available 3D models of Cherry caps typically omit the ribs, so it’s an easy problem to miss). I don’t have a Realforce RGB handy, but I wouldn’t be surprised if the same were also true on those. The thin wall thickness (and maybe different material) plus hard plastic-on-plastic contact might explain (what is to my ears, anyway) the characteristically less-than-stellar sound of that board.

Any thoughts or insights would be welcome.

Awesome science. Also sheds some light on why all of my Norbatouches have DSA caps on them!

recall how the Novatouch comes with O-rings included as stock, which is probably to dampen this keycap ribs meet housing collars. however O-rings reduce travel by a lot more (1-2mm) so most would not use it and the rest is history

To me what’s interesting is how those two little points of contact on the slider, making contact with the rubber skirt of the dome can feel so solid. It doesn’t seem like they should feel that way. I’m even surprised that given my gonzo approach to typing none of those legs seem the least bit affected. No telltale signs of plastic stress or anything like that.

I venture to guess that if I’d have known that up front and with an already preconceived notion towards the suitability of this for switch feel, I probably would have found something about that not to like. Mind over matter and all that.

For GMK to work on Nova housings you have to shave off those crowns, at least for the 2u.

For GMK to work on Nova housings you have to shave off those crowns, at least for the 2u.

I’m not sure that’s right, is it? I’ve used GMK Laser and Dracula on a Novatouch and have never had to modify anything. Granted, one could say it’s necessary to remove the contact between rib and collar, but I’ve never heard anyone talk about this before and it certainly works without doing so.

recall how the Novatouch comes with O-rings included as stock,

I always hated the use of those o-rings on MX boards, so I think I always blindly threw those out as soon as I saw them. This would explain why they’re included, assuming the rings are thicker than the collar is tall.

Work as in doesn’t sound like shit. Functionally it will be fine without any modifications.

Huh, TIL thanks @norbauer! Now seeing this makes me wonder if the dome completely collapsing like that on Novatouchs has any adverse effects to the domes? Also makes me wonder if there is any quirks like that with Leopold Topre boards & using aftermarket MX sliders in any Topre boards. I’d imagine not with Leopold boards as they use pretty much everything the same as authentic Topre other than the keycap profile. However I bet this is an issues with aftermarket & NIZ sliders. I’m gonna go out on a limb & say the domes most likely can handle being completely collapsed as Novatouchs have been around for a good while & I’m sure we’d have people with issues if they couldn’t hold up to that. Although definitely good info as now we can start messing around trying to get the proper Topre feel out of Novatouchs, RGB Realforces, & conversions to accept MX caps!

I’ve wondered about that too. I kind of enjoy the feel of sliders with clipped legs (using dome as bottom out), but one wonders if there is any long-term downside to using the dome for bottom-out as the original Topre patent suggests. (Surely they added those wacky legs for a reason, since there are other ways to achieve a rotation lock.)

You mean suction against the PCB keeping the dome from popping back up? I feel like the air channels plus the coil do that perfectly adequately. (In my own dome CAD models, I amuse myself in an oddly puerile way by terming these the “anti-fart channels.”) Without the coil, the suction can definitely occur but not with it—at least not in a way that I can force, even when trying.

No, I’m thinking more along the lines of coil bind where there’s contact instead of nesting. I suspect tolerances are pretty tight, but if the alignment of the spring was off relative to the direction of the downward motion of the slider I think the potential would be there.

I frankly hadn’t even considered the suction aspect, but now that does explain those channels.

Guess its time to put some dcs caps on the ol norbatouch.

and dcx as well, be curious if it has any sound/interference on NT sliders

Thanks for the informative post Norbauer. To expand on this, I have a question.

We now know the bottom out on Topre sliders is caused by the slider legs touching the rubber and not by the key top or slider making contact with the mounting plate. Does this mean the plastic mounting plate on a HHKB does not give a softer bottoming out feel as compared to a Realforce unless the typist bottoms out really hard?

I think the soft bottom out on the HHKB comes from overall plate flex and material acoustic properties, not from contact at the keycap per se. (At least with Topre keycaps there should be no such contact.)

I’m about to build my HG GoFC Edition this weekend and have a set of Novatouch sliders, but when doing some initial testing I noticed GMK keycaps bottened out on the keycap ribs which lead me todo some research and found this thread confirming it

I have a Realforce RGB in a Norbaforce GoFC Edition here too with GMK keycaps and that does not bottom out like that so something must be different.

I just built up a GOCF Heavy Grail with a PC plate, using Des MX sliders, and ran into the same issue with a couple GMK/Cherry Profile keycap sets I’d tried, where the inner support ribs would impact the top of the integrated slider housing when fully depressed. I swapped to MT3 keycaps and the problem went away, so I decided to call it good enough.