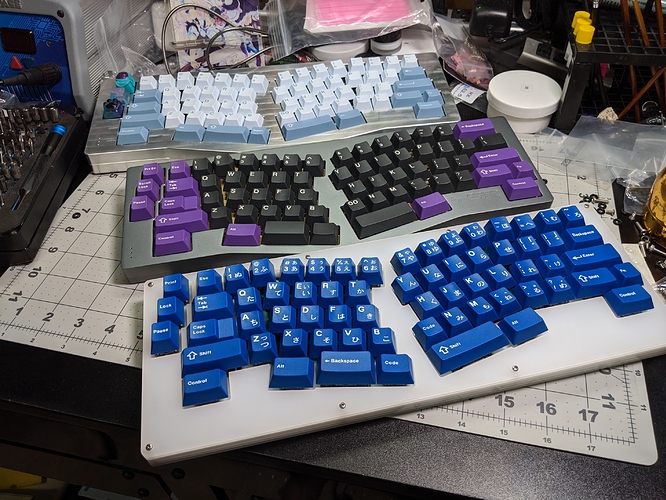 My OSA, Alice, and Lubrigante

Yup I really love this layout. How about you?

I’m very intrigued by this layout but I just don’t like how it forces the alt keys out of alignment with the bottom row and shoves the 2 and - keys out of line with the top row. Probably something I could get over if I ever got my hands on an alice layout kb. I guess for those who do use this layout - what would you change to it?

I’m really enjoying my Lubrigante. Using it at work now. Nobody else can use my computer especially cause it has MT3 Godspeed on it and legends mean nothing!

I would love to have a fully built Alice, but I always miss the GB’s for a decent case (that keeps the curvature) or the GB is much much more than I am expecting. Such a beautiful keyboard though.

I haven’t heard of the OSA, is that one newer or is that something that I had just missed?

Either way I really love the look of all three of these boards and hopefully there will be more of these to come to light for the rest of us lol.

The OSA was a small 20 unit private group buy.

There are some other boards with this layout running now and then, I think @jaxxstatic was planning on doing one with a UHMW plastic, not sure what the status on it is though.

Alice is a keyboard with the all time worst set of compromises to ergonomics.

While the Alice splits, it fails to address the row stagger problem (either by getting rid of it like Ergodoxes or reversing it on the left hand like the Topre ergo board) and fails to introduce any significant columnular stagger.

I can forgive boards like the standard Microsoft ergo boards for this because they keep everything in place such that it could be used by someone expecting their computer to be used by several people without causing any interruption to anyone’s muscle memory. But the Alice changes enough of the thumb use to spoil any general public usability gains. What’s left is a half measure of a committment that goes far enough to make turning back difficult but not far enough to do any real good.

why are you so mad at this layout

I absolutely love the alice layout in all of it’s forms. Kicking myself for not jumping on Lubrigante when I had the chance to. Was hoping to jump on the stacked acrylic version from Switch Couture the other day but I missed that group buy too, they’re running it again in about 2 months or so according to them so hopefully I’ll get the chance to get one then.

Just download the files from Zambumon’s github and get one of the many community laser cutting services to cut it for you. Then you just need a pcb or handwire…

It’s a copypasta. Just a meme, not really mad.