Another day, another plastic blend

Just like with keycap profiles, it seems like each week brings another “new” (or at least new-to-switches) blend of plastic that purports to have all the best characteristics.

The traditional arrangement of POM stem with Nylon and/or polycarbonate housing has been the standard since the early 80s, but in the past two or three years, the switch scene has enjoyed lots of experimentation when it comes to materials.

Early experiments included the all-POM NK Creams, and the introduction of UHMWPE to the housings of Tangerines. Not much long after that, folks started experimenting with UHMWPE for stems, and a few seemingly short months later, more blends containing the plastic started to appear.

More recently a few of these blends have gained some popularity, and it seems like most manufacturers have at least one UHMWPE or UHMWPE-inspired blend, if not a few. (Tecsee has three, maybe four?) At this point it seems like a new (or at least new-to-switches) plastic shows up on a regular basis - and on that note:

Today I was browsing TTC’s site, and saw they have a switch touting a new(?) plastic called “polyketone” or “POK” - this replaces POM (polyoxymethylene) in the stem: 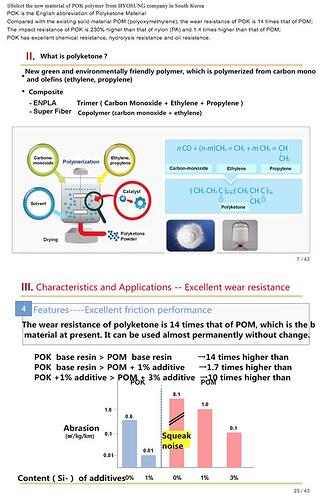 What are some of your favorite (or least favorite) “novel” plastics (or other materials) for switches or other keyboard components? (POM plates and caps, terrazzo cases, etc.) This looks to be a fairly standard Tecsee linear, just with a re-shuffling of plastic blends including two of their proprietary ones: Looks like TTC is making a Nylon-housing switch that’s more or less a tribute to the classic MX Black, and it features a proprietary plastic blend they’re calling P1. I’m assuming it’s got some umwipe in it because it seems like most of those blends do - but who knows.

As is usually the case with “new” plastics in switches, it probably won’t make a huge difference, but may offer nuanced distinction from TTCs own other linears in terms of sound.

Thanks for the info on this. Am intrigued. And as a former owner of hamsters, I can confirm they got the artwork right at least!