Anyone here currently using a prebuilt or custom made 75%? Let’s see them!

I’m considering building a custom 75% keyboard and would love some inspiration/ would love to see some of yours ! 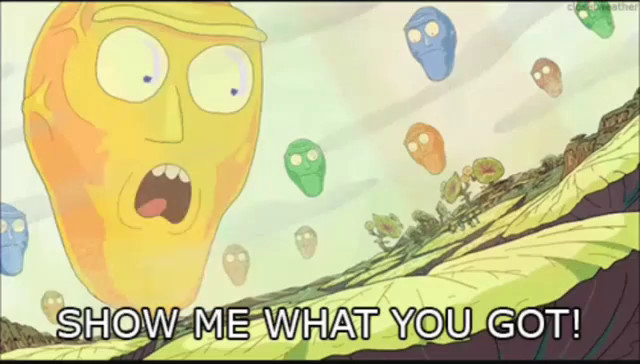 I read the IDOBAO v2 is pretty sweet. It’s an interesting exploded 75% layout, similar to the KBDFans Bella in that regards. Decent choice IMO if a crowded F-row is a deal breaker.

I have a kbd75 but tend to not use it very much, but I have a Bella coming once that finally ships, and I believe that those are still in stock from some canceled orders.

The only 75% I have is a Drevo Gramr. It’s pretty much stock with Gateron Browns with sort of lubed stabilizers. You can check out the LCK75. It’ll be open sourced after the first GB ships (I think?) I also read on the LCK Discord that there will be a round 2, but not sure if true. 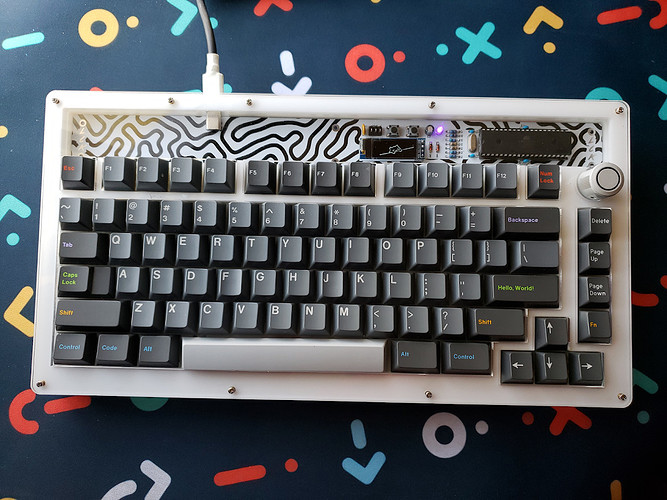 This is all I got until the HMKB 75 ships. 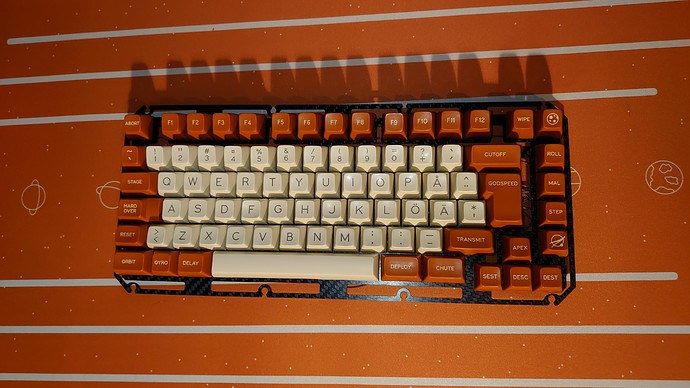 This is all I got until the HMKB 75 ships.

hopefully that’s not too long…

Great! What is it?

It’s a custom made CF-plate for the HMKB 75.
I have put in FFF-switches and hand wired it to a ProMicro. So now I’m just waiting for the case to be made and shipped. 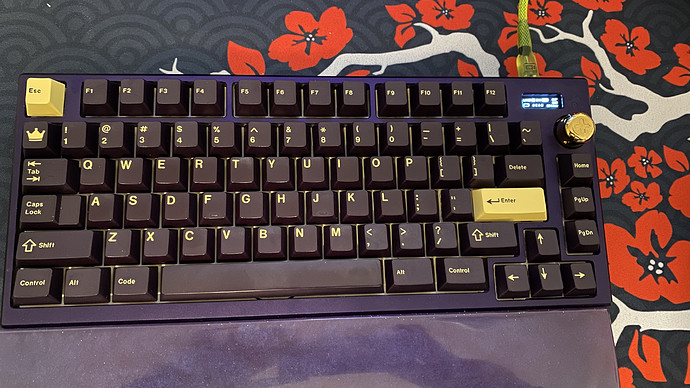 I’ve been getting purpler and purpler as we move along.

I really like 75s fwiw. I’m more than happy to use F keys via a layer (on a 60 or a 65) but aesthetically I like the look of having 'em up there. Also feels a little better not to leave almost the entire keycap kit empty when you use a smaller board 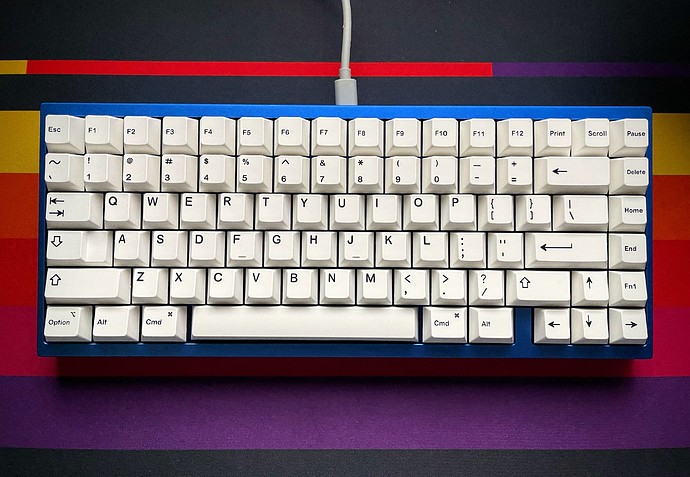 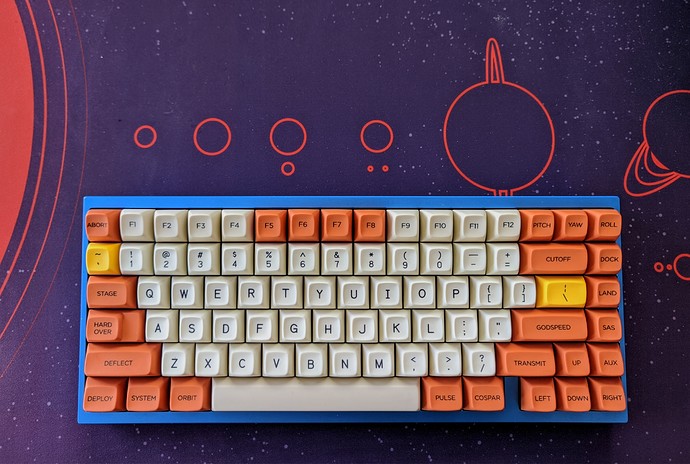 I just now noticed that this has tiny OLED screen. Super Neat!

I built a KBDFANS75V2 and love it since the first day! 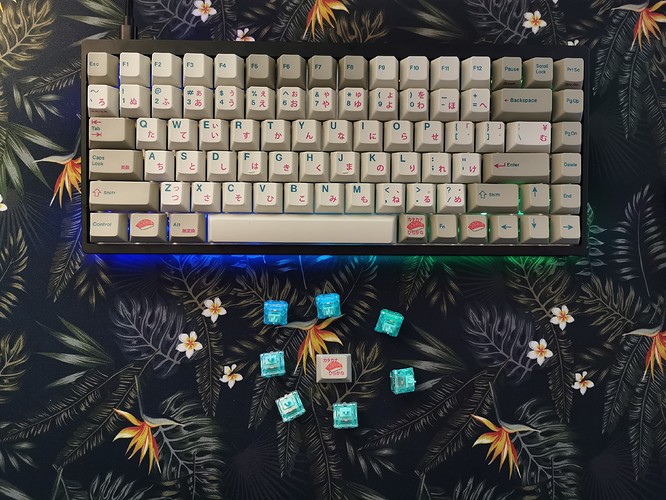 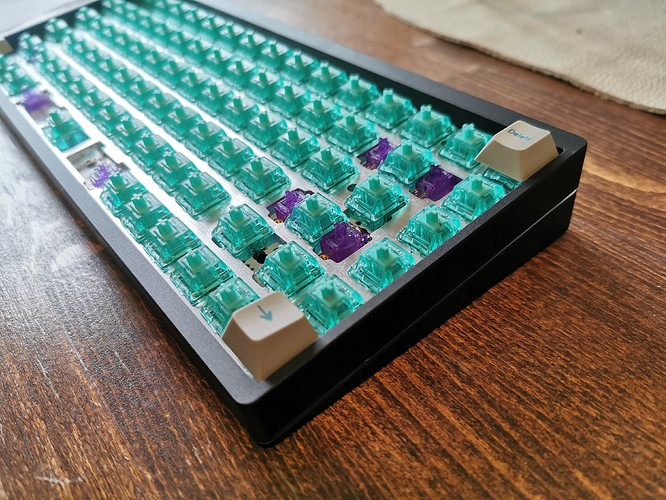 I got myself a pink variant of the IDOBAO v2, but haven’t built it yet. I do love this layout: 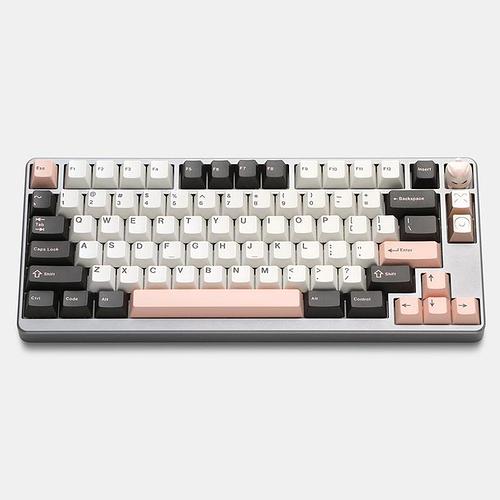 I’d say it’s the perfect crossover between a Leopold FC660M and FC980M.
The reason I think this layout is superior:

Just take a look at how you don’t want your 75% to look like (taken from https://mechanicalkeyboards.com):

What’s wrong with the race 3? IMO out of the box it is one of the best prebuilts you can get, the styling is classic and has been around forever. The colored keys are also optional. The top row layout is a little wonky, but the keycaps it comes with are good enough (PBT DSA) that you probably never need to replace them.

the esc key size thats what.

I thought about getting that board but you can not get any other caps for it and its bullshit.

Yeah, for an enthusiast the layout is definitely not ideal and hard to work with, but I think that for someone who is less interested in customization this one really is a slam dunk, it’s my go to recommendation for people who will probably never upgrade anything, I think I have three or four friends that have and love them.

Too crowded at the top row and wonky esc/del keys as you said. Also I dont like how the arrow keys are shut in with keys all around them, and also without an offset.

But ymmv. This is all subjective to a degree.

Also I dont like how the arrow keys are shut in with keys all around them, and also without an offset.

That’s pretty standard for a 75% though