I personally like it best when the mods “frame” the alphas, being the outermost keys on the left and right side of the keyboard.

Out of curiousity I am considering building a board with a 1.25u enter key.

Does someone use a board on a regular basis with a 1.25u enter key?

If so, what do you personally think of it? Like it? Why yes or why not?

Enter is already the right most key on a 60%

It will move the enter 1u over the right. If you have long pinkies that could be fine.

I use 1.25 enter on my UT47.2 but it doesn’t have punctuation so it is closer, despite being smaller.

It’s not exactly the same situation, but I was able to adapt to the 1U enter (and other mods) on my Planck ortho without too much difficulty.

Enter is already the right most key on a 60%

I personally like it best when the mods “frame” the alphas, being the outermost keys on the left and right side of the keyboard.

… I should have explained WHY I mentioned it

So I’ll explain it (hopefully) a little better now:

My first steps into custom keyboards were with a 75%.
I realised after a while that I don’t like keys directly to the right of enter, backspace, etc…
It’s perfectly fine with a gap like on tkl-boards though.

That’s why I experiment with 60% boards right now, and they of course have the enter key as the right most key.

But, since I use a Norwegian layout with all those extra keys, a 60%-board is pretty crammed, and compromises have to be made.

And that’s WHY I was wondering how a 1.25u enter key would be like.
It would allow for one more 1u-key

But, since I use a Norwegian layout with all those extra keys, a 60%-board is pretty crammed, and compromises have to be made.

This is a little off topic, but since I also use a Norwegian ANSI-style layout, here’s my recommendation (you can ignore the HHKB bottom row and Ctrl placement): 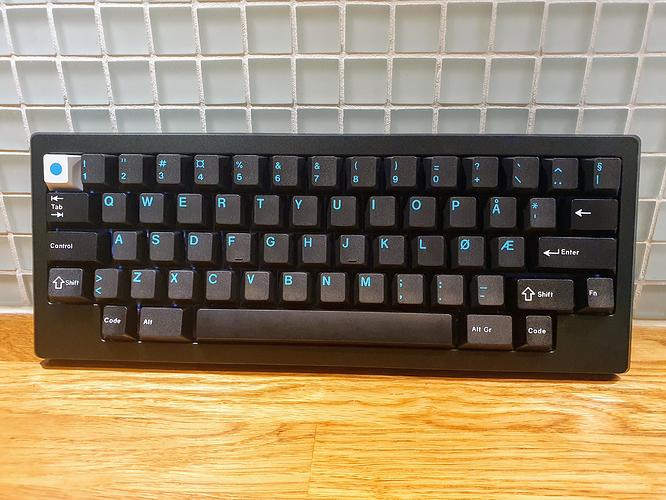 3958×2969 1.58 MB
In other words, I use a 1.5u Backspace above Enter (known as “split backspace” since the usual Backspace key on the top row is split into two 2u keys) instead of a 1.25u Enter, and I’ve swapped the (Norwegian) '* and ¨^ keys so '* remains close to Enter. That sadly means that the profile of those two keys are wrong though.

That said, I’ve also created the Norwerty layout for standard ANSI (which I don’t use myself anymore) in case that’s something you’d be interested in trying.

Haven’t tried a 1.25u Enter, that could be interesting too, but I prefer the sizes of the modifier keys to be somewhat symmetrical on the left and the right side of the board (the ISO split left Shift is an unfortunate problem for me, and I currently have a BoW <> key on there so it matches the mods). That’s actually one reason I prefer split Backspace; the | key on ANSI is IMO an abomination.

I actually use a HHKB-inspired Norwegian ANSI layout with split backspace too.
Slightly different to your layout. 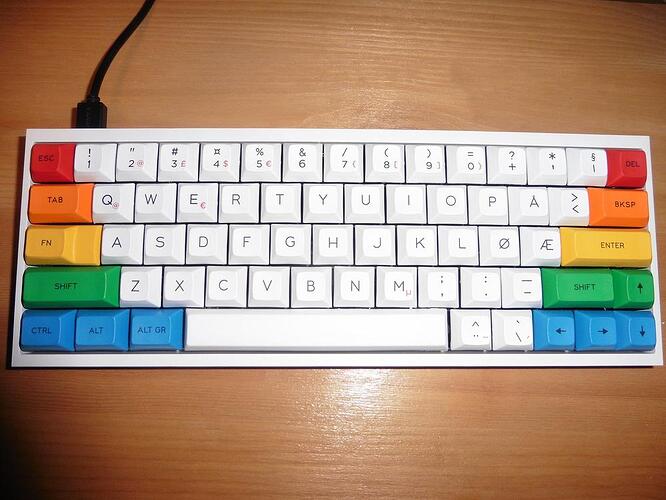 It’s a big improvement on my previous build, but I’m still not entirely happy.

That’s actually one reason I prefer split Backspace; the | key on ANSI is IMO an abomination.

That’s exactly the reason why I don’t like the traditional ANSI.
One single alpha key with 1.5u. Thankfully it’s not a letter, that would be even worse

That being said I don’t like the traditional ISO either, mainly for the 1.25 left shift, and partly for the enter key (but only partly, only in builds that try to achieve some kind of colour-gradient symetry).

So I ended up with my current HHKB-inspired ANSI.

The reason why I consider a 1.25 enter is that I would like to incorporate a dedicated compose-key as well.

Ortho people somehow make do with all or mostly 1U keys so I’ve been thinking about breaking up all those wide modifiers before even getting to the bottom row. To start with, there’s the ANSI HHKB-style quality of life improvements of splitting backspace and right shift. This doesn’t mean the underlying keymap has to be HHKB, and the split right shift could go the other way instead of how the HHKB has it. There’s also the ISO split left shift. I do like the big vertical ISO enter of JIS, but if I was approaching this from the JIS layout first of all I’d split that enter key which would give the same result keycap-wise as splitting the enter of HHKB ANSI. HHKB JIS has that nice cluster of arrow keys for an English digital native but maybe too many other keys on a 60%. Aesthetically speaking it’s hard to beat the near symmetry of HHKB ANSI.

European Apple MacBook & Magic Keyboard users somehow survive with <1u of enter key on the home row, and only 1u on the qwerty row.

This abominable enter layout has persisted for decades, on a laptop which seems to be overwhelmingly popular with developers (who use enter more than ordinary users), so I guess you’ll find 1.25u is completely adequate.