I’ve been typing on my GMK 9009 R3 set, and I’ve noticed that it has a really creamy feel - a surface texture that’s milky smooth, but leathery enough to provide some finger grip.

This was also the case with GMK Honeywell R1.

However, in 2019, I bought an extra from Drop’s Oblivion R2 [Oblivion Mono], and I noticed that the surface texture was much more ‘flat.’ It felt ‘deader’ and a lot like worn-in GMK, which I have experienced at meetups.

This got me wondering - all sets were brand new when I bought them. So does the production process lead to different surface texture results for different sets?

I’ve purchased GMK spacebars from Originative and those had almost zero texture. They’re totally smooth and almost glossy. My other spacebars from GMK sets have that rougher texture like the rest of their keys. I’ve often wondered if it would be possible to get a GMK set with that kind of ultra-smooth texture without needing to shine them first.

I have also noticed that older GMK sets sit lower than new GMK sets. If you mix and match say Blumen from 2015 with a modern set, the keys sit like a half mm lower.

I think GMK updated their molds and that is why this is the case, because the newer sets also appear to be a hair thicker than sets from the old days as well.

The new molds could definitely explain some things.

Before the retool, maybe the use of different mold sets simultaneously created things like the Metaverse inconsistency.

For why the Oblivion Mono felt glassier and less textured than my other sets, maybe the plastic involved has something to do with it. Honeywell and 9009 used classic GMK stock colours, whereas Oblivion Mono may have used something much newer and different.

Also, I wonder if sets run through Drop might have different textures than Originative or the smaller distributors.

Just popped open a new set of GMK Hennessy and the G and M keys are odd.

G is fat and goofy looking. M is crooked, which I thought wouldn’t happen with double shot.

I wonder if speed affects the production run. If you crank out sets at higher speed you make more sets per hour, but the plastic has less time to cool and shrink properly. 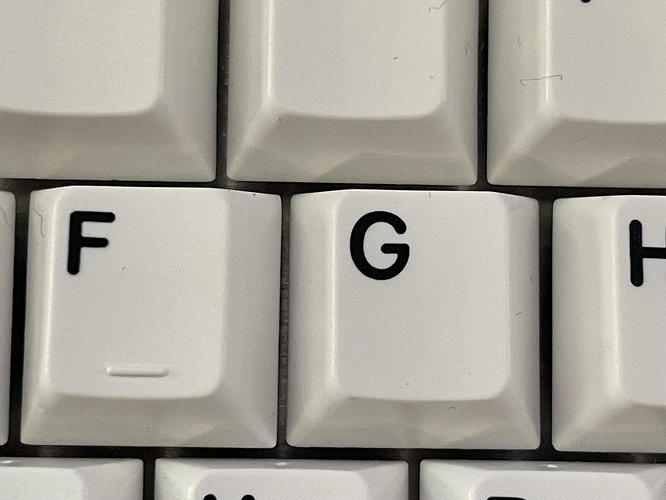 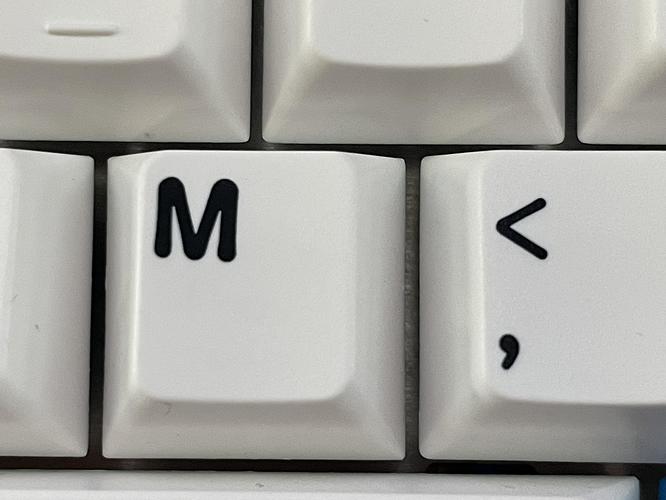 GMK took some heat for their legends, recently.

There was a big thread on Geekhack about 9009 R3, for example. A lot of it concerned the spacebars, but there was also concern about inconsistency in the legends. Thin / fat was one issue. But also, there was stuff like Scro ll Lock, spacing and crookedness issues.

Some people pointed out that GMK keycaps have always had ideosyncracies like that. Although others say they are getting worse as the tooling wears out. It was even suggested that renders for GMK sets be updated to include the crooked legends and such.

I was mostly happy with GMK 9009 R3. The colours are better in-person than photos. It really is just a smidgen above copies like ePBT 9009. Surface texture was excellent, and they are thocky.

The spacebars were a bit f#$%ed at first, but Omnitype corrected that. Now, mine are as straight as CRP. [Only thing that bothers me is the blurry legend text on the Esc key, which looks a lot like an ePBT dye-sub.]

I wonder if speed affects the production run.

Adjacently necro-topical; I’ve wondered this about MT3. My copy of Susuwatari R1 is consistent enough that nothing sticks out to me - and I can’t help but notice that stuff. I’m not gonna use the p word, but it exudes high-quality.

Subsequent sets, though, are less consistent - at least BoW and WoB, which I’ve seen many copies of personally through my own builds and builds for others.

Just the kind of stuff pictured above; a weirdly fat legend here, a skinny bit on one there. Stuff like BACKSPACE or PGUP PGDN being the easiest to spot.

More subtle stuff like two boxes of WoB with different blacks. (I didn’t notice until I tried to mix them - wait a minute this black is charcoal and that one is piano…)

In only one case so far, a stem wasn’t fully-molded; basically all the other issues were with the legends and not structural as far as I’m aware. Maybe(?) a minor twist but nothing like the one above.

To Drop’s credit they replaced or refunded every example I felt I couldn’t hand to a customer, and they paid shipping. Sometimes like three times in a row until it was right - points to them for that. I don’t expect that from all the vendors I have sets on order from. Ha, I don’t necessarily even expect one of them to arrive at all; a bemused purchase I’ll explain when I know the results.

Coming back around to the main topic - I’d seen this with MT3 months ago, but didn’t realize this sort of thing was an issue with some GMK sets as well. Blissfully unaware, you might say. It will be interesting to see how upcoming and in-production sets fare in general, as there are quite a lot of them.

The legends on the Marvel sets also look sus. In addition to production speed I was also wondering if cap makers aren’t using cheaper ABS, or ABS from new suppliers, because of the world wide shortage. Plastic from a different/new supplier might have slightly different properties.

I’m kicking myself for not getting in on the early R1 Susuwatari group buy.

Not because I wanted the set, since the colours aren’t for me, but because the set basically ended up being free thanks to Drop credits from the incessant delays. I figured something like that would happen, so I could have gotten a free MT3 set. [and it mixes well with WoB and the other sets], even dev/tty].

And obviously the designer sat on it until it got as close to ‘right’ as possible, so yes, the quality was good.

My BoW MT3 seems okay, but I haven’t gone over it with a fine-toothed comb. Has very good acoustics. Likes heavy tactiles. Nothing in there yet that would make me replace a set, fortunately.

I bought the first BoW / WoB sets that became available. Who knows what the plastic is like now. I’d buy some of those Marvel sets if they weren’t Marvel! Interesting colours.

I will say even the sets with derpy legends still had great-feeling keys.

Off topic, but GMK spacebars are getting really bad. My MoDo Light set came in recently and both the 6.25 and 7u bars are bowed more than any other set that I’ve had in 5 years. They are as bad as some older ePBT sets. I’m actually curious of anyone else was in that GB and how their bars turned out.

On topic, the surface texture for my GMK sets do seem to vary. The last round of Honeywell is exceptionally silky and smooth (feels great) – Nautilus R2 was fairly smooth as well. The last few sets off of Drop seem to have a much more grainy texture.

I’ve noticed that the Drop sets seem to have an inferior texture. Wonder if that’s part of the speed and cost agreement they have with GMK.

I sold Honeywell R2, maybe should have held on to it. But I already have Honeywell R1 and am not using it right now. R1 had excellent surface texture too.

I’m so glad that Omnikey replaced my 9009 R3 spacebars, I’ve stopped taking part in GMK group buys because I don’t know if that service will be available in all cases.

Welp. However this pans-out, I smell a video topic.

There’s already been a video about GMK straightness [sort of].

Some months ago, maybe around the beginning of the year, someone posted a video comparing the vintage [pre-2019] GMK spacebars to the newer ones.

The older GMK spacebars had a faster return rate, for one. They would bottom-out and return more quickly than the newer ones, suggesting less warp.

The originator took down the video practically on the same day it was posted, intentionally, as they didn’t want to start arguments.

The originator took down the video practically on the same day it was posted, intentionally, as they didn’t want to start arguments.

This is a good reminder; if I approach this topic , I’ll do it with care, and mostly to document.

I do think this is a great excuse to break out some cheap but functional macro gear I bought years ago. I definitely don’t want to start arguments, but I do want consumers of keeb stuff to be reasonably informed, especially about expensive premium products that largely sell on reputation and brand awareness.

For clarity; if I were to approach a video about keycap quality, it would be focused on the broader topic and include as many examples from various manufacturers as I could. All the better if I can find contextual information about why [ x thing ] looks the way it does or has changed over time in the way it has.

As much as I enjoy speculating I think I’ll set a hard rule to avoid that or at very least very clearly label for the topic; I’m sure I’ll have to make cuts for that one.

I don’t really see the issue with stirring shit up, lol. In all reality it is a good thing as the consumer is not only being informed, but on a platform that can encourage a group bargaining of sorts as long as the displeasure with the product is directed toward the manufacturer. Plus, if you focus on facts and not opinion, you may change the mind of those who have no basis for their bias/belief. Sure people can argue that they are “within spec” or just don’t care, but they can’t argue with the degree to which the modern spacebars are warped nor how they compare to older sets. I know you don’t want to intentionally sow discord, but conflict is the catalyst of change so don’t feel too bad.

conflict is the catalyst

I have to agree; the idea is to apply pressure, just not through anything aside from documentation and maybe light commentary. It’s ok with me if a lot of people see it, look at their own sets and notice some things, and write an email to the mfr - I’d just prefer any brigading or pseudo-righteous indignation be involved - just informed customer positions.

Pressure from customers wanting a better experience has improved Drop’s customer service from what it used to be - and if need be, I’d hope the same would be true for their products and for GMK. And the end of the day, that would be the point of a keycap quality video for me.