Be careful with your zeal stabilizers 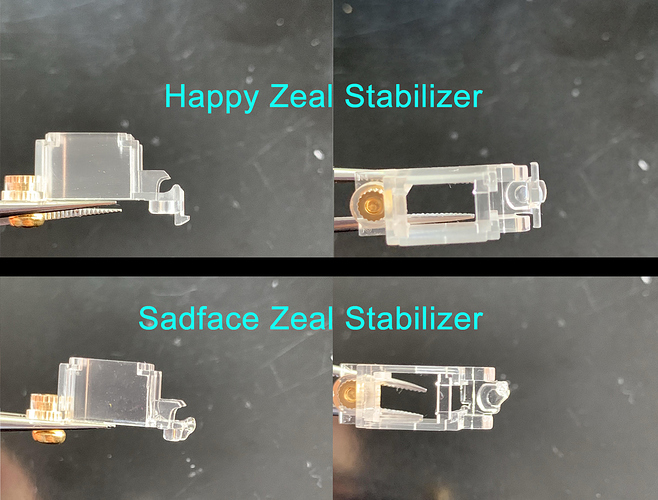 So, this is a thing. It’s probably a very small thing but I was unlucky enough to have 3 stabilizers that were defective in my last batch I ordered from zeal. I have spoken with another community member who also had the same defect.

You would think after building dozens of keyboards I would have noticed it in advance, but I managed to build a keyboard a few weeks ago with one of these on the space bar. DOH. The wire pops out, and will not stay in b/c it lacks the proper supports to lock it into place on the bottom. Guess it’s time to get the desoldering iron out.

I wouldn’t have thought to bring it up except I saw @TaehaTypes build the Kepler and have a stabilizer pop out after the build. I wondered if he did the same thing I did.

Again, maybe a small fluke, but just adding it here in case others find similar.

That is the worst feeling when you see it pop off on a fully soldered board. Had that happen with my first generation Zeal stabs. The revised ones I have have been good though.

I had one of the same in my latest build. Good thing I have lots of extra 2u’s since I’m not making full size boards but lately I’m seeing this pop up in the community. I think this is the 4th mention of this that I’ve seen now this week.

I’ve had issues with regular Cherry PCB mount stabilizers wires popping out before. I was usually able to get it popped back in place without desoldering, but once it happened it continued to happen. Replacement is the best option when it starts to happen unfortunately.

I’ve always been able to get them popped back in, but in this case the support is missing… so they don’t actually every fully pop in from the start. Again, you think I would notice, but alas…

I’ve had wire popping out of GMK as well as ePBT stabs, let alone no-name stabs.

My solution was to add a little epoxy putty wall next the wire to prevent wire pop-out. It can be tricky but the wall can be added without taking the board apart. To prevent putty from touching the wire, place a sheet of paper on the wire-side of the putty wall then push the wall tight against the wire and let it dry.

I hear you, but you would’ve had to really look close at them to notice from what I can see in your pics so I bet I would’ve went ahead with using them also. I think something similar was up with the original stabs I built my acrylic Clueboard with, well at least the 2u ones that were originally on it. I could always get them back in place, but they never would stay there. Finally I just replaced them with GMK screw in stabs when I swapped the switches from MX Whites to retooled MX blacks.

Bruh, freaking jinxed myself. Took off my spacebar. Popped my cherry stabilizer. This is why I don’t say things like “I haven’t had any problems since…” Mistakes were made. Mistakes were freaking made.

Yup. Stab wire tend to pop while pulling the keycap tad too hard of skewed. Looking at the stab design, pulling action should push the wire down. Still don’t quite understand how it happens.

Screw-ins help a bit but doesn’t quite stop the wire from popping. Thankfully, it’s doesn’t happen all too often and hot-swappable board makes it less painful to restore the wire.