Did anybody try to mod their ErgoDox EZ with a custom LED array?

Did anybody try to add a custom led array to a regular ErgoDox EZ? It seems that regular ErgoDox EZ PCBs are the same as ErgoDox EZ shine, so one can solder a 4pin JST wire connector onto the halves and connect a custom LED PCB to get a compatible - or identical effect. 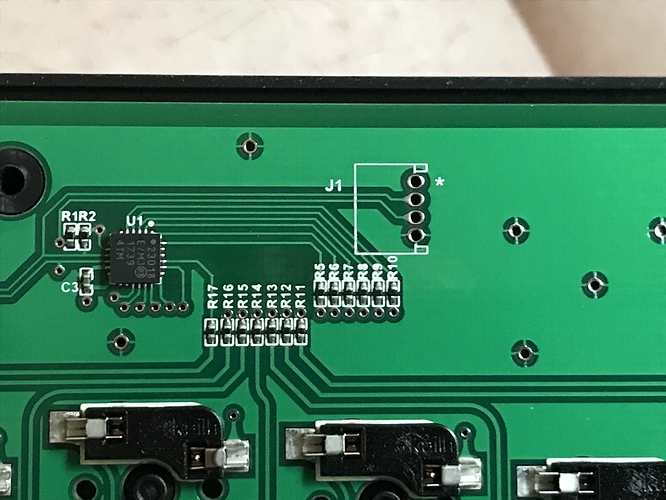 I think that’s actually an i2c header. On my shine, there is a header soldered there, and connected to the rgb strip, actually.

Thank you do much! I’ll check with my shine but this looks like it reduces the complexity a lot to designing a matching PCB!!

If you have more questions about this, hit up their support. Erez is pretty awesome, and I’ve had and seen nothing but good experiences with them!

I completly agree. I’ve pinged Erez and he is indeed super helpful and awesome!

So I ordered my first PCB for the right side, as it seemed way easier to get started.

PCB will arive mid September and the LEDs early October - will update this thread once I’ve soldered & tested the first one.

I’ve got the left PCB nearly done in Eagle, need to replace some of the libraries for matching SMD components, and create a custom one for one of the chips. This is on hold until the right side works. 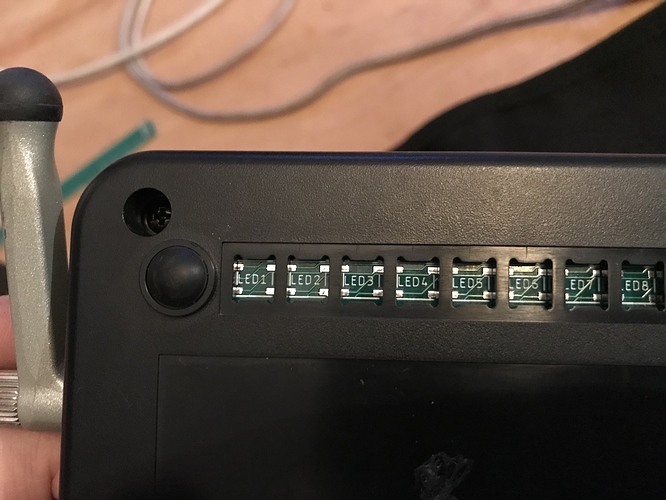 Right half fits ok, waiting on the LEDs to arrive to make further progress.

Ooh, this looks interesting. Excited to see how it’ll turn out!

I got the LEDs today - soldering was quite easy: 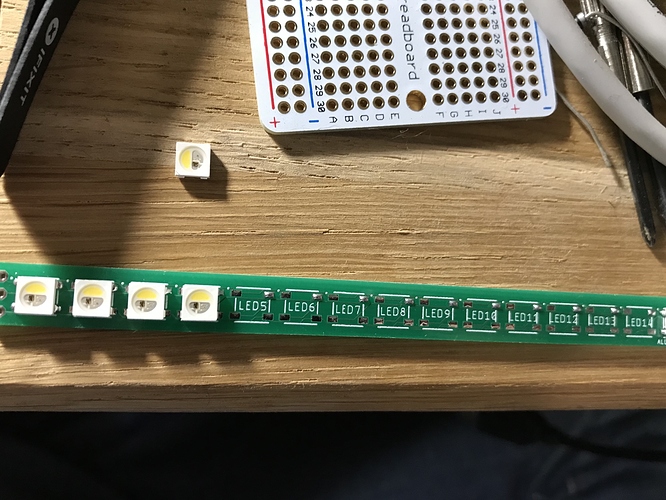 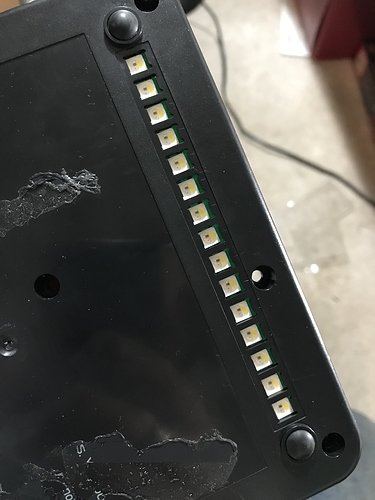 the fit is good; the small soldering bubbles prevent the LEDs from fitting 100% into the cut-out area, but that shouldn’t be an issue. Now I’m waiting for the micro JST 2.0 3-pin connectors to attach it to the keyboard circuits…

In my confusion I bought wrong JST headers (it’s 1.5mm, I bought 2mm), so I just went ahead and wired it myself: 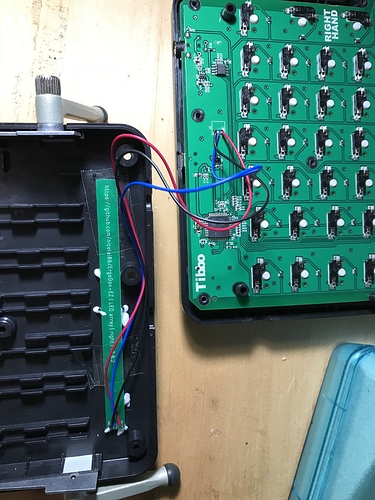 Using the voltometer I checked the right polarity, and voila: the right half works perfectly; even if the left half has no LED strip attached dimming and animations work fine: 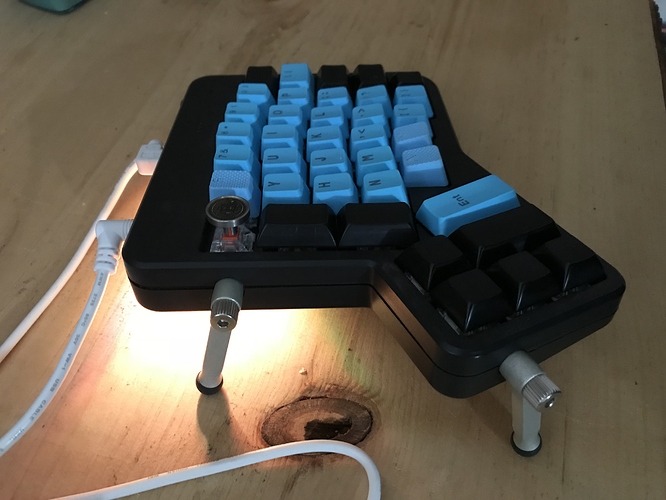 I’ll omit the video showing the animation and color changing; it’s too huge for an upload.

Next up, left side.

learning expenses:
1x 10 USD for the 1st PCB prototype (5 pc) - unfortunately I was 0.2mm off on both measurements, so it did not fit
1x 1.95 CAD for wrong JST headers

so, not too expensive; also I learned a little why the PCB in the ErgoDox EZ is what it is which was great fun:

the ErgoDox EZ strip has 3 pads (vcc, data, gnd) on the left and 3 pads on the right side - turns out this is super useful! If you solder the LEDs rotated by 180 deg. - which I did at first - you can rescue the PCB by using the other side, as all pins still match. I had to throw away the entire row as I was unable to get the LEDs off cleanly. So that’s going to go into rev 0.1 I guess

So, I finished the left PCB - however I’m using an atmega168 instead of the FPGA - it’s working, YAY. 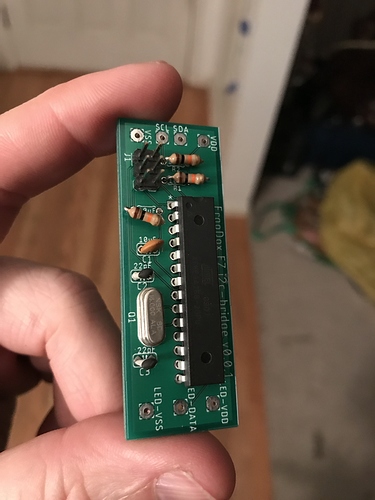 At first I was using PB1 for the LEDs, but that didn’t work for a yet unknown reason. So I instead soldered the led data pin to PB2, and that works fine.

Unfortunately the non-SMD version doesn’t fit into the tight enclosure of the ErgoDox EZ, so I’ll need to do a new revision which probably will be all SMD to ensure a proper fit. 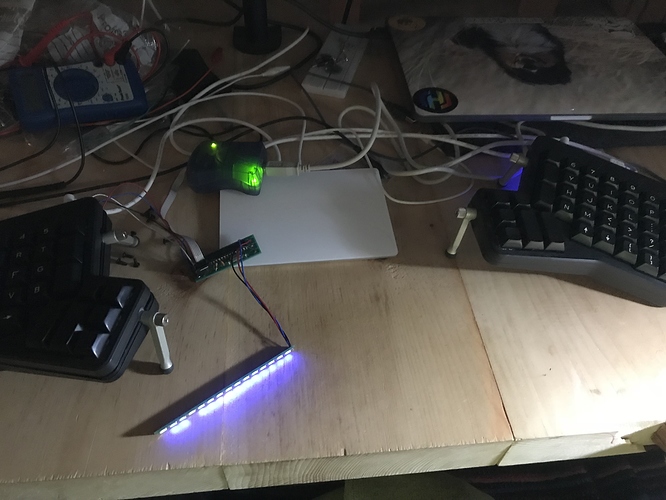 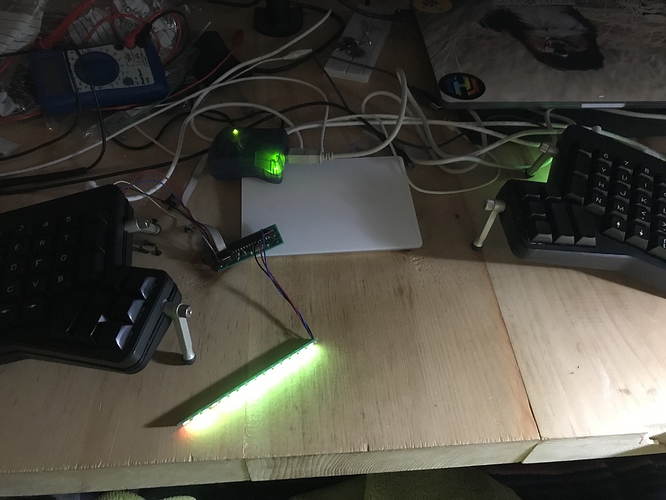 Once I’m done with the cleanup (code and PCB) it’ll all end up on Github.

Now off to design an updated PCB… yay

Not too bad for learning and actual expenses too.

Do you have a picutre of how you’ll mount that left-PCB?

I’ll try fitting it into the case again today - I need to remove the programming header for that. I’ll let you know how it worked soon

@Manofinterests right now the fit is bad: I can’t close the ErgoDox EZ case on the left side entirely: 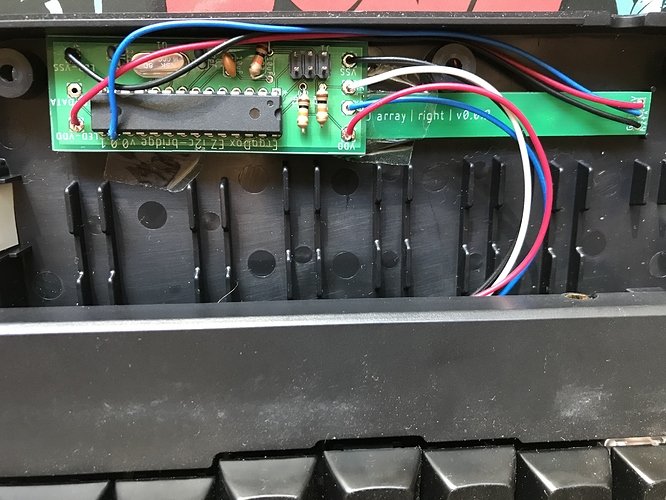 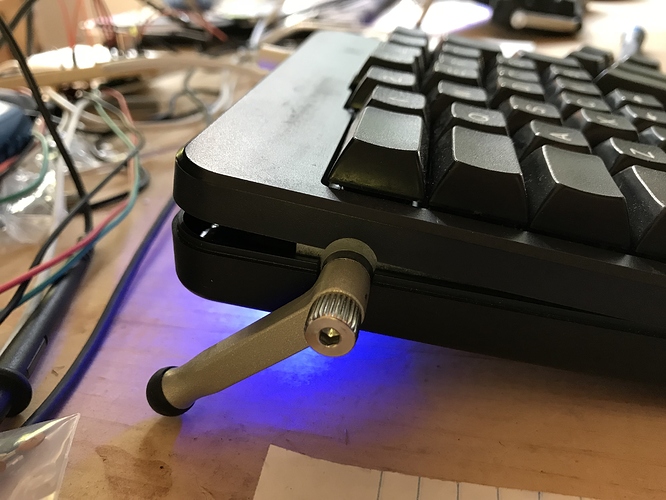 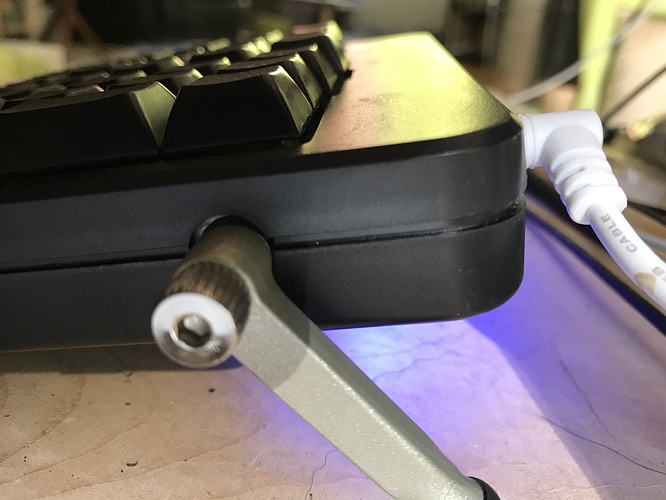 The issue is that the ErgoDox PCB in the center of the left half, and the regular ICs are way too thick.

I’ve redone the left PCB entirely in SMD, which should resolve the issue. Now I just need to wait for the PCB and the SMD components to arrive…

The SMD PCB is about half as wide: 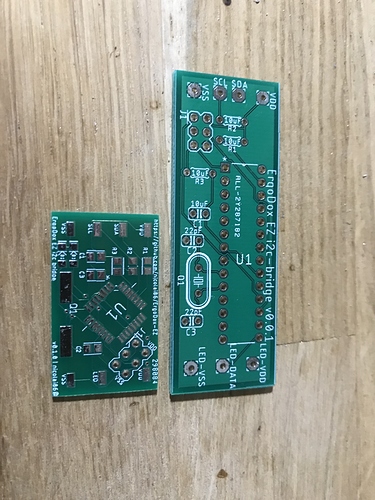 It fits perfectly into the case: 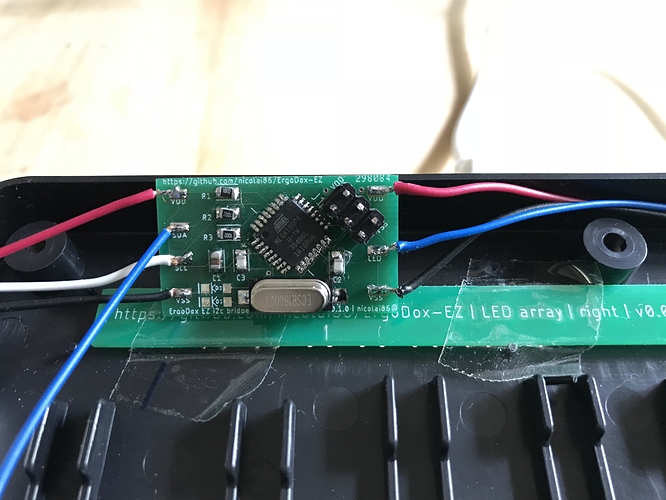 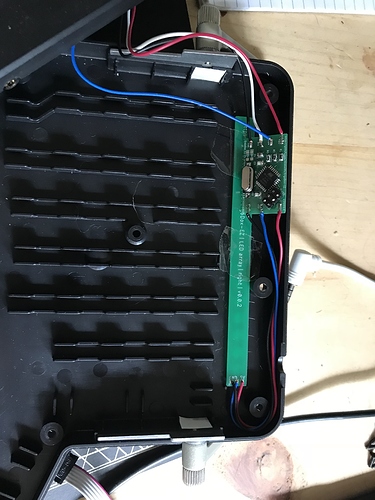 The entire source code as well as all gerber/ eagle files are hosted on Github.

So, successful mod - costs for SMD parts are as follows:

If anybody wants to build the same mod or follow along - I still have 2 LED strip PCBs flying around as well as a number of I2C SMD PCBs. Ping me and I’m happy to ship them in exchange for shipping fees + component price according to mouser.ca

I’m actually thinking about trying to mod myself an ErgoDox Glow now, but 50 additional LEDs below the main keys… probably a power issue.

Well, the Glow uses dual IS31FL3731 chips. One on each side. And charlieplexes the connections to support the RGB LEDs.

As for how it’s attached, … I’ll take pictures once mine arrives.