I’ve been tinkering with a few Matias switches I had around. Results were surprisingly pleasant enough to start this thread to log my journey in the world of ALPS switches.

I am terrible at selling nor finding used anything so readily available Matias switches is where I am going to start. First thing that I liked about ALPS switches is how easily they can be modified. Some findings from modifying Matias switches follows.

Of all the combos from both switches, I liked the tactile switch made from QC the most. It sounded bassy after lubing with 205g0 and made much less noise than tactile made from MC. The later definitely had stronger tactility but I think that extra energy from released clicker leaf was causing more noise.

If you’re interested in linear switches, checkout the companion thread Easing into Linear

I’ve used Apple keyboards all the time back in the Fat Mac days but don’t remember enough about how SKCM Orange felt to compare against QC. 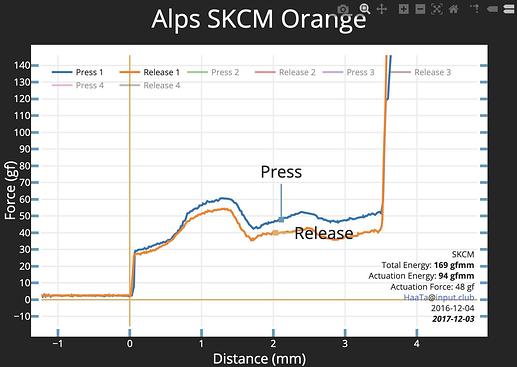 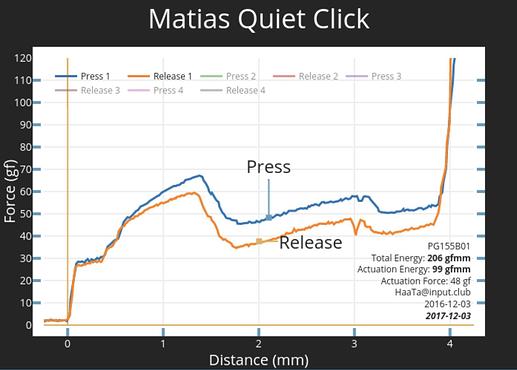 It’s encouraging to see that QC’s force graph looks similar to that of SKCM Orange. Not sure how key travel can be longer with silencing rubber though, full 4mm where SKCM Orange appears to be around 3.5mm. 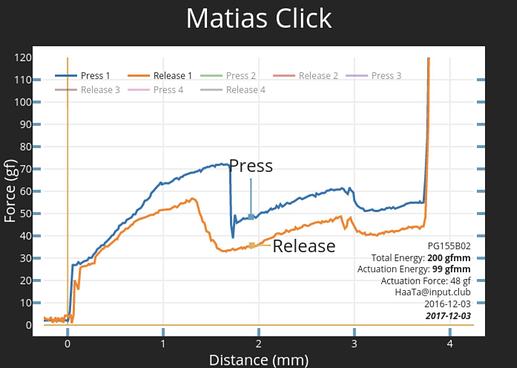 Where QC’s tactile leaf is fixed at the top, MC clicker leaf is not so gets pulled along while the key is pressed, extending the force graph line until it’s released to be slammed against the housing. That’s why it feels more tactile.

That force graph looks accurate, although good condition SKCM Orange/Salmons feel significantly smoother in use. The main difference is that QCs have trouble with wobble and binding that makes them feel sharp when pressed from one direction, and smooth from the other. On the smooth side they don’t feel that different though, too bad my V60 has them mounted going the other way.

I’ve ordered a set of QC and two sets of Matias Store. 200 switches is a lot of tinkering fodder. Meanwhile, I’m wondering what kind of jig one would need to make custom leaves for ALPS/Matias switches.

I don’t have experience with original ALPS but I have two Matias boards.
Before buying them, I got three switches (Matias Click, Matias Quiet Click and Matias Linear) just to get an initial idea what ALPS/Matias is all about. I did a test trying to find out if MC is more tactile than MQC, so I put headphones with loud music on my head and started playing with the switches without looking at them. I couldn’t tell which one was MC and which was MQC. But without the headphones, just hearing that click sound of MC made me feel that MC is more tactile. Of course these were single switches that I was trying, maybe typing on a board would made me feel a difference, I am not sure.
I ended up getting a MC and a ML board.
One thing that have all matias switches and I don’t like is the second smaller tactile bump at the bottom of the key press. For me, it makes MC and MQC feel cheap/scratchy/broken and ML feel like a Cherry MX Brown with the tactile bump at the bottom instead of being in the middle.

I have the same feeling of sharp and smooth with my recently desoldered SKCM Creams.

Good to know I’m not crazy. 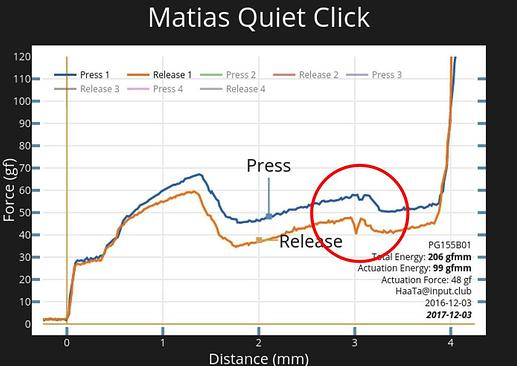 Yeah. That little glitch is not present in SKCM Orange’s force graph. I’ll have to ruin a few switches to test which part of the contact leaf is causing that.

Please post an update if you find out what is causing it. I am curious.

Took apart the switch again and removed one of the contact leaves, one with protruding arm that directly interacts with the stem. 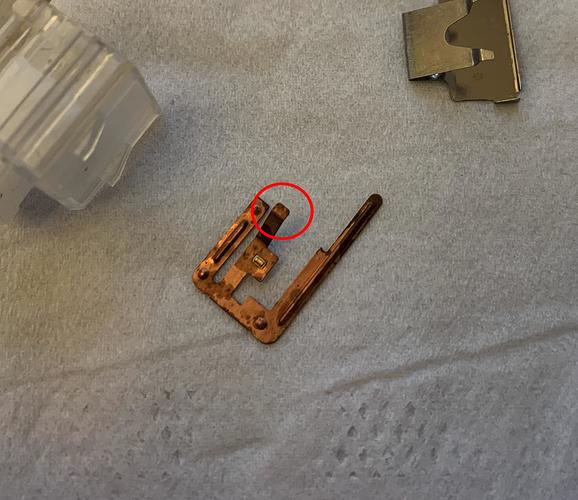 Apparently the second bump is actually just a change in the angle of the protruding arm, going from an angle to vertical, reducing resistance against the stem. That matches up with the force graph.

I just went for the first solution that came to my mind: straighten the bend. Took just a few seconds using a flat plier. Here is the result. 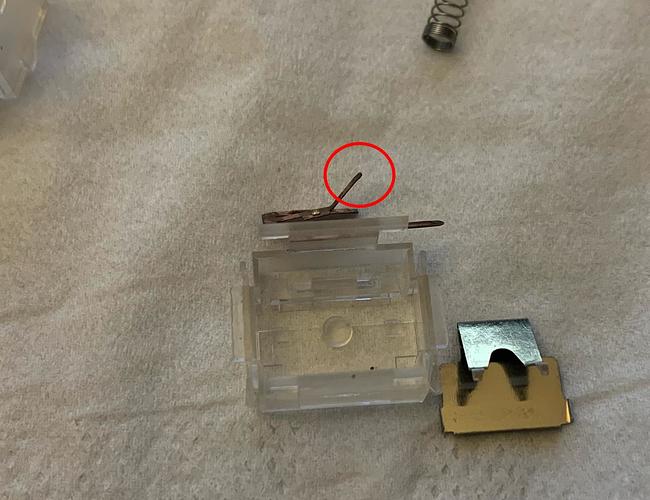 When reassembled and tested, I did not feel the second tactile bump any more. Switch operation doesn’t seem affected either. I suspect the bend was added to resolve some factory assembly issues, not for mechanical reasons.

Now, I need people who’ve actually experienced the second tactile bump to try this hack and share the result.

UPDATE: It occured to me that the bend may also have been the solution to the key chatter problem Matias was having with these switches before. If the leaf contact bounces from extra push it receives, key chatter may result. Bending limits how far leaf is pushed. Since I’m only hacking on switches and not in a board, I can’t verify this.

Wow, thanks for the detailed report on your findings! That’s very interesting. So it looks like there is a way to “fix” this “issue” but entire board would require tons of patience. Did straightening the bend looked dangerous for breaking/damaging the small arm?

Did straightening the bend looked dangerous for breaking/damaging the small arm?

Not for me. But then I rolled high DEX at birth so YMMV.

Seriously, you should try the hack on spare switches only for now.

I’ll give it a go when I find the time.

I think you have found the issue that makes the second bump so prevalent in Matias switches & simplified ALPS/ALPS clones. Although I do have a pretty deep experience base with complicated ALPS & while the second tactile bump is much, much less noticeable than with Matias & simplified ALPS/ALPS clones. SKCM/L ALPS switches do have it also. I suspect straightening out the last bend on the actuation leaf of a SKCM/L ALPS switch would have a similar result.

Unfortunately I do not think it would be worth trying as the actuation leaves for complicated ALPS are made of a thinner metal. Also they just friction fit on the switch plate assembly, so it would be very very very easy to break the switch trying too adjust them. Not to mention make them feel pretty inconsistent from one switch to another. Which could also be a problem with your mod here, but given the actuation leaf’s thicker & tougher design on Matias/simplified ALPS it shouldn’t be nearly as noticeable.

Edit: I should mention that using good typing form & not bottoming out your keystrokes pretty much negates the second tactile bump with SKCM/L ALPS IME. So as long as you can keep from bottoming out or just barely bottom out before releasing the keypress it really isn’t an issue. Can’t say if that translates to Matias/simplified ALPS switches though as they use a much different actuation leaf.

It is probably made by progressive stamping. I am not sure if that can be replicated in DIY conditions.

Also, by applying some OKS 477 on the slider may help but the switch becomes a bit smoother, the tactile event is lighter and less noticeable.

Alps realm n00b question; I wonder if it would make sense to try something along the lines of TTC’s bottom housing dampeners, but around 1mm thick so the travel ends (but not harshly) right at 3mm where that little glitch starts. Obviously that would be short and have a weird travel-to-actuation ratio, but is there any chance this wouldn’t suck?

Give it a try and share the result, mate. If we just sat around wondering, mine as well read poetry.

BTW, I’m a ALPS noob as well. Just digging in, that’s all.

So straightening the protruding arm in the contact leaf doesn’t have bad side-effects based on your experience, like key chatter?

So straightening the protruding arm in the contact leaf doesn’t have bad side-effects based on your experience, like key chatter?

I have not noticed so far but I must say I never encountered debouncing issues with Matias switches. It is hard to tell if this was caused just by the early generation of the switches or the construction of their keyboards and the debouncing algorithm.

When I get more switches to play with, I’m going to move on to tinkering with the tactile leaf and testing the effects of lubing different parts. I’m finding ALPS switches easier to tinker with than MX switches.