Finally see the love for Linears

I was the same way. I was a big fan of the zealios, then i got creams and they were scratchy af so that put me off of linears. Then I got red inks and fell in love with linears. I sold all my tactiles pretty much besides the one set of 90 zealios for a tactile relapse in the future. Inks are amazing though, there my 3rd favorite one behind Alpacas, and then Tangerines 67g respectively. WELCOME TO THE LINEAR GANG

I really like tealios as well. However, they are too light for me so I need to do a spring swap soon.

H1’s (205g0 + 105 mix, filmed) with slow curved Sprit springs just about blew my keycaps off. I really appreciate the various degrees of “linear” you can achieve just by how you lube them and with what.

zealios do feel really great, one of the main reasons as to why I got the switch tester. I plan on getting some of my own in the near future. Happy to be part of the Linear gang <3

Never tried to film any of my switches, how is the process of applying them?

It’s a little tedious, but well worth the effort. Here’s a great thread on the topic.

oo alright thank you! Ill check it out

Same here, was strictly on tactiles for years until recently. I decided to give some lubed & filmed gat yellows on a hotswap build of mine, then fell headfirst down the linear rabbit hole. I have to agree with @ajoflo, properly lubed & filmed JWK/Durock linears are the way right now!

Well I’m all about linear already.
But I’m a bit concerned if I should buy some silk now for a keeb I’m going to build next year or wait and get a later batch that might be not as good.
Or is that time span to small for the molds to wear out?

Same for me, was a tactile addict until I found gat yellows.
Later tried gat blacks spring swapped wirh thick thock DL 62g. I like them even more, they look a bit lighter to me(or it may be due to a less moderate lube job).
My experience with linear is very small (and for other switch type as well), so much to learn and to try…
But do far I enjoy the experience.

Good question! I hope so, cause I have a funny feeling there is still a good portion of enthusiasts wrapped up in tactile switches & getting the “biggest” bump while ignoring what linears have to offer. I was one of them for awhile so we’ll see what happens, but more stock of JWK/Durock linears can only be a good thing either way IMHO!

Price wise they are quite interesting already.
Do someone know about the spring type on the yellow ones? Does the spring is like gat yellows ?

I think Mike was trying to emulate that feel with the 45g actuation 63.5g bottom out force of the silk/dry yellows springs, but a lot of people say the Gat yellow springs are pretty much made like slow curve springs so not sure how close they feel. I got a batch of dry yellows coming right now & some gat yellows to compare them too. When I get my drys (hopefully tomorrow) I’ll let you know what differences I can parse between them!

Good question! I hope so, cause I have a funny feeling there is still a good portion of enthusiasts wrapped up in tactile switches & getting the “biggest” bump while ignoring what linears have to offer. I was one of them for awhile so we’ll see what happens, but more stock of JWK/Durock linears can only be a good thing either way IMHO!

I just got my bag of Silk Yellows today, and I’m inclined to think so. There’s what seems to me a healthy amount of hype around them, and so far they’re living up to it reasonably well for me.

@KeebZone I’d put Silk Yellows toe-to-toe with Tealios all day - the biggest difference I’m experiencing between them so far is sound pitch, obvious price gap aside. I still might prefer Ink Blacks to the both of them, though: I like their weighting, the spring makes a bit less noise than the other two, and so far, I’ve found them a little more consistent than the Silks.

That makes me happy to hear! Now im really excited for my ink blacks to arrive.

Sorry for the bad lighting but for fun I decided to try and make a switch of my own so I contacted a manufacturer about it and just got this in the mail today. 1 tactile 1 silent tactile 1 linear 1 silent linear and I’m gonna compare them to my Zeal switches and see how they hold up. This was just a fun little experiment 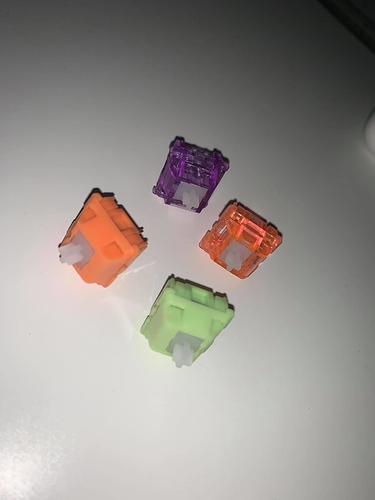 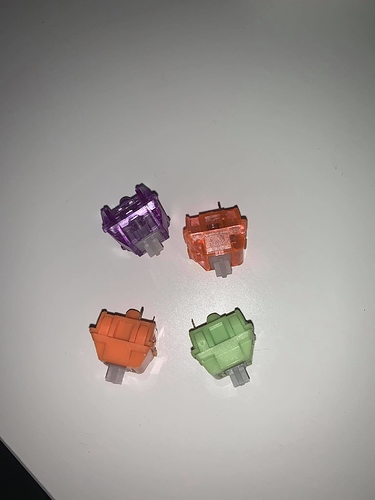 That’s really interesting! Do you mind me asking how much / what kind of input you’re able to have with them? I’m kinda fascinated with how the parts work together but don’t have a clue what the development workflow might look like.

I finally saw the love for linears by accident. I was looking for a reasonably quiet mx-compatible keeb during that short period of time when the only ones on the market were linear - the only ones I knew about, anyway.

My first set were Cherry MX Silent Blacks on a KBParadise V80 - it’s like a Filco, but every part is as cheap as possible - and so it sucks completely with a slim possibility of redeeming the thing. The Cherry “silents” struck me as kinda garbage and did nothing for my ambivalence towards linear switches…

But then I put this together for a friend: 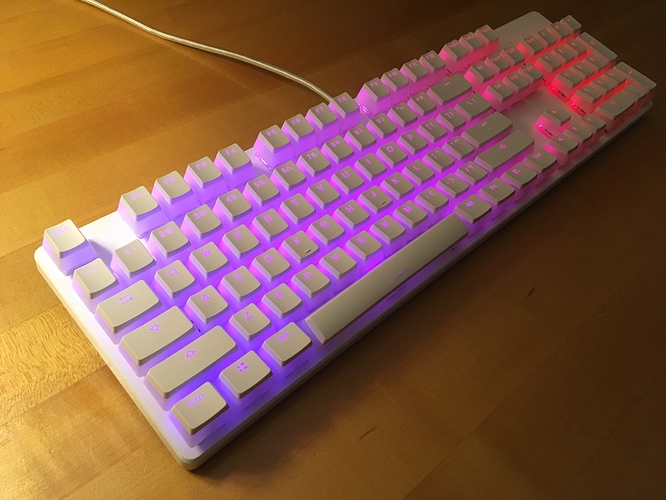 It’s a pretty basic-biscuit build, with an extra touch here and there. My friend had settled on Gateron Silent Blacks, which I’d assumed would be an (at the time) less expensive rough equivalent of the Cherry’s. I assumed incorrectly.

The springs and dampeners alike were better - gone was the subtle but sandy, mushy crunch my Cherry switches had - and in its place, a much snappier, more responsive feeling action. There’s still plenty of texture compared to Inks, for example, but it seems more consistent or less sandy- and I actually found it fairly pleasant.

So did my buddy. Anyway - using that keeb for a few days is how I caught the linear bug and, well… I just got in another bag today.

It was actually really straightforward, they already had a range of switches in the same housing and I just decided on the colours that I would want and weight, I went for 67g since it feels the best imo both for the linear and tactile switch. Since this is just the samples it was free and I just had to pay for shipping.

Thats a really nice build you got there for your friend. The purple and white go really well together!

Interesting… I thought linear is the majority. 8 out of 10 boards being sold on mechmarket are built with linear switches. I think linear is really where MX switches shine. I wonder whether hall effect is even smoother than the latest generation of MX linear switches.