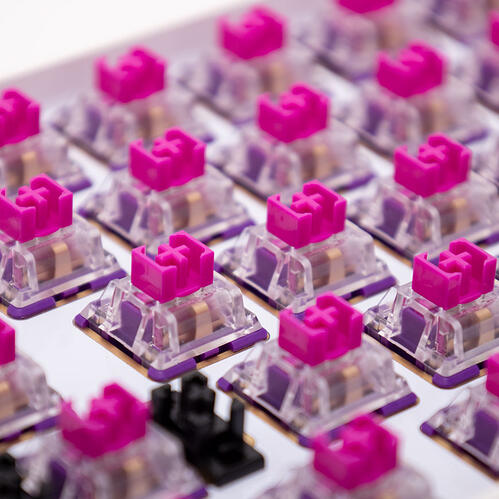 Hey all, Nigel from https://flashquark.com here!

I am excited to announce the release of our Quark switches. This is one of my favorite switches ever. I am obviously biased, but I personally designed this switch based on what I felt were the most desired characteristics in a linear switch by the mechanical keyboard community. I am using the switch in my keyboard right now to type this out and they feel heavenly.

A rundown of the basics:

It’s a linear switch that comes in 62g or 68g spring weights.

The springs are our very own Flashquark two-stage extension springs which provide a firm, consistent feel during the downpress. There are no discernable spring-ping or crunch sounds either.

Switch leaves have been pre-lubed with just the right amount of lube so that they glide like butter without gunking up any other parts of the switch.

A combination of a polycarbonate top housing and nylon bottom housing contributes to the smooth keypress as well as creates an ideal sound profile.

The switch stem is a “box-like” stem made of POM for self-lubrication.
Some people are inclined to inclined to lube the pole of the switch stem as well as add additional lubrication to the sliders but I really think that you’ll find its not necessary for Quark switches.
On a random note, as someone mentioned on Reddit, it shouldn’t be called “box” because it implies that it was designed according to Kailh Box specifications. Do we have a word in the community to describe this kind of stem then? It is not accurate to call them “dustproof,” because that is not the intention of the design; It’s meant to prevent wobble.

Come check it out for yourself here: https://flashquark.com/product/flashquark-quark-switch-for-mechanical-keyboards/

Singles are available for purchase, so you can get just a few to test out before going all in. However, I don’t think you’ll be disappointed.

In addition, if you do happen to place an order on our site, leave a note for us during checkout asking for a tester Quark switch (indicate 62g or 68g) and we’ll throw one into your order for free.

That’s really cool! Glad to see you folks getting into doing your own switches. I’ve been enjoying your springs for a while now - I think this only makes sense as a next step.

I think the community really does need a name for stability-focused stem shrouds; plenty of manufacturers do use “box” but as you pointed out, that does carry with it some confusion about Kailh’s semi-sealed contact system. I think even “dust-proof” caught-on as a misnomer because that’s part of the purpose of those sealed contacts - add to that most people just thought Kailh’s switches were called “boxes” because of their square stem shrouds, and we have all the perfect ingredients for a big pile of ambiguity.

I think I’ve heard some people call them “walled” stems - I feel like that’s short, simple, and descriptive enough that it could work. Whatever it ends up being called, I’m a big fan of the housing rails having more surface to stabilize against and how that makes a switch feel - so high-five for making that a key part of your design here.

Speaking of walls and shrouds and whatnot - the one on the Quarks looks a bit like those produced by Haimu - is that who you have doing the production? Quite a few of my more recent favorites from different vendors came from their factory. Either way - these sound like a great fuss-free switch - I hope they do really well!

On a random note, as someone mentioned on Reddit, it shouldn’t be called “box” because it implies that it was designed according to Kailh Box specifications. Do we have a word in the community to describe this kind of stem then? It is not accurate to call them “dustproof,” because that is not the intention of the design; It’s meant to prevent wobble.

The BOX name do refer to the box enclosure of the contacts and not the stem shape, however almost everyone thinks it’s due to the stem shape.

I don’t think it would be wrong to call the stem “box shaped”, nobody would mistake them for Kailh BOX switches.

Also redditors love drama and things to get mad about ¯_(ツ)_/¯, so I wouldn’t worry about it much, I agree with the user above me that dust-proof would fit as some companies (like Outemu) use that term.

I believe that Kailh’s original intention for naming them “Box” switches was because of the stem shape. As a vendor of Kailh switches, we can get detailed information about all of their switches, and they did mention that one of the marketing points of Box switches was that they had box shaped stems that prevent dust from getting into the switch and help to reduce wobble.
Their product description on this page supports that idea:
https://www.kailhswitch.com/mechanical-keyboard-switches/smt-key-switches/box-blue-white-switches-for-mechanical.html

However, I think confusion arises from the fact that on top of that, the sealed contacts inside the switch add another layer of dust proofing, because even if dust does manage to slip by the walls of the “box,” it won’t affect the conductivity across the contacts/leaves.

However, with other switches that have supports along the sides, they have cutouts in the front and back of what would otherwise be a box-shaped switch. The primary reason for this is because Kailh has a patent on the box-shaped stem as well as the sealed contact system. However, one benefit of the cutouts vs the original full box is that it maintains the ability to reduce wobble while also minimizing friction of the walls of the box against the sides of the housing. Due to having cutouts though, it loses the ability to keep dust out of the inside of the switch, as the dust can just fall in through those cutouts and then ride along the sides of the housing until the stem is pressed far enough that there is a hole to drop into that leads to the inside of the switch.

I think that the term “walled” stems definitely works and that is what I’m going to personally call it from now on. Thanks for the tip!

Yep, we had Haimu do the production for our switches. Another way to distinguish their switches is the appearance of two small holes on either side of the stem protrusion on the bottom housing. We decided to go with them because I, just like you, noticed that many other high-quality switches have come from them recently.

Actually, when I was briefed on the specs of the switch by Kailh representative, I do recall them mentioning that it is called a “Box” switch because of the box shape around the stem. Check the reply that I wrote to @Deadeye for more details!

I do agree that (some) redditors do love drama though, haha
It’s definitely more calm and technically oriented conversations here on Keebtalk, which is a positive thing.