This had to happen sooner or later, so I may as well just do it and get it out of my head. The idea is simple: Atreus, but flat. Using the choc switches.

I prepared the basic PCB design a while ago:

But I didn’t hurry. I got some valuable feedback, and added two more thumb keys, and rotated the ones that were there already to normal:

But there is still this empty space smack in the middle of the PCB, so I thought why not put a PSP joystick in there, with two mouse buttons, and emulate a mouse as well?

That is my most recent design, and I think I will go with that, except I will also add a few LEDs on the free microcontroller pins, so that I can use them for debugging and as status indicators.

I’m still waiting a little bit with ordering, to see if I will come up with further improvements.

Mechanically the plan is very simple: just the PCB with the choc switches directly on it, and later maybe I will laser-cut something between a top plate and a case, that goes between the PCB and the switches.

So after a week of working on it, and one complete redesign (I realized that Inkscape defaults to different DPI after upgrade, and that all my PCB outlines were about 10% too large as an effect), I finally ordered the PCB. Of course I had to do it during one of only two times in the year when China has holidays, so it will take another week for it to be fabricated, but that’s just my luck. The design looks thus:

flatreus21937×838 103 KB
There isn’t much unusual going on there. 44 switches with their corresponding LEDs, arranged in a 11x4 matrix, with 5 LEDs for various status indicators, a PSP 1 joystick and two tact switches for mouse emulation, and a SAMD21 microcontroller with its required two decoupling caps and voltage regulator. And a USB micro socket (with a header for an optional cable as well).

The soldermask will be yellow.

It’s finished, and it works as expected. 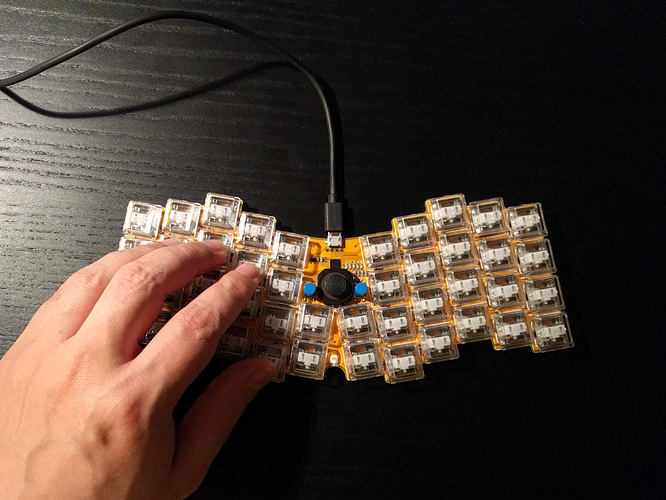 The microswitches I used for mouse buttons have a bit larger actuation force than I would like, I might replace them with lighter switches at some point.

I tried it with the original Atreaus layout, but somehow I can’t get used to it — it seems to be designed by someone who uses the numpad a lot, and that’s not me. So I went with something more planckish:

I’m also using the hold/tap mechanism here for all the modifiers.

This is an awesome project! I was just thinking of an Atreus-like low-profile keyboard to use on top of the shitty MacBook’s one. So I’m super interested in this! Thanks for sharing the design sources