Hi, does anyone here own or know whether the new gateron pro yellow 2.0s have the improved switchtop that was found in the gateron oil kings that help with north-facing interference? it was mentioned in another thread on this forum here Gateron Oil King Switch Review - #3 by Deadeye as well as in this video Akko MOD005 | Gateron Oil King Typing Test - No North-Facing Interference! - YouTube
if anyone has any info on this it would be quite helpful, thanks 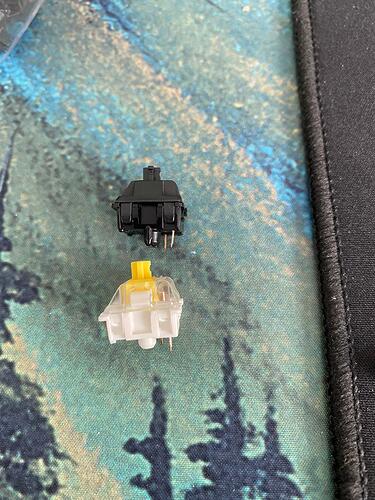 Not the easiest thing in the world to photograph but yes, they both have the same top housing curvature around the leaf so you should be good!

wow thanks for the quick reply. just to make sure, these are the new gateron pro yellow 2.0s and not the previous version right? thanks

Ah, didn’t know there was a 2.0, honestly. From what I gather, it looks like the improvements focus on light diffusion. That said, I found them on Divinikey and their pictures show the same housing structure. So while I can’t say with 100% certainty since I don’t have that revision in-hand, I think you’re pretty safe in assuming that they’re the same from that standpoint.

Ah I see, alright then. Thanks so much for your help!

My KS8 and KS9 Gateron Yellows also have this dent, same with the Golden Cap Yellows.
Weirdly only the Cap yellows don’t have issue with north facing switches, it’s dent is probably bigger.

Edit: Maybe the latest switches are designed to combat this issue.

Can confirm; this is something I ran into quite recently as well.

In one form or another, it seems this dent has been around for a while, and that there are at least two iterations of it, maybe three or more.

I just did :3ildcat’s paper strip test on five different switches that have a housing dent, and here’s the results:

This is both mildly fascinating and fairly confounding; perhaps this is why Gateron doesn’t even talk about this feature - it may still be in the experimentation / polishing phase.

I’m not sure if my Pros are v1 or v2; they came pre-installed in a recent keyboard. With the paper strip test, the Pros do fail - but just barely. The Cickiez fail definitively.

The Pro Yellow, however, is less definitive. It grips the paper somewhat. I’d still call this a fail as it indicates at least a strong probability of housing collision.

I almost want to get some of that pigmented sheet that dentists use to adjust someone’s bite; it shows where two surfaces touch with the sheet in between.

Clearly this dent is an intentional design, and I can’t think of any other reason for it to be there other than to mitigate cap interference - but it is interesting to me that:

a.) since its introduction, not all Gaterons have it
b.) there appear to be at least two versions of this dent
c.) the dent appears to have varying degrees of effectiveness depending on as of yet unknown factors

I’m curious as to the internal history of this shape; when did it start, is it accounted for with any kind of internal designation or public-facing model number, etc… For example: I have milky yellows (KS-3X1) in my collection that have the dent - and I have some that don’t. I also have some switches I’m pretty sure are at least a couple years old that have it.

I’m also aware that some of the switches that pass (albeit barely) with GMK caps do not pass with some other Cherry profile caps that might be a hair thicker or sit a hair lower. So - at very least, this is a design feature that is only partially successful in its apparent goal.

I’d really love to see the North-facing issue become something of the past, and I do believe Gateron is very close to completely solving it without significantly departing from the MX pattern. It may take nudging the leaf towards the center by a partial millimeter or something like that, but my pipe dream here is to see every manufacturer adopt it sooner or later.

This is a topic in which I’ve stuck a continual pin; keeping an eye out for any information that can tell me more, and tell me more definitively which switches are North-friendly.

Aside from the dented Gaterons, there are some other switches that are North-friendly when it comes to low-ish profile keycaps like GMK:

Wow. I was not expecting such a detailed and thought out reply haha. From what this video Gateron Pro 2.0 Yellow vs Pro Yellow - YouTube says, it seems that the pro yellow 2.0s are a bit improved when it comes to the interference? At least when compared to the older version that shows a lot more bite when doing the paper strip test.

I am also quite interested in this topic and I share your sentiment in hoping that this problem will soon be a thing of the past.

Interestingly enough, not all long pole switches can clear the paper strip test even though there supposedly shouldn’t be any interference. One example of this would be the Durock POM switch, which does have reduced travel but still does not fully clear the paper strip test similar to the gateron pro yellows in your experience and does show some form of interference when pressed down in north-facing orientation on a keyboard. Gateron’s speed silver line seems to clear the paper strip test just fine but I’m not too sure about Outemu’s silent switches. My theory on why some gateron switches with the dent don’t have interference while others do may be because of the overall height of the switch and top housing. Maybe some switches or top housings sit just a few millimeters lower than others and that prevents the collision with the keycap. But once again, this is purely conjecture and as you mentioned, different cherry profile keycaps may still run into the same issue depending on the thickness. 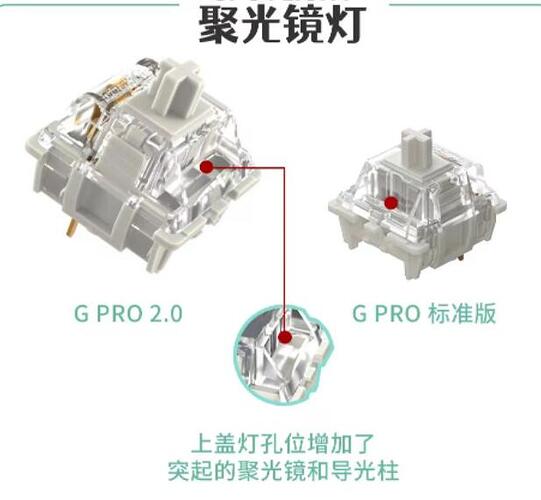 The first revision of pro yellows have a hole for the smd led area while the 2.0s have a convex cover to diffuse the light, similar to what ttc and outemu does for their switches.

Very useful! Mine are definitely the first version, then.

not too sure about Outemu’s silent switches

I happen to have some Silent Peaches on my desk and gave them a test - they don’t really pass. If you type lightly enough not to compress the dampeners at all, then yes, you may avoid housing collisions - but those dampeners are soft - so the reality is that you will have housing collisions, just inconsistently.

I hate to say it, but I think this calls for a spreadsheet.

I wish we could have a way to contact manufacturers, even for just curiosity and fun information, sometimes Kailh posts on Reddit and reply to my random questions.

Interesting Kailh didn’t pick up the Archon-Art BOX design, if there any information about this? I really don’t see a reason not to pick this up unless it wasn’t successful.

Interesting Kailh didn’t pick up the Archon-Art BOX design, if there any information about this?

I’ve always assumed it was related to some kind of legal agreement, that Archon (the company that commissioned them) owns exclusivity to that particular shape. For me, that logically explains why Kailh hasn’t used the shape on the square-stem switches, but has on the circular-stem ones. Those came out not too long after the Archons, and basically have the exact same shape - except for the stem, and the hole that accommodates it.

I saw that as a technical side-step of such an agreement, prompted by Kailh realizing the shape’s value after they’d signed it. Still - it seems like they’d have found some other way to adapt the other housing as unlike the Cherry based designs, there are no functional parts in that area - it’s just empty space. The newest square-stem BOX switches still have the old shape, and that’s what I find curious.

Kind of an aside as I’m watching videos that compare yellowses… I’ve been hearing about KS-9s for a long time, but G-Pro or Pro whatnot from Gateron is a pretty new thing, right? I didn’t start hearing about those until much later than KS-9s, but at this point I am seeing those equivocated in multiple places.

In continuation of this aside - I agree with Kile that the Pros are the current smoothest Yellow when it comes to stock experience.

Update: I’ve bought and tried both the gateron pro yellow 1.0 and 2.0s.

I agree that a spreadsheet would be helpful to document and keep track of all the switches that don’t exhibit north-facing interference. If anyone would like to start one, I would be more than willing to contribute in whatever I can with my modest switch collection.

That would be the KS-9 Gateron Yellow, the KS-8 is the black bottom clear top version (my personal favorite version).

I think I commented on that subject on another post, seems like the dent is somewhat recent thing as a Gat milky yellow sample I have doesn’t have a dent while the KS-8 and 9, along with Golden Cap all have the dent.

I’m not sure about the purpose of the dent pre-retool, maybe it was an unsuccessful attempt or just a mistake they rolled with?

The dent pre-retool wasn’t so successful as the top part still collided with the keycap, but if you’ll look closely the top part is sunk a bit post-retool and allows the keycap to freely move.