A place to discuss Linear Thock Bobas and their variants, such as prototype stems and the limited-run *nixdork versions.

A bag of Boba LTs from 3DKeebs: 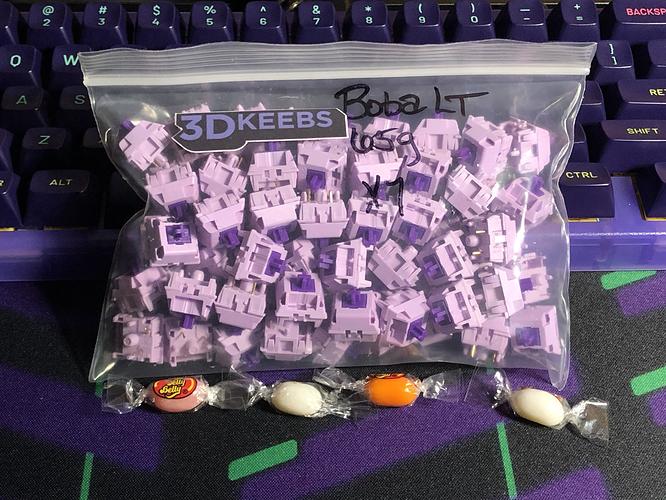 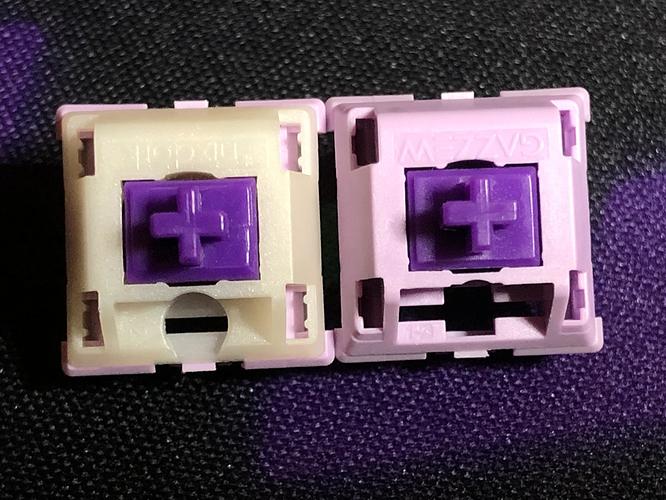 Prototype LT stem on the left, *nixdork on the right: 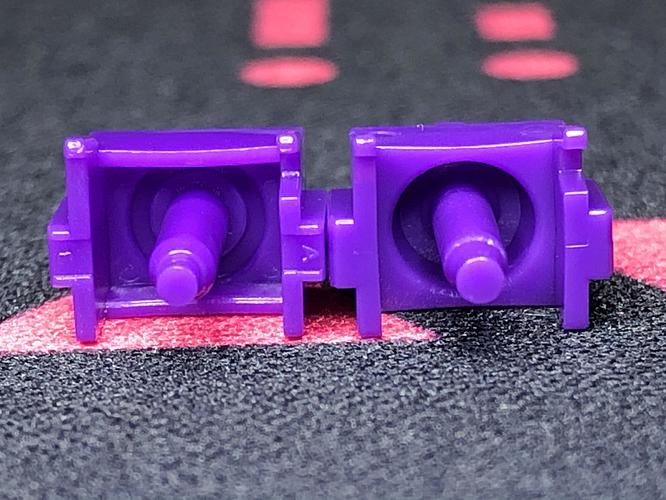 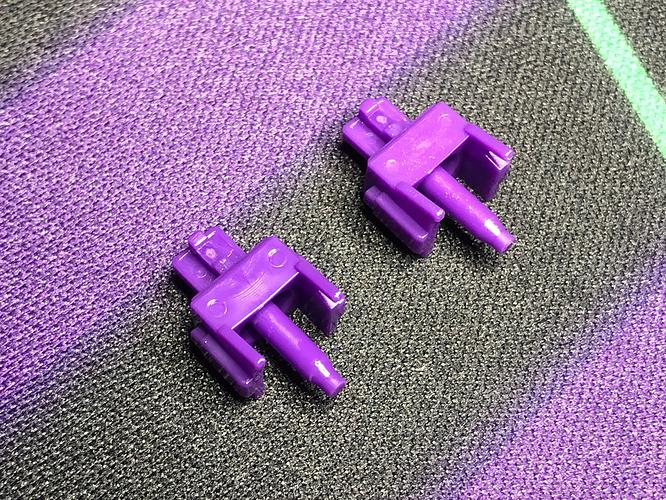 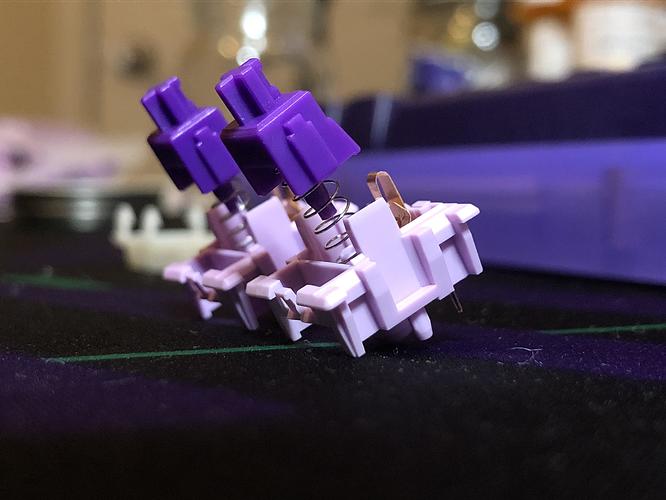 Bottom housing comparison; *nixdork on the right this time: 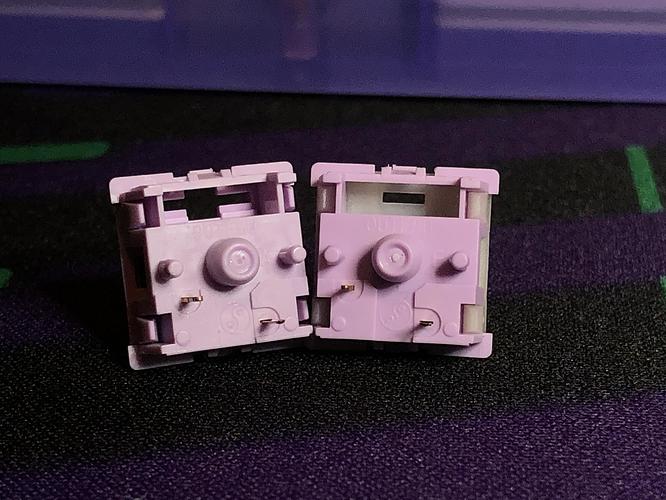 Like with the stem, the *nixdorks appear to use the same tooling for the bottom housing, just with a bit more saturation in the color - whether that’s a fine adjustment or just production variance, I have no idea.

For an up-to-date list of official places you can get these, check out gazzew.com.

What have you observed - or would you like to know about Boba LTs?

I’m looking forward to all of your findings. I always enjoy reading your switch descriptions and comparisons. I haven’t tried these yet but have been on my list to switches to try.

Thanks to @sarvopari for suggesting this thread.

I figure this is as good a place as any to post this photo: 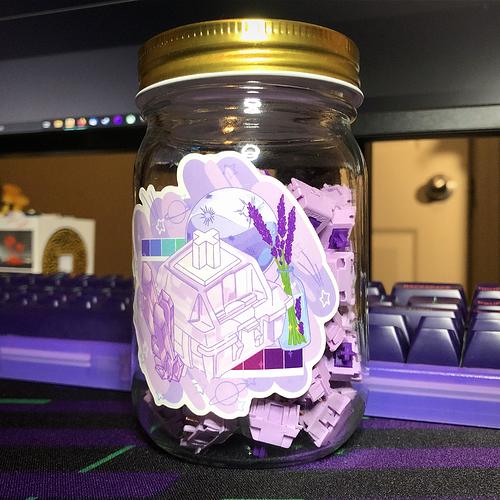 I don’t have any Lavenders, but I now have switches that are lavender - so I get to use another of @Seo_bun’s switch stickers. :3

I’m not exactly sure where they actuate, but I can tell you that they are shorter travel due to the long pole the stems bottom-out on.

Edit: assuming they are about the same as the U4T in terms of travel, they’re probably close to 3.2mm. It’s harder to speculate about actuation because Bobagums and U4s actuate at very different points, around 1.25mm and 1.7mm respectively. It’s probably safe to assume these are in that range, though.

One more question: do you know if the shorter actuation is due to the stem or the leaf? Curious about using the housing with a standard Gateron stem

Ha, the most accurate answer might be “yes” - I’m actually not sure about the actuation, but generally speaking it is the interaction between leaf and stem that determines it. When compared with something “standard”, say, a Gateron Yellow, some switches may accomplish early actuation by having a differently shaped leaf, stem, or both.

In this case I’ll have to do some testing to actually answer this, but I’ve got some time on my hands and the means to do it, so I’ll get back with an update in just a bit.

Following up on my initial impressions (What's on your workbench today? - #515 by sarvopari):

Alright! I tried some stuff, did a marginally scientific experiment, and have some more information for you. 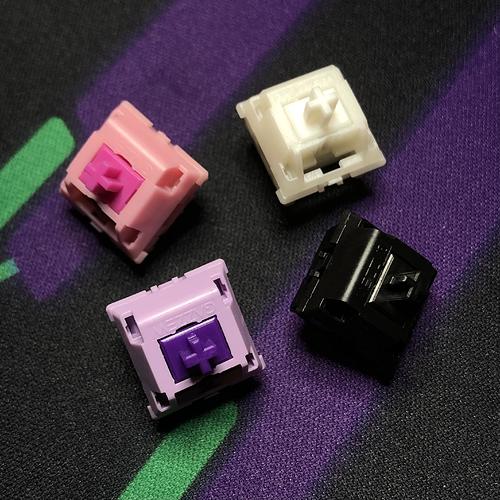 A bundle of Bobas

Here’s what I did; I placed some different Bobas in a row, and levered a flat object against the case to more or less press them all uniformly - first as a group like that, and then in pairs to narrow things down: 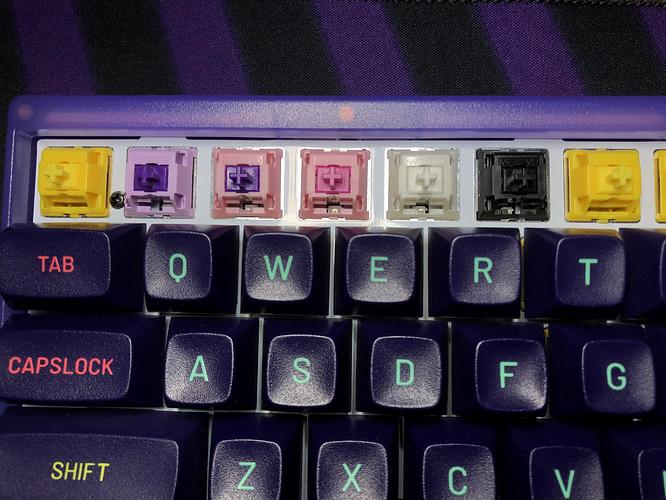 Granted I don’t have a means to measure the exact actuation point (yet), but I think I have a good idea of where the new LTs connect. Here’s what I found:

Oh yeah - they come pre-dipped, too! 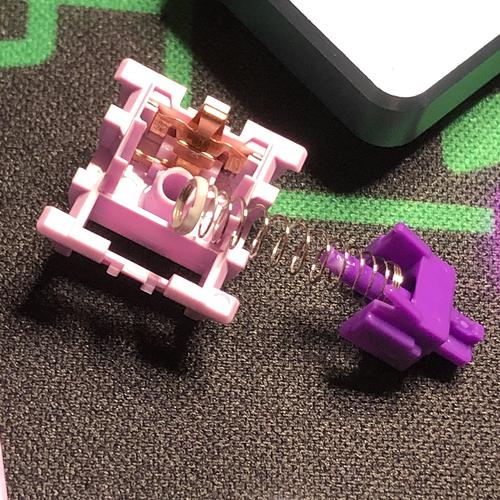 Hey, thanks for the detailed impressions. Looks like a good option for fast switch, to be fair I think I dont want lower than 1.5mm though.

For what its worth, the housing looks really sharp… good sign of quality

Hey, do the nixdork and the production versions feel significantly different?
I know it’s supposed to be tighter tolerences on the nixdork but does that affect sound and push feel?

They do feel pretty similar; initially the*nixdorks were going to have a different spring, but as far as I can tell it’s the same, down to the factory donut-dipping.

The top was supposed to be more tight, but for whatever reason it’s actually less tight than a typical Gazzew top - I’m guessing this was not the intention but there it is.

With *nixdork LTs vs regular LTs, you’re trading some stability for some smoothness.

There’s a little more friction sound and feel to the standard ones, but they have unusually low wobble. The *nixdorks have a more standard amount of wobble (definitely not bad), but thanks to that more loose grip on the stem, it moves with less friction.

This is just compared with each-other; I’d say standard LTs have less friction feel than any Nylon switch, for example - it’s just more than the *nixdork, which itself I’d consider extra-smooth.

I am very happy with Cherry blacks but Boba LT peaked my interest bc it seems to sound lower-pitched than Cherry blacks when lubed. BUT, I hate compromising key travel so I’m going to experiment trimming the long poll.

Because almost all US stores were out of stock (at end of January) but I found some at LiliGecko.

The short travel may not be solely a function of the pole. The stem is also lower in its resting position, compared to switches like Inks, MX Blacks, and Tangies. Just something to consider as you experiment with lengthening the travel.

Yup. I noticed some of that with Boba’s earlier switches which is why I’m not certain things will go as planned. Thx for the reminder.

I’ve heard you can get more easily get consistent results by drilling-out the bottom tube, the downside being occasional drips depending on what kind and how much lube might be in there.

briefly looking up sound tests, the LTs sound very similar to U4Ts. I haven’t had them myself tho.

I haven’t tried U4T either but based on sound test video, I’d describe the sound as tapping on plastic soapbox wrapped in a towel which, at low-pitch, should sound fairly pleasant.

Thanks for the good news. Drips aren’t that big an issue for me.

One thing I’ll add, drilling-out the tube will change the sound, since the stem will no longer bottom-out on the center pole.