Getting ePBT PBT keycaps in 2022

I’m thinking about picking up the ePBT 9009 PBT set but I’m worried about couple of things and wanted to hear your feedback on their recent sets.

I have read that ePBT keycaps are notorious for badly warped modifiers, is that a common thing? I imagine due to the volume it natural to see more complaints but the more I read the more issues I see.

Are those issues still relevant today?

Another thing that bothers me are sharp edges, does ePBT has soft or sharp? heres a comparison between soft and sharp edges (middle is the softer). 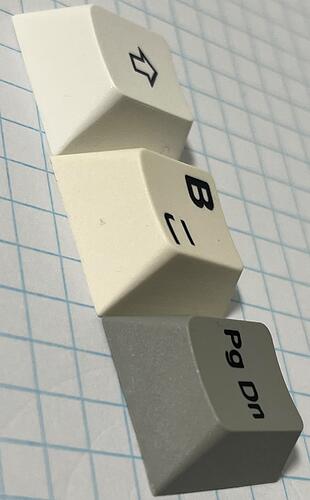 I’m asking as I’ve been thinking about getting another set from a manufacturer I’m already familiar with, basically the same as the middle one without the JP sub-legends.
It’s pretty great quality, it has soft edges and sounds nice, but I’m not sold on the color (WS1).

Another thing that bothers me are sharp edges, does ePBT has soft or sharp?

I’m going to say soft. The NicePBT sets I have from Cannon Keys are definitely edgier than the ePBT x GOK’s – which feel almost XDA-ish.

I have read that ePBT keycaps are notorious for badly warped modifiers, is that a common thing?

I think so, but like most things it’ll vary from vendor to vendor. I usually don’t have any warpage or crookedness with IFK or NicePBT sets since their QC is (for the most part) on point.

Sits higher than GMK resulting in a gap on some cases.

Thanks for the reply, so would you recommend getting the ePBT 9009 set or should I look elsewhere?

I have ePBT 9009 and I would give NicePBT Classic Beige a try first if that’s the look you’re going for. My main gripe would be dealing with spacebar warpage which was pretty bad in the set I got. Otherwise, it’s a good set. IMO they most resemble the middle keycap. Never noticed the edges being abnormally sharper or anything (like most clone PBT caps seem to be).

I have two ePBT 9009 sets and I’m happy with them.
No spacebar warpage whatsoever.

Great, do you have an old standard Cherry keyset (beige one) to make a picture to see if the colors are matching or not ?