Have you tried ortholinear and how long did take?

I have been using ortholinear board for several years now. I personally found them super easy to get used to and didn’t sacrifice any speed at all when switching. Over time, I noticed that it’s much easier to find keys since they are symmetric on both sides of the board.

For those that have tried ortho, was this the same experience for you? I’m just curious if I’m one of of the few that finds the layout easier to acclimate to than staggered boards.

I’m waiting on a plank from drop to arrive.
I’m kind of scared that I will like it and make all my expensive keebs useless.

I tried for a few days and it didn’t seem too bad, but something just didn’t seem right, then I realized I had two

keys instead of ‘B’ and ‘N’ keys and my board had to be programmed with some sketchy shit from a google drive and I had wiped my pc so I didn’t have it anymore… I got a plank after that but was using it as a macropad, I should try using it as a real keyboard

I ended up selling all of my topre boards except for 2 of them when I realized ortho was more fun to type on. It’s still easy to switch between the 2, I just prefer my ortho layouts hands down.

I only own 1 ortho board. First few days was around 40wpm instead of 100. But I got up to 70 after a day or two of practice. The bottom row is the only thing that felt much different to me. I don’t use it much anymore. I’m in my 40s and I’ve never had pain issues related to my decades of keyboard/mouse habits. But ortho actually made my forearms sore. Probably just from a different position, but I didn’t like the sensation.

Interesting. I’m in my 40s as well but found that my forearms never get tired on ortho compared to staggered. To be fair, I switch to Colemak years ago and was Dvorak 10 years before that, so I haven’t type on standard QWERTY in at least 15 years.

The only problem I’ve had with my X-Bows splayed ortho is that because the enter key is between the “B” and “N” keys, I keep hitting enter when I go for a “B”. Apart from that it hardly took any time to get used to: I can switch back and forth now, but for the first couple of weeks I couldn’t type accurately on the regular keyboards at work!

Yes. It took only a few days to get used to. IMO, getting used to the layout is not a problem although actual duration will vary depending on the person.

That said, I can’t recommend ortholinear if you also use non-ortholinear boards day to day. In my experience, differences in the layout was just a minor irritation in the beginning but, over time, it grew and eventually became unbearable because the difference became a source of distraction when I needed to focus on getting work done.

I did not enjoy the ortholinear layout, but I have what I would consider to be short pinky fingers. and having my arms at a slight angle to the keyboard helps, with reaching the upper rows. 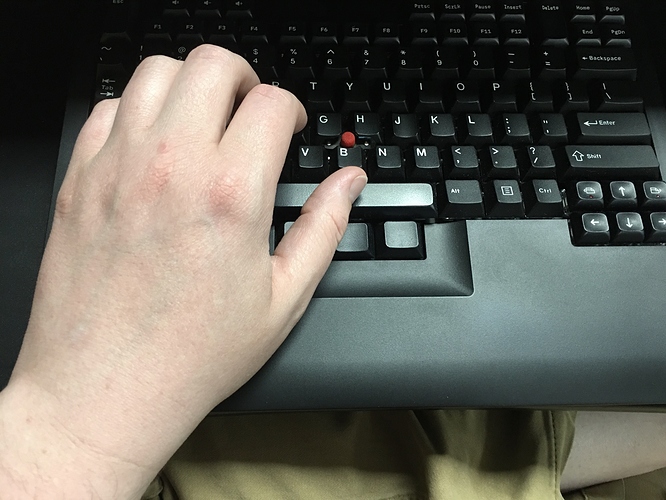 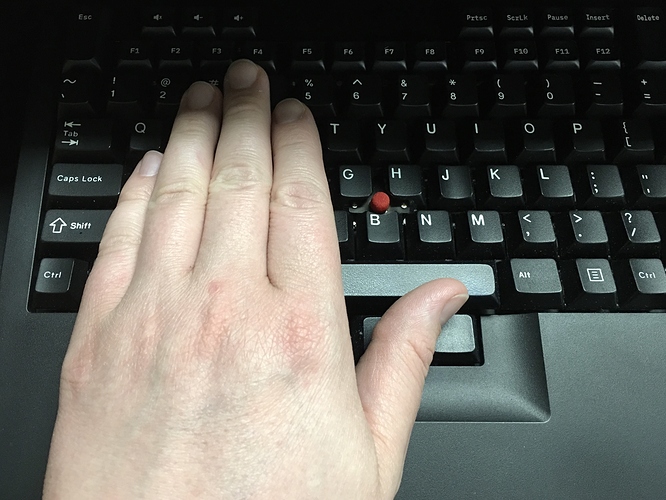 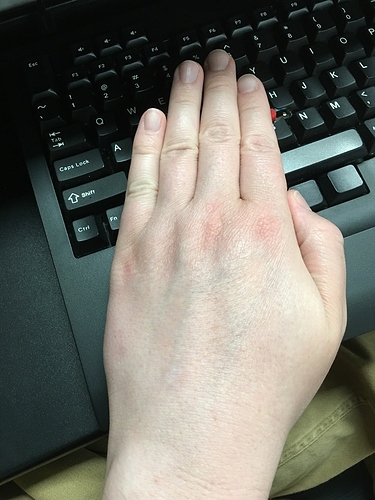 It probably doesn’t help, that I work in IT, and have to use a variety of different keyboards on a regular basis, so I never really learned the muscle memory for the ortholinear layout. I tried it for 2 weeks to a month, but I just couldn’t get use to it.

That really interesting. You think having having short pinky fingers is more suitable to staggered? Or are you saying that since you learned on staggered you just learned to compensate for having shorter pinkies?

I don’t feel I have the authority to answer that, as I’m not sure what the average pinky other fingers ratio is, but this is the internet, so I’ll try.

Staggered does seam to allow for easier typing, in my situation, but trying to do any sort of ergonomics research always seems to turn up a bunch of she said he said BS. Some show your hands going straight on at the keyboard, others show them being angled off to the side while keeping your wrists straight (Which makes more scene to me because you’d have to be a literal bean pole, to type with you hands stairght and not be cocking your wrists sideways…). A lost also leave out top down photos. and only show side angles.

Best top down view, that I can get taking the photo my self: 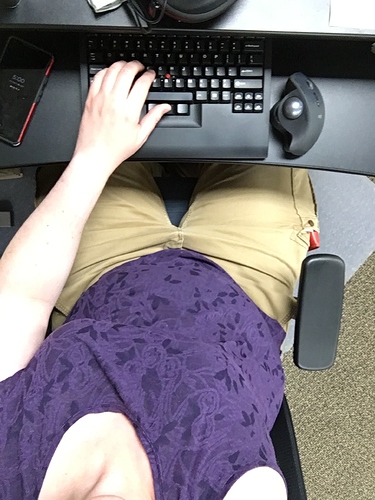 The angle from my arm wrests to where I place my hands on the keyboard is symmetrical and my wrists are straight.

As for my understanding of it, I think the most important thing, is that your wrists stay as straight as possible on both the x and the y axis. Part of the reason, that I tend to gravitate towards staggered 60% width keyboards (So they can be centered in my work space, while allowing for my mouse to be close.). I’ve also used Ergo keyboards in the past, like the Microsoft Natural Ergonomic Keyboard 4000, but if you look at that, they also swoop / curve the rows of keys, so the outer keys are closer to your pinky, then if they had been straight.

These back up my thoughts
Apple: 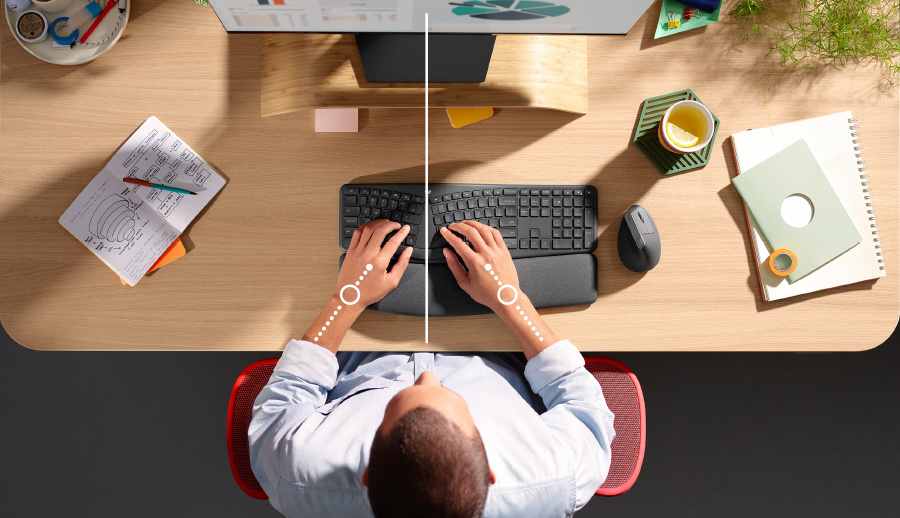 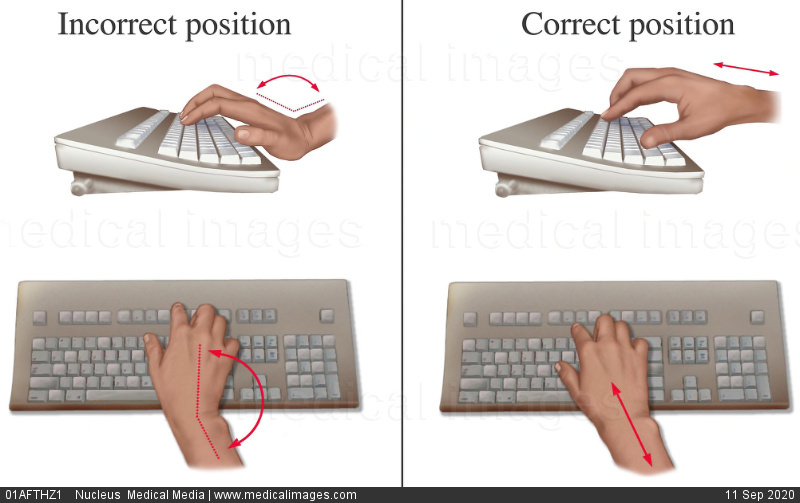 These don’t back up my thoughts

The first time I used ortho it was atrocious but after a day or two of getting used to the new distances I was able to type competently. Toughest part was just figuring out which function layer layout works best and then having to re-remember it every time I swap from a normal staggered board.

That’s why I like my boardwalk. You can focus on just the layout and not worry about remembering where all of your keys are… because they’re all there

Don’t get me wrong, I love my minivan. I’m actually quite used to all of my weird layers on 40%… I just don’t mix it in with ortho.

Same here. So far, the Ergodox hasn’t taken, but I haven’t really put the time in tbh.

Took me a few weeks to get to my base speed, about two years now of happy user experience.
I think split format is where ortho shines best. My first split build takes too long to complete, but feels really promising already.

I’m tried and trying ortholinear layouts once in a while, but so far I always switched back to and still prefer a horizontally staggered layout.

Conclusion: If I want to use an ortholinear layout, I need row 4 (ZXCV…) with an offset of one, because having S directly below X is awkward for me as an Emacs user who often has to type Ctrl-X Ctrl-S (save file) and I’m very used to type this with the left pinky on Ctrl and the index finger on X and the middle finger on S. This no more works with a standard ortho layout as I would have to bend my index finger more than is comfortable.

There are though two “close to ortho but still staggered keyboards” I’m able to work with well:

Nevertheless there are two more ortho keyboards I want to toy around with:

Also thinking about these keyboards or kits:

Then again, I also never got used to split keyboards (built a Keebio Fourier, a split staggered 40%), so maybe I’m just too used with the classic staggered layout and fine with it. But I do like 40% staggered keyboards and similar layouts with a lot of non-standard key positions including non-standard stagger offsets, too, so it can’t be just the classic layout.

I have what I would consider to be short pinky fingers

Looking at CosmicKira’s pictures, my pinkies are just a tiny bit longer than her’s (compared to the other fingers), so maybe that’s also an issue here. In general I seem to have rather small hands. Not sure if that has a bigger impact on my keyboard preferences.

So I don’t expect to really switch away from staggered layouts, also because I’m totally fine with it. My ortho adventures happen mostly because I’m curious on trying out new things. (And because I like collecting keyboards with weird layouts.

I just finished my Viterbi (split 70% ortho) build last weekend. I was at around half typing speed and terrible accuracy the first day I started using it, today I’m back up to normal speed and accuracy. I was specifically missing the C and V keys badly for a couple days until I went back and forth between keyboards and realized my left wrist actually bent to compensate for the row stagger layout.

I’m still getting used to chords because coming from my HHKB the hand angles for common chords are different enough to make me still think about it. Plus since every key is 1U there’s no physical indication I’ve hit the correct key, which I didn’t realize would be that important at the time though in hindsight is obvious.

The other thing that is taking a little longer to get used to is the cluster of Enter, Backspace, and Up arrow. I was missing amongst those three keys annoyingly often at first, but keeping at it has made my mistakes less frequent though they’re still not gone yet. I’m hoping those completely go away, as mistyping those is especially bad. If it’s still a problem after another couple weeks, I’ll probably remap some keys.

Overall though I’m very pleased with my split ortho. Once I get confident enough with it, I’m going to start working on getting good at switching between ortho and row staggered so I can switch when necessary. I suspect that will be a longer process.

I have a Planck and never quite got used to it. I tried but I really didn’t like it all that much. I haven’t used it in a few years but I think I still prefer a staggered layout. It just seems more natural to me.

I definitely favor traditional staggered layouts, but my experience with ortholinear layouts has been a relatively good one. I got a NIU mini to give 40% ortho life a try & while it was not for me (more the 40% than the ortho layout, didn’t like having to depend so heavily on layering), typing on the ortho layout didn’t take but a few days for me to get used to. Also after a couple weeks of DDing the NIU mini & memorizing the layering, I have been able to switch between ortho & staggered layouts with only a few min adjustment period.

I have considered giving something like an XD75, Preonic, etc. a try which would not rely so heavily on layering. So I can’t say for 100% sure that ortho layouts are not for me, but I can say I do prefer staggered & do not see that changing.