Hello, my name is Jay, and I'm a keyboardholic

I recently came across this forum while watching Taeha, and I’m liking the culture here so far. I’m an artist/designer in Austin, TX and only got into mechanical keyboards as of May. COVID has shaken up my life quite a bit, though oddly, for the better. I was furloughed for a while, which gave me some time to chase freelance work and freshen up the ol’ resume, ultimately leading me to a newer, better paying job. Naturally, this means I have the opportunity to pick up a new hobby…

It all started innocently enough, wanting to replace the Logitech G110 that I’d been using for the past nine-ish years. No lie, I almost bought a Razer without doing much research, but figured I should poke around on Reddit first to see what the hivemind liked, and fell down the rabbit hole from there.

Still, I wanted to take it slow. I didn’t want to jump into a group buy, and I didn’t know what switches I liked. I needed something I could get quickly and experiment with, and the GMMK sounded perfect. 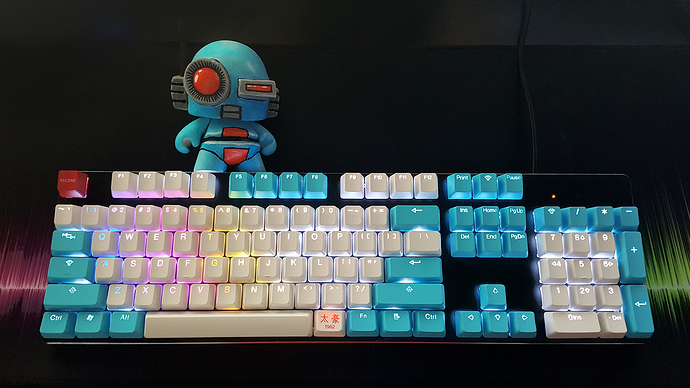 I think I ordered the Tai-Hao caps the day after it arrived, as well as a switch sample pack, though I enjoy the default Gateron Browns immensely.

Of course, once I’d had a taste, I had to have more. So I started looking for a DIY kit and managed to snag a KBD67 mkii v2 hotswap.

This little beauty was my gift to myself for my birthday and landing a new job. Once again I went with Tai-Hao caps, mostly for convenience, as well as Zeal stabs and Gateron Clears, which I liked when I tested them, but are way too light in practical use. I’m going to try give them a chance, but I think I need something heavier.

I suppose it’s also worth mentioning that my boss let me pick out the mouse and keyboard for my new workstation, and was kind enough to order me a Rosewill RK-9000V2, which might low-key be my favorite as far as how it sounds. Something about its construction gives it a very satisfying pok-pok-pok sound as you’re typing.

I’ve had a lot of fun looking at everyone else’s boards and I’m looking forward to chatting with everybody!

Welcome! I also was looking into buying a Corsair and came down the rabbit hole. It is a very slippery slope my friend.

I’ve definitely had to consciously pump the brakes. Fortunately, I think buying the 65% will keep me satisfied for a while.

Welcome to the community

Welcome! I think you made some great choices there - no matter how much farther down the rabbit-hole you go, those will always be good, versatile boards.

My first set of caps around 5 years ago were TaiHao, and I actually love them. While I wasn’t fond of how they sounded with the random blue clickies I had at the time and kind of forgot about them, I’ve recently discovered that I really like them with tactile and linear switches.

I think I know what you mean about the Rosewill - one of my favorite sounding boards is a stock Filco with their thin stock caps and standard Cherry switches. I can’t still say the same about the feel, though…

Welcome! Glad to have you with us. And yeah… I’m on my 4th board now, in my first year. Welcome to the hobby!

Do you think if we pester Yamaha enough, they’ll build us a keyboard that’s been audio tuned?

After two thousand, I am wondering if I should stop the accounting part. What color was that door I opened?