I’m a bit of a Northgate Omnikey fanboy. 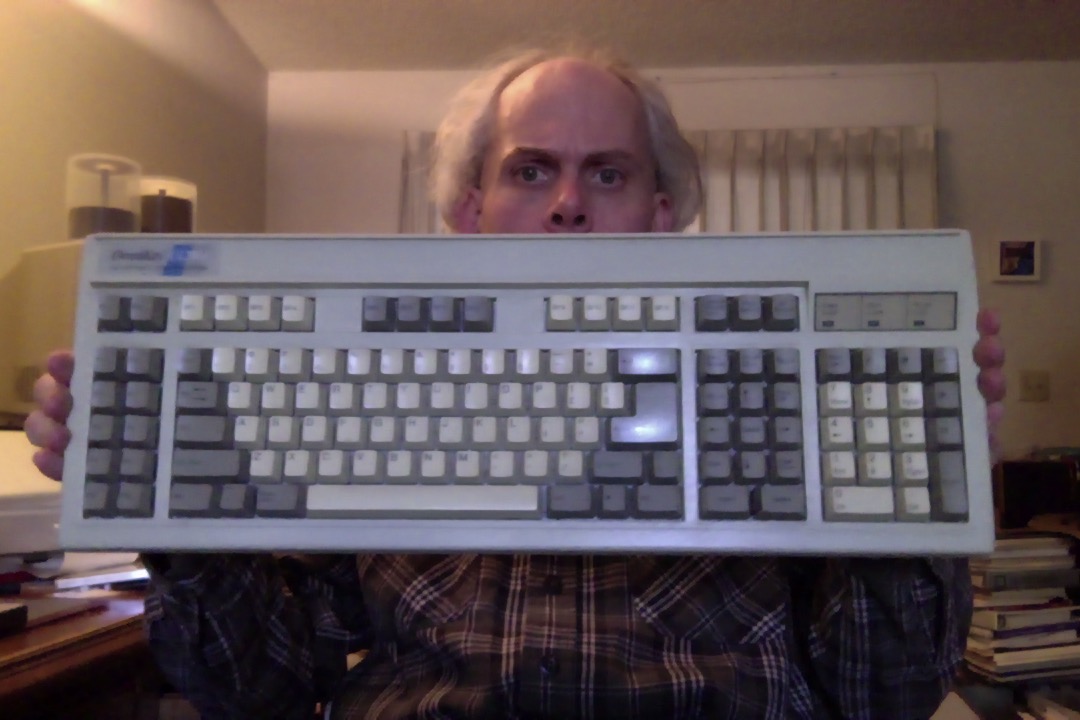 My story. Learned to type on Model 33 Teletype. Carried on with Apple ][ Plus, HP 2645, a variety of HP and other keyboards, got the Emacs in my fingers (but also used EDIT/3000, TDP, QUAD, and something called “VOODOO” on HP 3000) and then in about 1994 got moved to doing Windows driver development so got a PC on my desk. Figured out how to switch Control and CapsLock in MS-DOS and Windows but not in Soft-ICE/W, so spent some months porting a TCP/IP stack to a Windows VxD using an Emacs-like editor and Watcom C. Noticed some left-hand pain which I put down to reaching for the Control key down there and started looking around. Got hold of a Northgate Omnikey and have been using those for PCs since, but for one stretch where an officemate objected to the sound of clicky keys and I got another PC keyboard built on a PC board and cut-and-jumpered it to switch Control and CapsLock.

Got into Macs around 2001 and am mostly happy with their ability to switch Control and CapsLock in System Preferences. Then in 2005 got a new iMac with the Apple Pro Keyboard and watched my typo rate go through the roof. Got a Matias TactilePro (original), thinking maybe I needed some tactile or audible feedback, which I still use (and have worn some of the printed key labels off).

Have been OK on MacBook “chiclet” keyboards and have tried a “chiclet” Apple Pro Keyboard with success.

I’ve also tried a few other things, some good, some horrible.

Lessons learned: Control must be to the left of A, a little bit of tactile feedback helps, curved boards (like the mid-2000s Apple keyboard) get in my way, and I like clicky but don’t need it.

Hey, welcome to the community @hairyvisionary!

Man, I love the function keys offset to the left, that is a serious board right there.
Welcome.

There are at least three major hardware designs. 1989-1990 there is a keyboard PC board and separate controller PC board with connector(s) (one or three), configuration switches, and reset pushbutton out the back. (There are a couple variants of this, one with double-sided controller PC board, the other with single-sided controller PC board.) 1991-1995 there is a single keyboard-and-controller single-sided PC board with a single connector out the back and configuration and reset pushbutton out the top under the Northgate logo plate (it flips up). Last generation ca. 1996 is the “programmable” Omnikey with Windows keys. The “programmable” firmware has bugs that make the keyboard lock up once in a while and the “fix” is to clip out the flash chip used to store the “programming”.

The two-board variants are kinda interesting in that the firmware is in an external EPROM. After that Northgate went to mask-programmed firmware inside the microcontroller.

What I haven’t got a look inside of are the earlier gold-logo-plate Omnikeys. I think there is an earlier pre-“Omnikey” Northgate keyboard too.

Poking round here I found @Blindassassin111 tried to do a group buy of Omnikey PC boards and didn’t have any takers. In some ways I am not surprised, the PC board isn’t usually a problem, the problem is the key switches having got crudded up inside.

I’m a bit of a Northgate Omnikey fanboy.

Northgate Omnikeys are amazing keyboards! I love my northgates so much I actually ended up with 3

. Although one of mine is the Northgate Omni Evoluction, which was a really cool split board with a trackpad that they put out. Otherwise I have a standard fullsized and the full sized with the F cluster on the left side. Special note about that one that I have is that it was manufactured with doubleshot Dvorak keycaps which is absolutely amazing as a Dvorak typist :D.

Have you ever contacted Bob Tibbets of Northgate Keyboard Repair? He’s an absolute wealth of knowledge on the boards and was the one who taught me to fix my programmable fullsized by simply resetting and clipping the programming flash chip.

My first was one of the programmables that I bought when building my first FreeBSD box in late 1996. Every couple months it would lock up hard and I had to reset it and put the Control key back to the left of A.

Cleaned out former employer’s Omnikey Ultras (1991-1995) sometime in the later 1990s (they had been bought for a team of rockstars who left after their project lost its lustre; to be fair their project did ship three releases, I used it and liked it, and it included that TCP/IP stack I worked on in the box too), and picked up others when I could, so have about 20 (mix of Ultra, Plus, others, no Evolutions) and have lately been thinking this is more than a lifetime supply and doing some cleaning and testing and dumping of firmware and thinking about what I really want to keep. Currently leaning toward keeping the ones with firmware in EPROM.

I had also cleaned and tested some when I got them, and switched away from the “programmable” one to one that switched Control and CapsLock around with a switch. So I got good at cleaning them out before Bob got going. Way back in the not-so-late 1990s there was someone who had put together a web-based Omnikey forum (long gone) and the designer (with Interfatron-BBC) turned up and wrote a bit about them. He’s the one who wrote that there was no fix for the programmable Omnikeys other than removing the flash chip. I am thinking the Interfatron-BBC guy also said the CVT Avant Stellar had fixed firmware, but I have since read the same “remove the flash chip” fix for those.