I subscribe to the Home Lab subreddit and see a lot of interesting, fun labs. I am going to be setting up a lab here in the next week or two and am hoping to figure out what I can use all of it for.
I have a 42u rack that I am going to be setting up in the garage as well an ECU to keep things at a manageable temp.
I will be installing the two Dell servers I have had sitting for a while and will more than likely be running a VM farm as well as a shared storage pool for the family.
Next is a Cisco 6509 chassis, Cisco wireless controller, and three to four Cisco AP’s. Not sure what I am going to do with all that capacity but my goal is to set up an enterprise grade network, to help me become more efficient in the Cisco environment, which will hopefully result in become a better Network Admin.
I will update with pictures once I get things set up and cable management in place. Let see you home labs and what you utilize it for. Who knows, maybe your setup will inspire others!

I’ve always thought it would be cool to have a rack of like servers and stuff, but like I dunno what I would actually do with it. Like I have no use for virtual machines, the only thing I could see would be hosting my website but that’s so cheap anymore I don’t think it’s even worth it. I have a janky ubiquiti setup for my networking with a wired router and single access point, it covers plenty of my house to not need more (and it’s an old house, we don’t have cables run to any rooms anyway). I did have a server for monitoring some data for a high altitude ballooning project I did at one point, but it ran on a raspberry pi which used almost no power compared to a real server. That’s the biggest thing to me, it just seems like it would burn a ton of power and not get me much.

What are you planning to do with the servers?

My home lab consists of a PC that I use to access the various cloud providers. I suppose if I were to construct a lab at home now it would be more focused on building various electronic projects. Perhaps I should get off my lazy butt and do such a thing. What are the specs of servers you have?

Here’s a lengthy list of applications/services you can host in your new home lab:

A list of Free Software network services and web applications which can be hosted locally. Selfhosting is the process of hosting and managing applications instead of renting from Software-as-a-Serv... 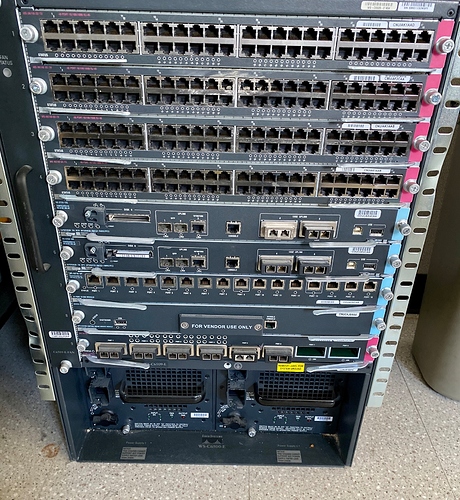 I don’t have anything as large as @SargentRedbeard (that 6509 chassis will use more power than my whole office), but I do have a small home lab, mostly for building and testing stuff in Docker, storing files, etc. I’m up to about 25TB of space now, mostly full of movies and tv shows. I like messing around with monitoring apps and time series databases, so I play around with stuff like Grafana and InfluxDB a fair amount as well. I used to have a lot more stuff in my little 12U rack than I do now, but I still get a lot of enjoyment out of it.

I too am a r/homelab subscriber.

I have a file server running FreeNAS that I built using http://serverbuilds.net. I backup the household computers on this but also have a VM that runs one of my 2 Piholes.

I have a Raspberry Pi 4 running the other Pihole as well as a Celeron NUC that run my home automation on Home Assistant.