So, I get asked maybe 5 times a week how I use my 40s. Mostly by people interested in downsizing, occasionally it’ll crop up from a ‘40s bad hurr durr no one could work on that, they’re for show’ thread, I’ve said this before many many times (and most of this is from a comment I made elsewhere on here) but I thought I’d post so I can just link people when asked!

40% is a calculated exercise in loss for me (I have some 20 or so staggered 40% keyboards), for me it is 100% not about trying to squeeze every key I occasionally use into layers, and conversely about deciding what I can live without. Now what that is depends person to person, it’s inherently use case specific. I myself am a software developer, mostly front end (I use a text editor rather than an ide) and on MacOS for work.

That combination has basically allowed me to cut down to pretty much one layer. Layer 2 contains the punctuation that won’t fit and that’s basically it. I don’t miss the f keys and don’t program them (even on 60 thanks to my os), I don’t use the nav block so it ain’t there.

Now as I said. This is personal. My development style allows for this, most don’t, but it’s about finding what you can live without, not finding some ingenious method of conveniently squeezing 108 keys onto 40. Anyone thinking about doing that I’d honestly advise against 40%.

But to speak to the advantages, 40% allows me to hit every key I need without ever leaving the home row. I have zero lateral or horizontal movement while typing (or at least I would if I could type, either way my wrist movement is heavily reduced). For me, that’s huge. I type quicker and more comfortably, with less fatigue (I type a lot, I’m at my desk 10 hours a day and work from home so even when not developing there’s a huge amount of text based Comms).

Here’s my current sick and twisted layout (I change them around quite a bit, but when I do I flash all my 40’s, otherwise hella confusing): 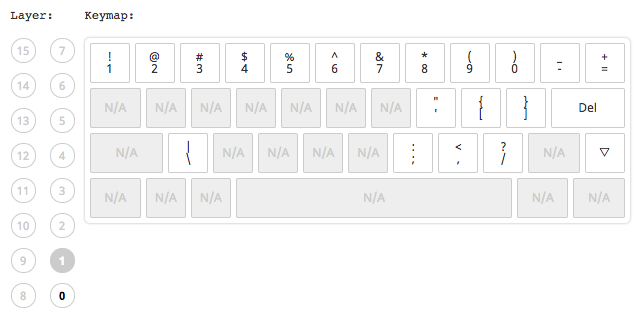 But as I say - this is not a ‘This is the best layout, use it’ kind of deal. This is what works for me, my workflow and my use case. To use 40% you need to figure out how best you can use 40%. There’s no magic bullet, and to be frank, I would fully expect 50% of people would never be able to adapt simply due to the fact that their workflow demands too much from the layout.

Really interesting, thanks for sharing that

I’m also curious about the layout you use on you ‘hhkb-style’ 40%, like the Daisy!

On the Daisy my bottom row is os, alt, space, ctrl - I’m on Mac-os, I need ctrl mapped, but really only for ctrl based terminal shortcuts. I then have layer 1 alt set to alt gr.

Great write-up. Given this information, I know that 60% will be the smallest layout I can handle. I guess that saves me money

Thanks! Can’t wait to try that on my incoming Daisy

But where are arrows located? Or do you use vim style navigation?

I actually, when I use them which isn’t often, use a 5 key macro pad for arrows. I used to use them on layer 2 (space as tap hold space/layer 2) WASD, I moved them and my media keys to the macro less as a symptom of 40 and more as a result of having too many keyboards…

I tend to use at least 2 different boards and I found those were always the keys I lost when doing so.

I like this post. I think many people who use 40% aren’t particularly great in explaining their use other than “it works for me,” because I think people are more interested in how it works for a particular person because they might have similar enough uses.

Posts like this want me to at least give staggered 40%s another shot. Maybe I could have done my keymapping better for staggered 40% dvorak based off the work I do. Maybe I didn’t give it enough time.

But the only question is… which one?

If there’s one thing I’ve had experience with in this community it’s answering this question. And unfortunately I never give the answer that people want which is ‘it’ll change your life!’.

Mechmini2, amj40 or chicory for a reasonable first punt in GB ATM. If you need 45 then jd45 as it stands. There’s a couple of 45s coming up though…

Is the N/A dead keys or transparent?

Since we’re posting 40% layouts, I have a minivan and a layout that works for me. Everything marked with a ‘/’ can be both keys based on holding vs tap.

This is the base layer: I find it has all the primary keys I want to access and in predictable places. Enter took a minute to get used to, but I found I loved it quicker than I expected. Anything beyond these keys is a reach and my goal with a 40% was to reduce reaching.

This is my Numbers layer. Its activated by holding enter with my thumb so it doesn’t feel very troublesome to access. I also find the horizontal numrow to be easier to navigate correctly since it expands through all the 1u keys and is directly above the home row.

This is my symbols layer. It’s activated by holding space. I swap the positive math symbols with the negative math symbols since I prefer to hit those keys on the middle row for reach related reasons. It makes grabbing parenthesis super intuitive and having the math laid out like that actually makes typing those symbols feel way smoother than searching for them shifted on the number row. The WIN key activates a second set of layers that are windows formated with windows specific shortcuts added to the secondary layers.