How often does KBDFans restock?

How often does KBDFans restock their inventory? I was just about to order the TOFU65 kit and the next day it was sold out. I have everything for my first build except the case/PCB. I mean… I could buy the pieces off of their website individually as well. I’m assuming they would be the same as if I bought the kit, maybe just a little more expensive… 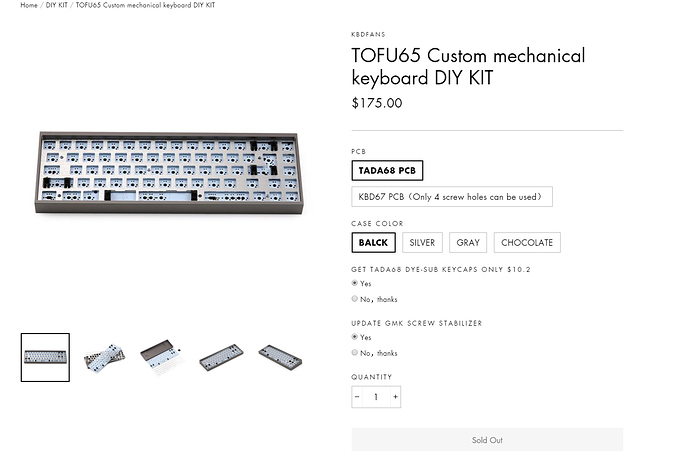 Also, is there any other 65% boards/cases that you might recommend?

It depends on the specific product in question, you oculd try to get an answer in their discord, but if they’re OOS on an aluminum case it’s probably a couple months turnaround as they seem to do them in runs.

The TOFU65 case is arguable nicer than the stock TADA68 high profile aluminum one (which still isn’t bad for its cost).

Honestly, I think the KBD67 is a better option than either. The PCB orients the switch in a south facing fashion which avoids cherry keycaps clacking on the switchtop housings, is more easily compatible with QMK, and in general is more reliable (I’ve had a TADA68 pcb die and on reddit it’s a common question). The 67 is also just a more premium feeling and looking board, with a nicer mounting method, than the tray mount Tada.

Edit: Just saw you can get the TOFU65 with the kbd67’s PCB, which may be a good way to go as well

Edit2: maybe that’s not a great option as the KBD65 layout options seems to imply you need to have that blocker by the arrow keys

I’m glad you told me about the quality in both the TADA68 & the KBD67. I’m assuming the KBD67 is the same PCB as the KBD65 you can buy separately. In which case it’s not available. I’ll have to ask in discord how long it might be.

I wanted a brown Tofu 60% and when I went to buy it KBDFans said out of stock. So I hopped over to Amazon.com where they have a storefront and was able to buy it no problem. Felt strange that they had that much of a disconnect but I’m glad I was able to get what I wanted.

Good to know they are vending elsewhere like Amazon. To bad they don’t have the TOFU68 there. The case is in stock on KBDFans’s site, but not sure when the KBD65 will be restocked. I couldn’t get much of a response on their discord.