Allow me to introduce you to the coolest keyset of the season: DSA Frost!

This name may ring a bell for some of the more seasoned members of the community, as it was my very first IC. In the 2 years since I have used my experience from GMK 9009 and Modern Dolch, and have completely redone the set. I’ve been planning to re-release this set for a while, but I figured there was no better time than now with winter right around the corner!

As the name might suggest, this set is inspired by those cold winter days. The combo of sky blue modifiers and snow white alphas makes for the set’s minimal yet fresh look. Add to this some blue-grey accents representing those breathtaking mountain peaks, and you’ve got a set that will freshen up any board!

Another benefit of designing a keyset in DSA profile is the great flexibility with which you can design kits. As you can see, I didn’t opt to go with one big and expensive base kit. Splitting up the kits into smaller segments means you can customize your order to your needs. This way, you won’t be paying for keys you don’t need but people with more exotic layouts can still get all keys to fit their boards. 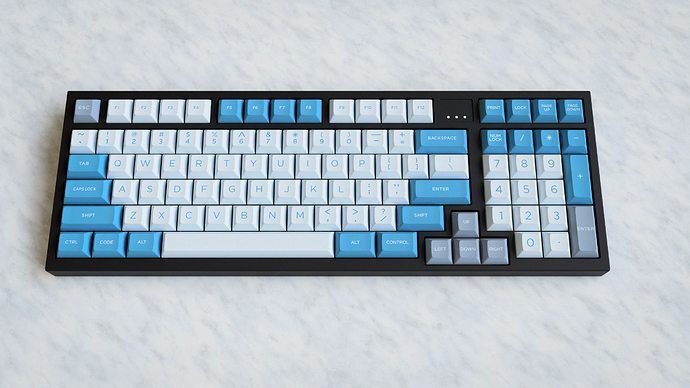 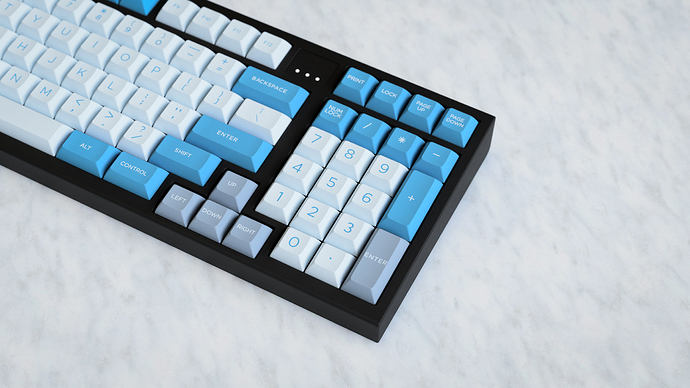 If you’re interested in this keyset please consider filling in this Google form, it really help a lot to see which kits will hit MOQ

While I can see the similarities since they’re both using very cool colours, I don’t think it’s really fair to say this is a “copycat” considering the set was made more than a year before Shoko and the fact that there are so many keysets out there right now that there almost always is one that kinda looks like it

Not accusing of copying, I’m just noting the first thing that came to mind, so sorry if it came as offensive D:
Best of luck with the IC!

This looks great!
As an ortho fanboy, I would love an ortho modifier pack with all 1u mods rather than picking up the 40% and specialty kit, but I think I’m a fringe case.

Haha no offense taken, thanks!

I tried to avoid including duplicate keys in kits, but considering DSA is probably most popular with 40%/ortho users this might be worth looking into! Thanks for the feedback!

seems too close to seafoam to me

I really like it. And I love that it’s an actual white, and not a yellowish or cream type white. I’ll be very interested to see pricing on the GB. Cheers!

I thought dyesub only worked with colors darker than the background?

Yes, but reverse dye sub is possible. Then the cap is the colour of the legend, and the final cap colour is applied via dye sub (instead of applying the legend via dye sub).

Looks good! Im curious about what manufacturer you have in mind, since you mentioned thick pbt reverse dyesub. Maybe Keyreative?

Wow, I didn’t know that, it’s pretty cool! But isn’t there an increased risk that the colour might get inconsistent with this technique?

This has not been an issue on previous sets, but if possible I’ll try and get some samples of this before the GB to make sure