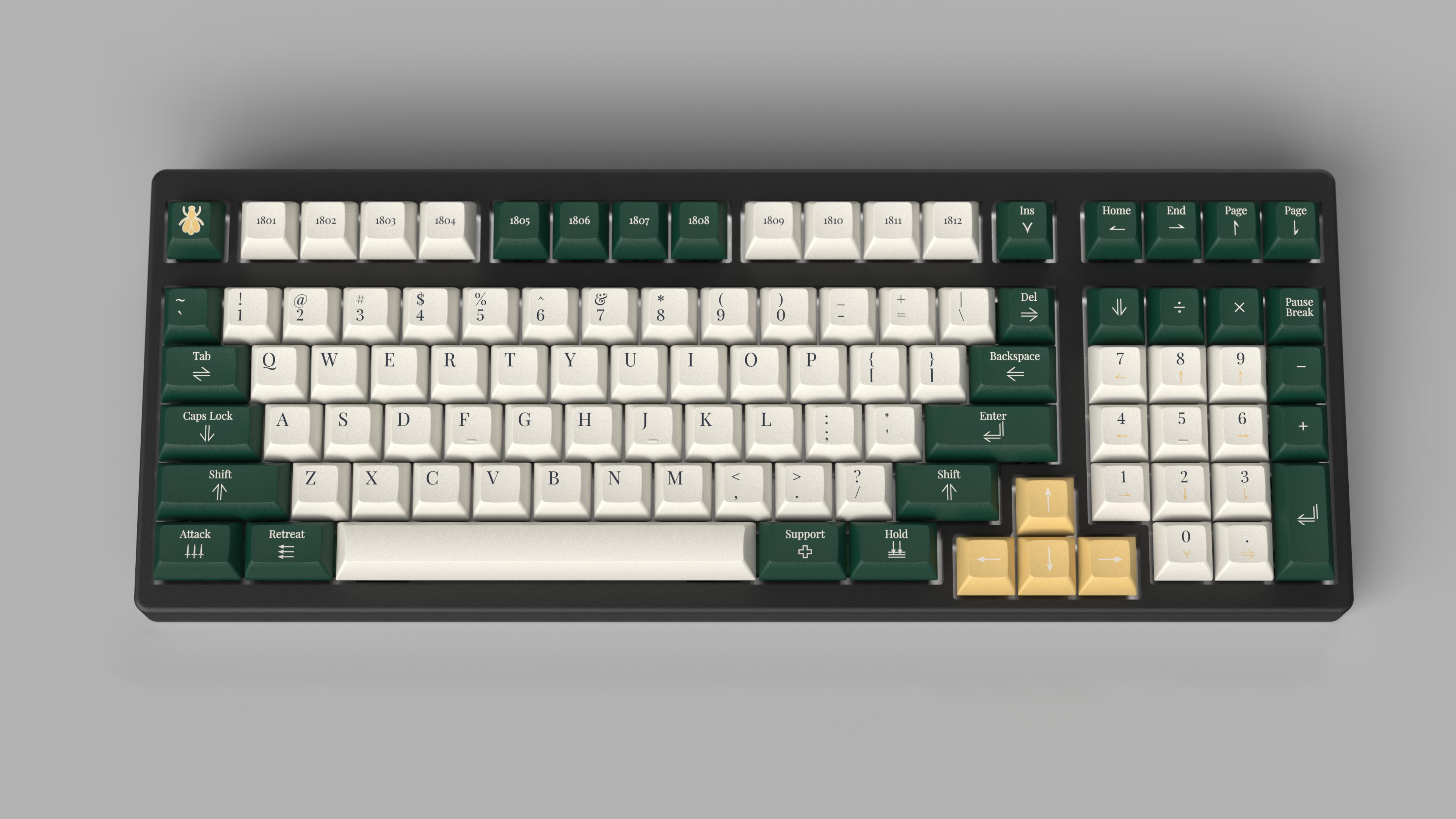 On the Ninth of November, 1799 (18 Brumaire in the Revolutionary calendar), a coup d’etat overthrew the French Directorate and replaced it with a new government: a Consulate to be led by General Napoleon Bonaparte. Just a few short years later, he would be crowned Emperor.

To say his rise to power ruffled a few feathers across Europe would be a gross understatement. While he is credited with bringing about positive reforms to the legal and governmental systems of France, his legacy is one tainted by costly, bloody wars across the continent.

Those early decades of the nineteenth century, from Napoleon’s rise to his death, roughly mark the Napoleonic Period, an era that left indelible marks upon the face of Europe and the world.

KAT Napoleonic is a keycap set in the KAT profile that explores the history and artistic depictions of the Napoleonic Period. 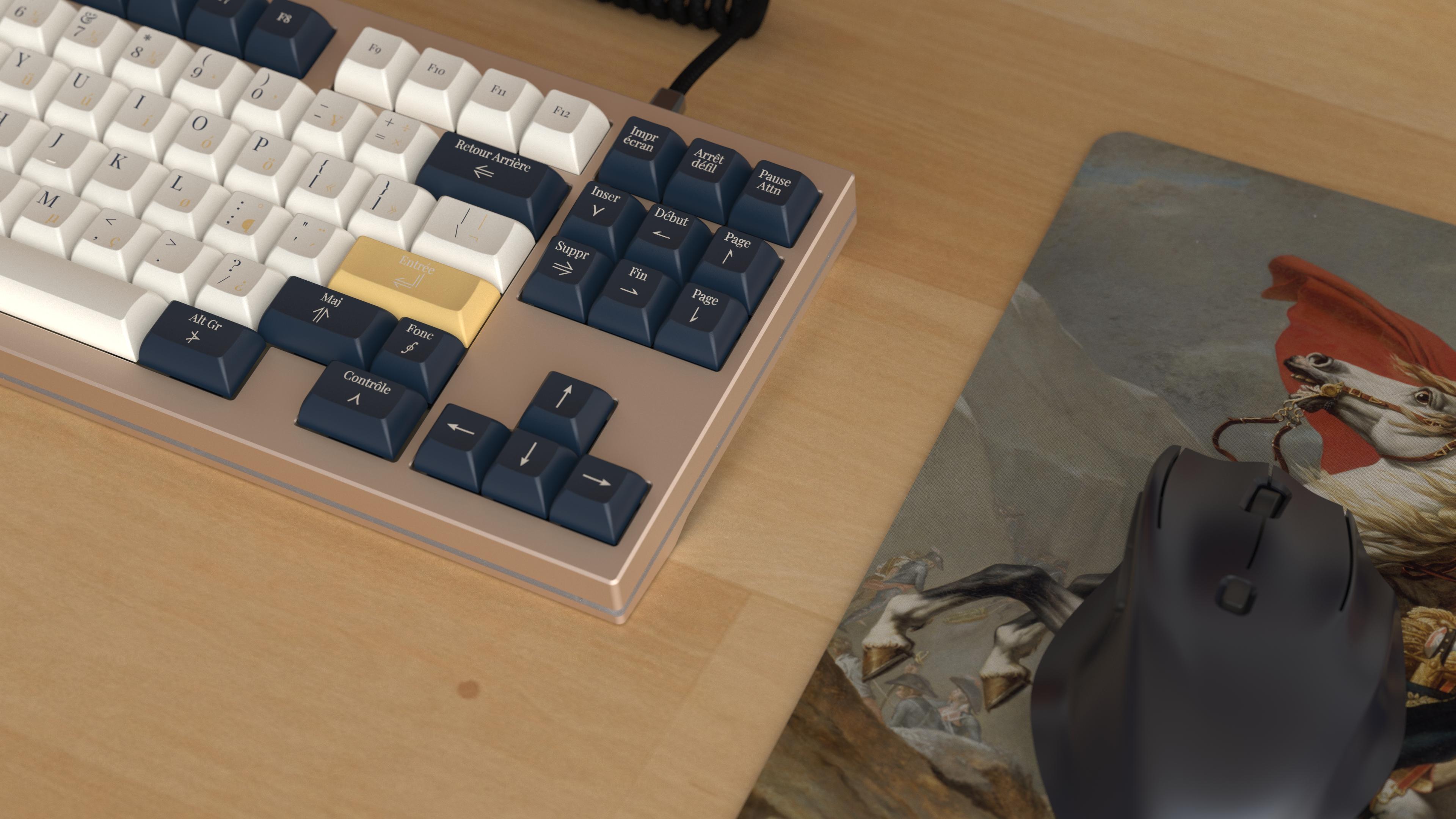 KAT Napoleonic utilizes a modified form of Playfair Display for most of its alpha keys and legend text. It is a serif-based typeface (uncommon in keycaps), and it is inspired by the Transitional and Neoclassical typefaces of the nineteenth century: Baskerville, Bodoni, and Didot.

Because of the global nature of Napoleon’s impact on history, a primary goal for KAT Napoleonic has always been wide localization support. While it may not always be practical for manufacturers to support a wider array of languages and layouts in a cost-effective manner, the KAT profile does provide that flexibility.

While this keyset cannot feasibly provide support for every language worldwide, KAT Napoleonic supports more than twenty-one locales in base alpha kits. Kits available include many that are rarely (if ever) seen in the Mechanical Keyboard hobby: Swiss, BÉPO, South Slavic, Tamil, Cherokee, and Canadian French.

KAT Napoleonic’s modifier keys come in three “uniforms” of color, each inspired by the military uniforms of the era, with particular attention to the Battle of Austerlitz (1805). Austerlitz was a clash of three empires: France, Russia, and Austria. For KAT Napoleonic, you are likewise given a choice of three uniforms: French Indigo, Russian Green, and Austrian White.

Read more about the Colors & Uniforms on Wordpress.

Only a subset of renders are shown here (to keep the page from taking forever to load).
Please visit the Wordpress site to view all renders in full resolution. Alternatively, check out the Renders album on imgur. 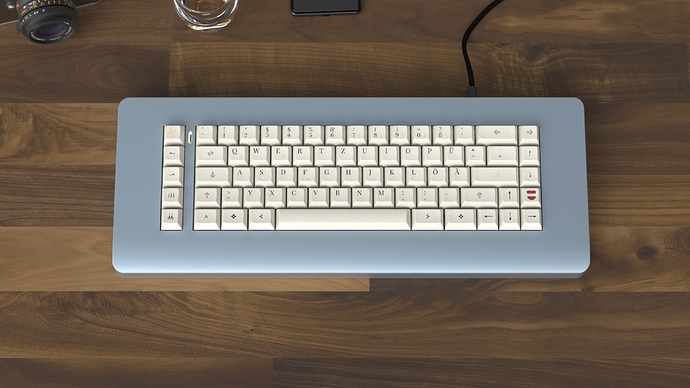 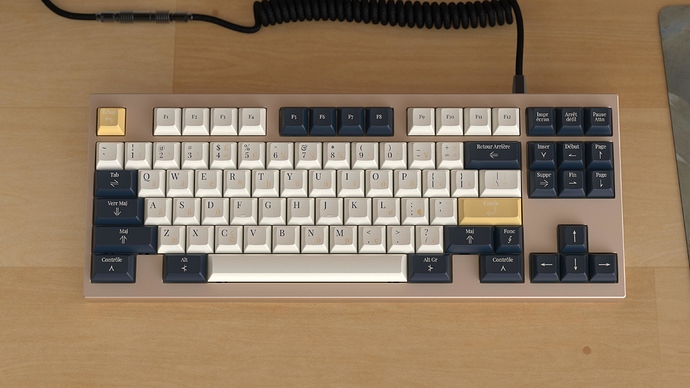 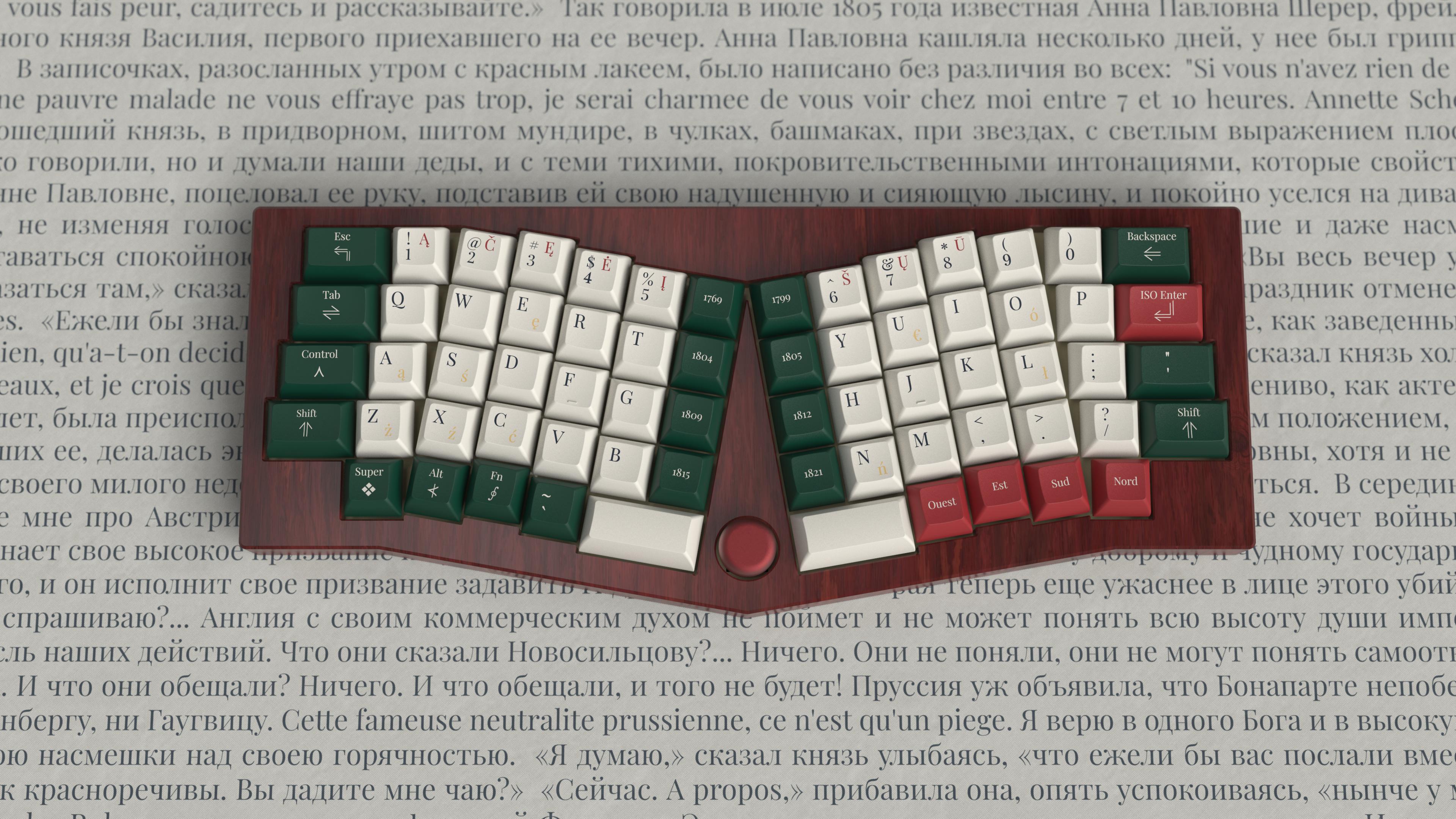 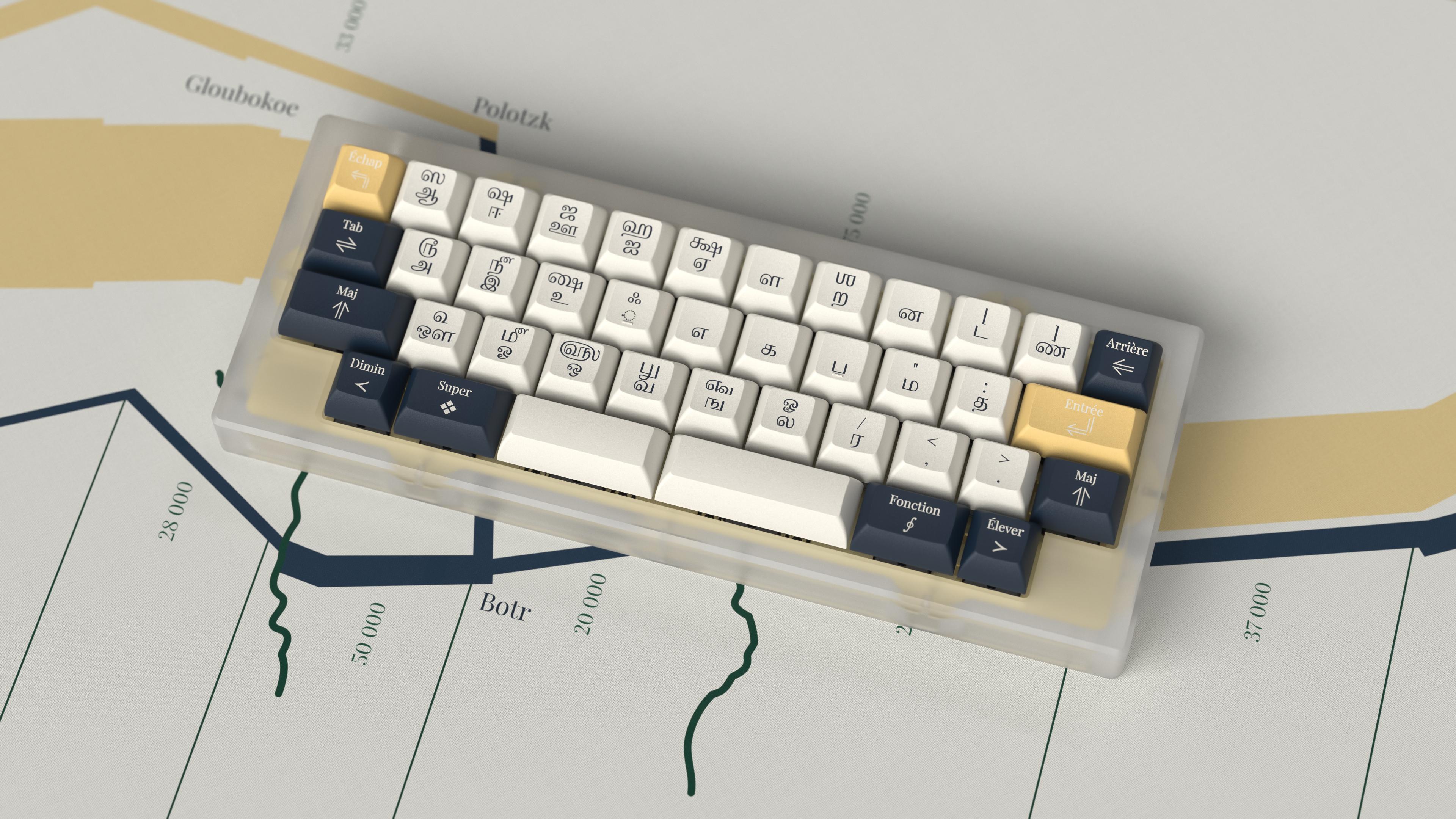 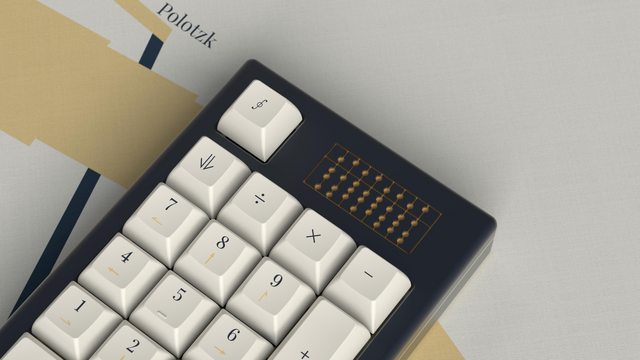 As is typical for KAT, customers will need to choose a selection of “kits” that together will cover their chosen keyboard(s). For KAT Napoleonic, kits are broken into three major categories:

There are 21 different base Alpha kits currently planned. This list is not final, and some locales may be removed, updated, or added based on the results of the Interest Check survey.

Alpha kits that provide standard US QWERTY characters either in legends or sublegends are noted in bold in the rightmost column.

Except where noted, all Alpha kits use Windows 10 as the basis for all legends. Not all characters produced by AltGr or Shift+AltGr are provided in sublegends, with some omitted to keep kit sizes and prices from ballooning while maintaining compatibility.

The latest images are currently provided in this album:
KAT Napoleonic Alpha Kits

Some boards require one of the additional Miscellaneous Kits (e.g. Spacebars) for complete coverage. See the shopping list for examples.

As has been noted several times, complete information about this keyset can be found on the KAT Napoleonic Home Page on Wordpress: (https://tinyurl.com/kat-napoleonic).

Colors shown in keyboard renders and diagrams should not be treated as accurate representations of final keycap colors. Manufacturer samples will be checked against physical color decks of the RAL and Pantone standards above. Be aware that some variation is always possible, and these colors are not guaranteed to be exact.

Early concept diagrams for KAT Napoleonic drew comparisons to GMK Rudy by Warrenified. Because the keycap designer community tends to frown on overly-similar colorways, Warrenified was consulted so as to double-check that we were in fact using different colors. 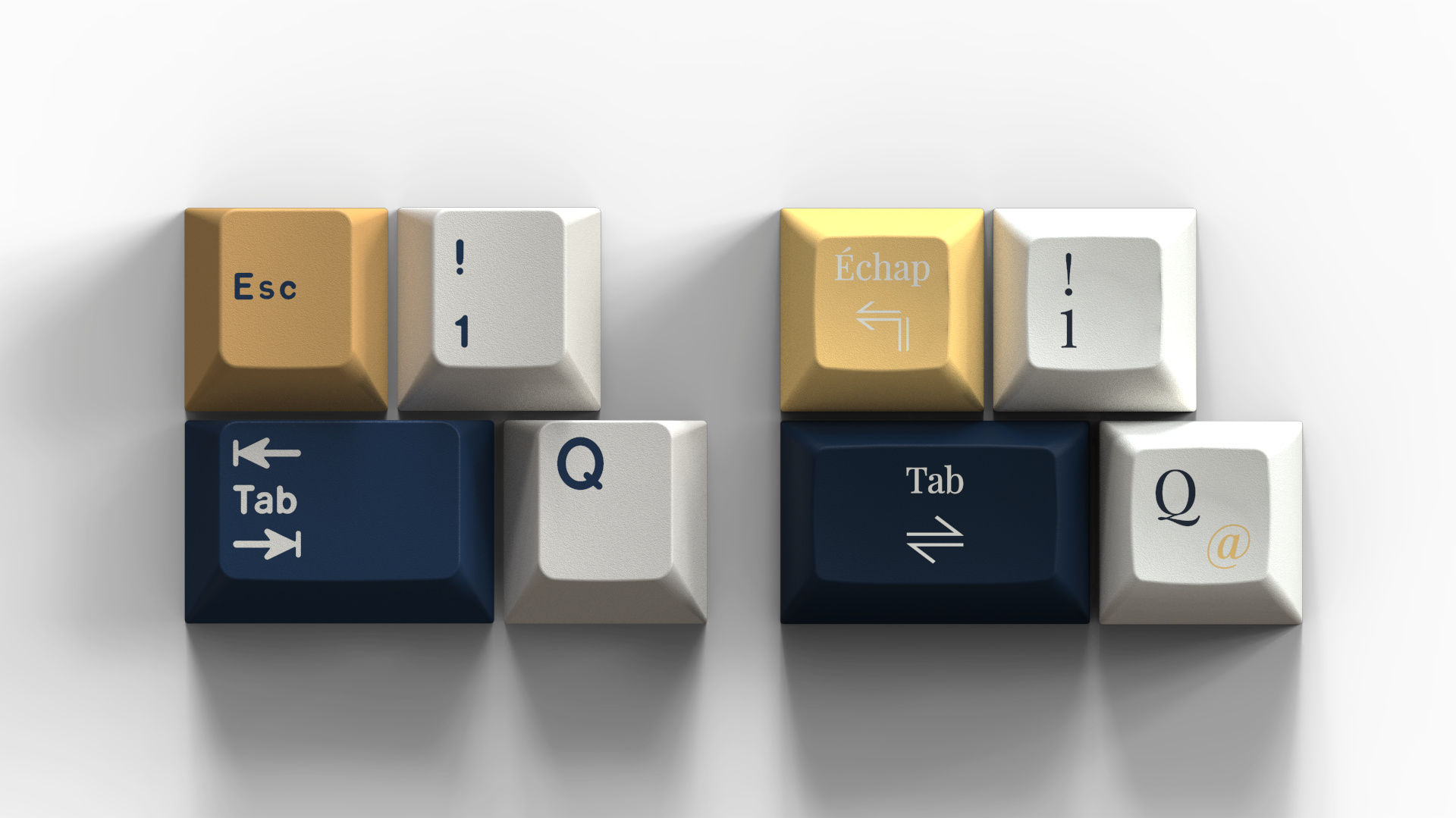 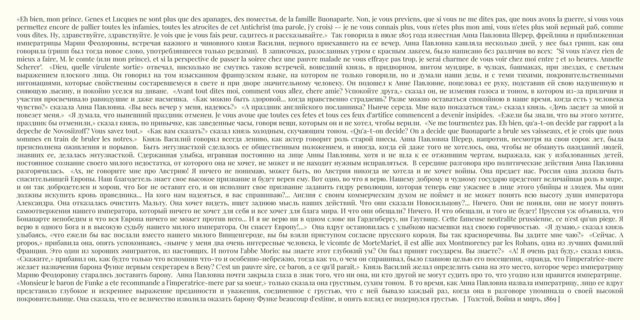 All historical blurbs appearing in kit diagrams are paraphrased from various Wikipedia articles, except for a few selected quotes from:

No intellectual property from the above was used in the design of the actual keycaps or deskmats. Quotes and names used from Jonathan Strange & Mr Norrell in kit diagrams are intended as an homage. No endorsement of KAT Napoleonic by Susanna Clarke or Bloomsbury has been given nor should be implied.

All other designs are copyright 2020 by W. Alex Ronke (a.k.a. NoPunIn10Did). All Rights Reserved.

Lovely. I’m looking forward to this.

My interest in obscure keyboard minutiae has already made me a pretty hot commodity on the dating scene.

Now you’re telling me I can combine that with talking about the intricacies of early nineteenth century European political history? I don’t think anyone’s ready for that level of seduction.

Jokes aside, the amount of thought behind this set is unbelievable…keycaps with a citation section!! Also, I love that your interest in historical accuracy still allows for a couple shout-outs to the return of English magic.

Also, I love that your interest in historical accuracy still allows for a couple shout-outs to the return of English magic.

There are many who serve the Raven King.

We are less than eight weeks from the KAT Napoleonic Group Buy, which starts November 9th. I have new renders and alphas to share, including support for JIS, ANSI-JP, Eurkey, and Latin American Spanish.

The post has been updated with new and revised render images. You can also see these on imgur or on the official KAT Napoleonic site.

Based on survey responses and other feedback, three new kits have been added.

The Austerlitz and João VI alpha kits have been sidelined at this time due to lack of interest.

This week, I have a few short updates to share.

I am happy to announce a collaboration with Divine Studios (Discord link). They’re a newer face in the custom artisan scene, and they specialize in aluminum and titanium keycaps. They will be producing a mould to match KAT R4, and I should have a sample to photograph some time before the GB starts.

I have been in contact with a mat manufacturer that can produce the standard 900x400x4 mm mats with stitched edges. Additionally, they can offer other sizes as well as aluminum mousepads.

The following two designs are planned for the 900x400x4mm deskpads. At least one of them will be made in a smaller size as well (probably 600x300x4 mm).

I am partnering with Keeb Nerd to design official Napoleonic merchandise, including three button-down shirts based on the three colorways: French Indigo, Russian Green, and Austrian White. Samples are en route to my house, and I should be able to get some photos sooner than later! I am also pursuing other types of merchandise like coffee mugs based on the deskmat designs.

Some of these items will become permanent fixtures in Keeb Nerd’s shop, but I’ll be able to share discount codes that are valid during the GB. Those will be announced in my Discord server.

As announced in the NoPunIn10Key Discord last week, as well as on Reddit, I have added what should be the fortieth and and final kit to the KAT Napoleonic product line: British Navy TKL Mods.

The British Navy kit was added as a response to popular demand for Indigo-colored mods using either English or icon-only legends. The British Navy uniform will only be available as a single alternative mods kit. Its contents are pared down as compared to the standard TKL kits and do not offer quite the same compatibility; the price will be lower to reflect this.

Also per popular demand, the Ortho Mods kit in the French Indigo colorway has been updated to use icon-only legends. Additionally, the Doppelkaiser alpha kit (Hungarian & South Slavic Latin) received a minor correction to account for a mislabeled character. 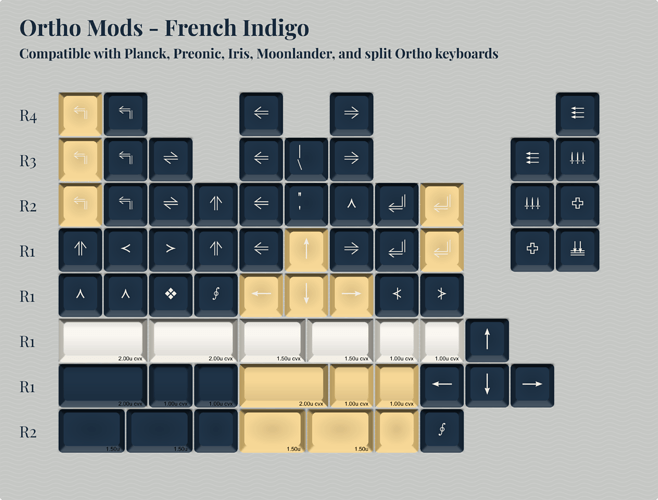