I finally did a few builds on it to get a feel for the quality, toughness, & ease of use. So I figured I’d do a little review for anyone who may be looking into getting one.
First impressions: 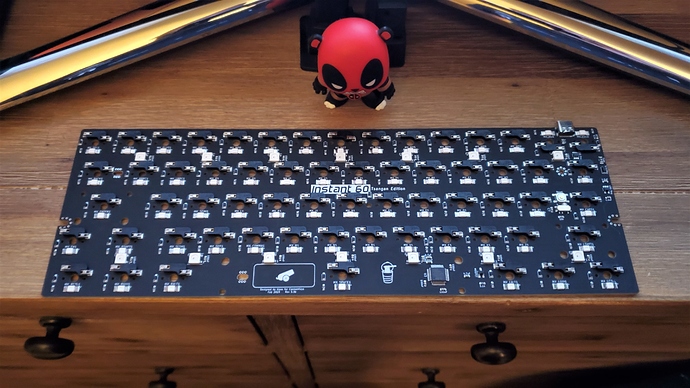 20191213_153538.jpg4032×2268 1.52 MB
Overall a very nice PCB that seems to be well thought out for enthusiasts needs as well as beginners needs. Some of the HS sockets needed touched up with extra solder as a precaution, but those joints could’ve held up fine for all I know. I’m just a stickler for all my PCBs having clean & proper solder joints on all of them. No issues out of the box, all keys registered upon first test, all LEDs functioned properly, & while like I said before I preemptively touched up some joints the soldering was honestly pretty decent out of the box. Probably the biggest draw for me though, was all the switches other than Esc & 1 are designed to properly face north (the USB connector keeps Esc. & 1 from being north facing) a huge plus in my book! 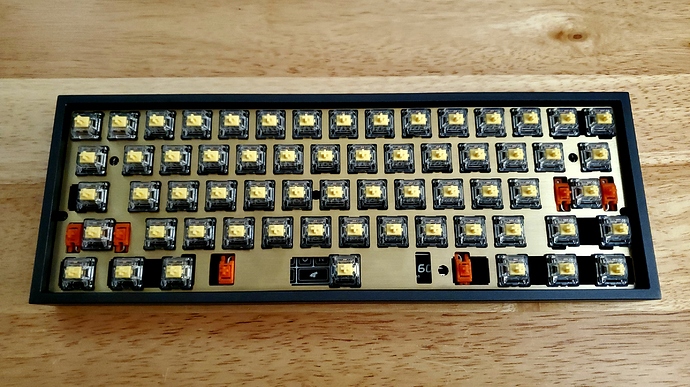 20191220_105910.jpg2851×1603 3.08 MB
Building with it was a breeze. I found popping switches into the plate’s four corners & couple in the center before putting it on the PCB was the easiest way to keep the plate from pushing down when installing the remaining switches. Other than that not much to be said, it’s a HS board, there would have to be something hugely wrong for it to be difficult to build LOL! Also the Instant60 is VIA compatible so programming is just as easy as building!

Conclusion:
While definitely pricey at $60 for either the ANSI or Tsangan one I think the pros of this PCB makes it well worth it. I had been looking for a 60% HS PCB for some time so I could set up a switch test bed that I could actually hook up to a device. The 1UP HS60 caught my eye, but then I realized it was all south facing switches. The HS60 V2 did have north facing switches & check all my boxes but, it was priced at $85 dollars & no VIA compatibility to boot. Not really a huge deal as with us now having the QMK configurator site & the QMK Toolbox app, QMK is easier than ever to use. Although at $85 for a PCB I’d be expecting every top end part & feature to used with it.

So after all the research & thought I put into 60% HS PCBs. I would honestly say the Instant60 is the best out there & best value to make the deal that much better. I’ll definitely be recommending this as the go to 60% HS PCB to anyone who asks me!

Granted it’s only a month later, how is this holding up for you? Tossing around the idea of buying one of these for my next build, but not 100% sure.

Feel as stable as soldered switches? Any issues with the center post getting too close to the sockets?

It’s held up surprisingly well TBH, granted I only have built on it twice though. It does feel just as stable as a soldered build as long as you use PCB mount switches, with just plate mount switches the build is noticeably looser. Not deal breaker loose, but noticeable all the same. I am using it in a Klippe-T without the center post so not sure if it would interfere with the sockets if it were installed. I suspect it wouldn’t though as I can use this PCB in my KBDfans heavy case without issue & the middle standoff doesn’t interfere with the sockets on a KBDfans 5°. Although a socket does hit on one of the ledges by the USB hole of the 5°.

Had mine failing too after few months of use.
Also had an entire column trigger when i hit one of the keys.
Did ask on discord if anyone could help, tried debugging it myself.
I guess it’s not just one hot swap socket, gave it to my dad who is an electrician.

But i think cannonkeys also has the problem that they’re sold out
on those so they cant offer an replacement right now.

But keeping silent is not an solution.

Too bad, because i did like the pcb while it was working
and it offered an nice tsangan layout.

Oof, sorry to hear your guys PCBs failed already! So far mine has been fine, but I’ve only built on it twice so far & have had foam under the PCB in both builds. I will definitely update here if I run into any issues. Wish I had a good fix to tell you, but if you already resoldered the sockets in the offending rows & still got the issues it’s something beyond a popped joint on a socket.

I haven’t had problem with mine either. But then I added extra solder on each socket as I always do with all hot-swap PCBs. As to why I go through the hassle, it’s just a habit of being frugal with trust.

I didn’t retouch every joint on the sockets in mine, but I did go over it & touch up any ones that looked like they did not have enough solder before I installed any switches in mine. Think I’m gonna touch the reaming joints up next time I have it out of the case hearing that from you bud.

I have had issues with hot swap sockets with my original k-type, and I suspect the pressure from inserting switches in the socket will eventually be greater than the force of the solder holding the socket to the pad causing an issue. If you’re constantly swapping switches, I’d highly recommend occasionally checking the pads to make sure they’re all still good to go.

The insertion ratings for hot swap sockets is nice, but they don’t account for the solder and the pads themselves that could give out before you reach the rated insertions.

Hey @Zeimus and @Ibexlord - sorry to hear about your issues.
I just noticed this thread – I don’t frequent keebtalk much (just made an account to respond).

My ticket queue currently doesn’t have an Instant60 related ticket in it. Meaning I don’t have a record of email correspondence from you. I’m not saying this is your fault in any way - at some point in the past, I swapped email providers and I think some tickets were lost in the process (they never reached me or something like that). I know this isn’t a great answer or excuse, but I do want to make this right.

As always, if you don’t receive a response to support tickets within 3 days, feel free to follow up with another email.

I’d love to get these issues sorted out for you.