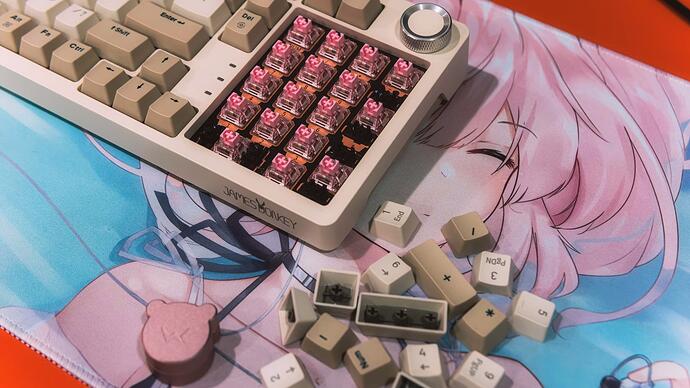 The James Donkey RS2 is a 99-key keyboard that currently retails for $99.99 on Mech Keys. The RS2 was sent to me by Mech Keys in exchange for my written impressions. My board came with Gateron Pro Brown switches. I used the RS2 with a PC running Windows 10.

The RS2 comes in a white cardboard box. Besides the board itself, the package included a user manual, a basic USB-C to USB-A cable, and a rudimentary keycap puller and switch puller. The USB-C termination has a 90° form factor and the cable lacks any kind of fabric sheathing.

The RS2 has a two-tone ABS plastic case with medium bezels and rounded corners. The design is simultaneously retro and modern. The beige color scheme calls to mind early personal computer peripherals, while the case shape is reminiscent of expensive modern custom aluminum keyboard cases. Flourishes include cutouts on the side and center rear which reveal the case’s bottom piece. The rear area features a recessed USB-C port and a button that activates and deactivates the board’s wireless functionality. There are three LED indicators nested between the arrow keys and the Numpad which correspond to Num Lock, Caps Lock, and low power from top to bottom.

The RS2 is lighter than one might expect given the size of the board. The bottom of the board has two nested sets of retractable feet to raise the typing angle. I mostly used the smaller set of these feet while using the RS2. The typing angle was too shallow for me without using either of the feet, but too steep when using the larger set of feet. Both sets of feet have antiskid rubber pads. Three rubber bumpers are located along the bottom edge of the case’s underside. There is also a recessed slot on the bottom of the case which retains the board’s included 2.4 GHz wireless receiver.

The RS2 omits the Insert, Home, End, Page Up, Page, Down, Menu keys and adds a dedicated Calculator key between the Scroll Lock key and the multi-fuction media knob. My one major complaint with the modified layout of the RS2 is the position of the Print Screen (PrtSc) key. To accommodate the knob in the top right-hand corner of the board, PrtSc is located just below the Delete (Del) key. While I am grateful that the RS2 has a dedicated PrtSc key, I would frequently hit the PrtSc when aiming for the Del key.

The keycaps are Doubleshot PBT in OEM profile. The keycap walls are neither thick nor thin. The sharpness of legends is fair-to-good. There are noticeable inconsistencies between the font thicknesses of legends. The RS2’s stabilizers are not as good out of the box as the stabilizers on other pre-built mechanical keyboards I have reviewed in the last year, such as the Epomaker TH80. The spacebar was particularly rattly and required a healthy application of white lithium grease to sound acceptable.

The RS2 is marketed as being a gasket-mounted keyboard. While other reviewers have taken issue with the RS2’s gasket implementation, it is undeniable that the RS2 has a softer, bouncier, and more flexible typing experience than any other keyboard I have tried at its price point.

The RS2 makes use of foam dampening material but largely avoids the characteristic marble-y sound associated with polyurethane foam. There is no case ping either. However, the board does sound mildly hollow. I strongly disliked the Gateron Pro Browns that came with the RS2. While the consistency of the factory lube on the Gateron Pro switches is undoubtedly better than the non-Pro Gateron switches, there were still a sizable number of very scratchy switches out of the box. Moreover, I simply do not enjoy using tactile switches. This is of course completely subjective and a matter of personal preference. Buyers have the option of buying a the RS2 without switches for $69.99.

Thankfully, the RS2 is a hot-swap-capable keyboard. The RS2 also has an FR4 plate, which is conveniently labeled with the locations of keys. This makes reassembly of the board much easier and is something I would love to see on more keyboards. I replaced the Gateron Pro Browns with Akko CS Jelly Pinks, of which I jar-lubed the stems and bag-lubed the springs. The board is moderately loud with both types of switches I tried in it.

The RS2’s knob has defined steps but strikes a good middle ground in terms of the force required to turn it. The knob has a knurled metal band which assists in actuation. This band assists in turning the knob and has a pleasant tactility in use. However, the specific combination of metal and plastic used in the knob results in a somewhat cheap-looking appearance.

The LED backlighting is limited to warm white. This is not competitive with other similarly-priced prebuilts, which nearly all offer RGB with varying opportunities for customization. The brightness of the backlighting is not competitive either. Finally, the LEDs are north-facing, which can create interference with Cherry profile keycaps. The lighting mode options are varied, but I could not locate a working link to any customization software for the RS2. In addition to being stuck with the default lighting modes, the absence of customization software means that rebinding keys and adding additional layers are not possible.

I primarily used the RS2 in wired mode, but I did experiment with the 2.4 GHz mode to some extent. I did not notice a difference in latency between wired and 2.4 GHz modes, even while gaming. I did not test the Bluetooth modes other than to confirm that the RS2 would connect to the generic Bluetooth receiver dongle attached to my PC. The RS2 has a 3000 mAh battery, which translates into several days of sustained use in 2.4 GHz mode without the need for charging. I used the RS2 at my desk 1–1.5 meters from my computer, so I do not have a real sense of the limits of the wireless range either for the Bluetooth or 2.4 GHz modes. While using the 2.4 GHz mode, the RS2 seemed to wake up from an inactive state more or less instantaneously. Several other boards I have tested which needed a few seconds after the initial input to begin registering keystrokes.

There is a lot to like about the James Donkey RS2, but the list of issues is not insubstantial. I like the overall design language of the board, the sound profile, the typing experience, the wireless performance, the knob feeling, and the quality-of-life improvements to the included plate. On the other hand, the sub-par LED backlighting and lack of customization software may be dealbreakers. If you are interested in the RS2 after reading this review, I recommend getting the cheaper barebones kit and supplying your own switches.

The James Donkey RS2 can be purchased below: