I just saw this from an email. 68 dollars for a Gasket mount Keeb? What are your thoughts?

EDIT: I am in no way affiliated with this brand. Just adding this because my wording was a bit sus The KBMG68 double gasket keyboard is only 68 Dollars. With QMK support, back light, and back glows? At the same time as thocky as this? 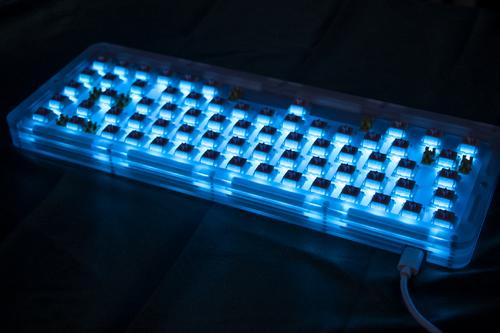 At minimum, I’m glad to see manufacturers trying to lower the cost of features like this.

Stacked acrylic does seem like it would be the cheapest way to execute this - does make me wonder how good it would be. The tall-but-flat form factor is one I probably couldn’t get into, but it seems like it at least has some potential.

Is there a difference between Tray-Mount and Gasket-Mount keebs besides the obvious? I understand that there is a “Gasket” to dampen the sound, but how much of that does it compare?

So this is a really good question with a kind of nebulous answer. “Gasket mount” is a blanket term that’s used for a handful of honestly distinct mounting methods, but they do have stuff in common besides the presence of dampening material.

The biggest thing they all generally share is some kind of edge-mounting; that is, by one way or another, the plate/PCB assembly is supported at the outer edges, as opposed to being supported by standoffs like with a tray mount. Something all the implementations have in common is the elimination of “hot-spots” - or those areas near the standoffs where keys sound and feel different because of the more solid support under them or nearby.

Beyond that is where the different implementations start to sound and feel different from each-other, with some gasket methods introducing significant flex (Keychron Q1) and others simply absorbing some vibrations (GMMK Pro).

Some “gaskets” are big rubber bands or o-rings* (with circular cross-sections), where one big band will stretch around the whole plate/PCB assembly, which is then friction-fit into the case. IIRC the first implementations of this existed as modded tray-mount cases with the stand-offs removed.

*(This is not to be confused with “burger” mount, which uses individual tiny o-rings at the standoffs of a tray-mount case. Both of these methods have been called “o-ring mount” and sometimes both are called “gasket mount” - but these days the method with the small individual o-rings is usually called “burger” with “o-ring” referring to the one big one. Usually.)

Other “gaskets” are strips of foam or silicone, adhered or friction-fit either to the case or to the plate, acting as dampening in a “sandwich mount” scenario, where the top and bottom halves of the case sort of clamp-around the assembly. Some variation of this is what’s most common right now, and basically what’s going on with this KBMG68.

I think the most stretched use of the word “gasket” is with one of my favorite keebs, the KBD67 lite / v3. Trying to name these mounting methods is like trying to keep track of all the music genres in [ current year ], but what it shares with other “gasket” implementations is the “sandwich mount” style of the guts being secured between the top and bottom halves of the case - but rather than pads being squeezed between the case and assembly, the pads extend out from the silicone dampener in between the plate and PCB - so only the pad material is between the case halves, and the assembly is supported from within by it.

So - while you definitely can’t always expect all the same things from different “gasket” iterations, there are a few things you can - namely a more consistent sound and feel when compared with a tray-mount, with some degree of added dampening - whether that’s just a little or a whole bunch depends on the implementation and material composition of the gaskets.

A few more recent kits are made to let you experiment with the mounting, namely the Ikki 68 Aurora - it ships with two different gasket materials to choose from, and has a modular support system for them, so you can elect to remove some of the lower ones for a little bit of added flex.

Wow, thank you for the long reply. I’m pretty interested in burger mounting. Is it effective to the sound? Sounds really simple, and if the impact is noticeable I might give it a try.

Oh definitely. It can make a surprising difference in sound and feel.

It can be tricky, but if you have some longer screws and some broad washers that goes a long way in making it easier.

With normal length screws it can be tough to get the thread started with two o-rings on there, and without washers the orings can slip through the PCB holes.

It has the double-edged sword quality of being very adjustable, but potentially high-maintenance for the same reason; how much you tighten the screws determines how soft or firm the mounting is, but the more loose the screws the more likely they are to back-out from normal use.

The great thing about it is the low cost and how much it really does, which I think balances out the caveats fairly. It’s a low-risk mod you can still get a lot out of.

Every time I see a comment I need to scroll for, I know it’s gonna be @Deadeye. I always love your in-depth analysis. At the risk of stripping the passion out of it, I think you could produce some excellent, in-depth mk blog content. Please keep it up

Many thanks! I really enjoy writing about keebs for whatever reason.

I have a little bit of blog type stuff up on my website, with quite a few more projects in the works.

Adding to the already great deadeye post, this image illustrate well each mounting style and some pros/cons

—
Personally I have a K6 with box Jades (tray mount) and will get an ID67 (integrated plate) and Q2 (gasket) and some cheap linear/tactile switches to try which switch fit each mount better for my use.