I recently got my JTK Royal Alpha set, and while I am still not finished with the build I am already liking it a lot.

I have to write in three languages on a daily basis (two of them using letters like ÅØÆÄÜÖÉß).
So far I am using a Norwegian layout, which makes that task quite easy.

But the us-international layout opens for so many more options.

So, I am wondering if there are some more (available) sets besides Royal Alpha and Griseann that have the us-international sublegends?

I’ve seen pictures of some vintage sets that have the sublegends, but I am afraid they are almost impossible to get. 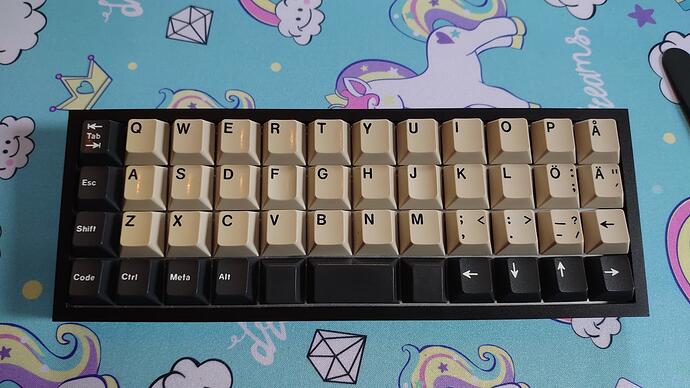 Like the Royal Alpha, with all the sublegends of the US-International layout.

Do international GMK kits cover all the keys you need? If so, many different styles have had those as an option. Currently available would be… Serika, Minimal… That might be it. According to Thocstock anyways.

I don’t know if there is or if it’s needed for norska, but I’m using swerty to manage the problem.

A software keyboard layout for efficient typing in Swedish on US keyboards.

Do international GMK kits cover all the keys you need? If so, many different styles have had those as an option. Currently available would be… Serika , Minimal … That might be it. According to Thocstock anyways.

They do cover the keys, and I already have international kits with keys for all the characters I need.
And as I wrote earlier the Norwegian layout makes writing those extra eight letters quite easy.

I am really explicitly looking for sets with the sublegends according to the official US-INTL layout. Not for sets with single caps for those eight international letters.

I have a Royal Alpha set with those sublegends.
I am looking for other sets (besides Griseann) like it, just in different colors.

I already have several “normal” sets with international letters as single caps.
That’s not what I am looking for.

I think CRP/XMI Tulip is what you want, but not sure

I think CRP/XMI Tulip is what you want, but not sure

CRP Tulip is a very cool set, no doubt.

Got it. It’s quite the specific request, though I’m sure there are other options out there for you. Best of luck.

I just came across WS GR Irish Keycaps on proto[Typist]'s site which may have the sublegends you are looking for.

That is exactly what I am looking for.

Thank you so much.

I did some Google-Fu.

It seems there haven’t been made many sets with us-international sublegends.
A few vintage sets from decades ago, as far as I found out some IBM model M were made with those.
In more recent times kprepublic made two, similar to Royal Alpha.
Imsto made at least two as well, one similar (again) to Royal Alpha and one with blue sublegends.
Then of course the GMK Royal Alpha.

Only very few are currently available. So far I know of three.

CRP Round 5 is offering a US-International set with “Not Irish”: https://store.syruplabs.ca/products/r5-irish-kits

I’m a bit miffed at the exclusion of AltGr in the base kit (it’s included in the additional Icon Mods), considering AltGr is a standard part of the layout, but these will be a nice addition to the list of US-Intl sets.

CRP R5 is also supposed to run on Drop for US customers, but I’m not seeing the listing. Maybe just a matter of time.

That’s another nice entry on the short list of us-international-sublegends-sets.

I agree, it’s really odd and hard to understand why Alt Gr is excluded in the base kit, especially since it’s an elementary key for those sets.

Funny that they call it “Not Irish”

True, but customer service from SyrupLabs is way better IMO. If you’re missing a single key they’ll actually make an effort to make it right instead of telling you to return the entire thing for a refund/replacement.

Almost forgot that ePBT also made a Royal Alpha with us-international sublegends.
Would love to get my hands on those…

A closer look at the 21kb Irish Classic Retro Beige with green sublegends I received yesterday. 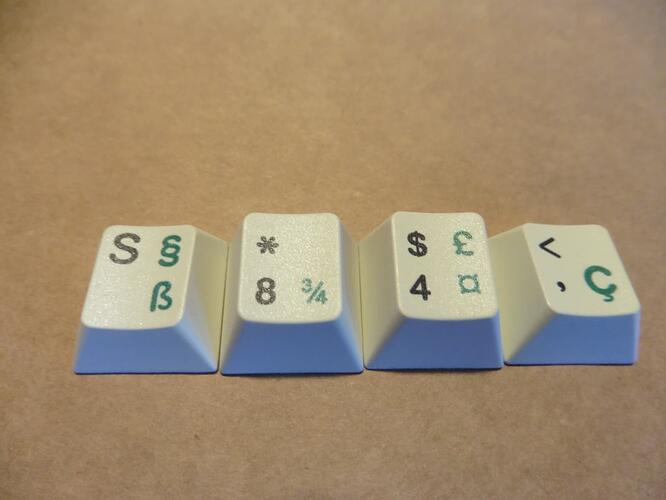 Really thick well-made PBT with the sprue marks pointing towards the inside.

Overall I am really pleased with those caps.