These are relatively new light tactile switches that have recently came out and I’m interested to know the difference in bump characteristics, pretravel, sound, wobble, etc. between these switches. I’ve done some research on these switches and some reviews have said that Pewters and Durock Light Tactiles have the same stem so I’m interested to see the differences there. I also recently ordered some SP Star Meteor Oranges from Aliexpress and they’re coming in the mail and I wonder how the Pewters and Durock Light Tactiles compare to them.

Everything I have read (and some great analysis on here by others), show that Pewters and Durock Light tactiles are the same stem.

Really the only thing that makes Pewters different is the housing composition and the spring weight (58g).

I really like the Pewters, to the point that I have made to boards using them. I was planning on sourcing some more but I think I will try this suggestion:

It seems to me that the easiest way to achieve what the Oxblood would be (although not necessarily what you want or might imagine it would be, since I cannot speak to that which is in your heart) is to buy Durock Light Tactiles (which are promoted using the same stem image as was shared in the Oxblood thread on GH) and spring-swap them with the advertised 16mm 62g TX springs that were to be installed in them. It wouldn’t be the same housing/stem color, but the overall switch would be otherwise …

My biggest turn off about the Light Tactiles is that 65g seems too high for me these days. I have really been enjoying things at either 58g (Pewters) or ~63.5g

I have experience with the switches in question.

The SP Star Meteor Orange is basically an MX Brown. However, I find the tactile characteristics to be relatively good.

The Meteor Orange has good pre-travel, maybe 2mm like Gateron Brown. I find that the tactility subtly ramps up and there is a definite but minimal tactile event. You know when you’ve hit it, which makes it better than some Gaterons I’ve tried.

The annoying part of the Meteor Orange is that it is noisy. It slams almost like it has a long stem, but it doesn’t. The slam seems to be caused by the housing. It slams less if you try other housing materials.

Here are some things people have done to tame the sound on SP Star Meteor Orange:

Apparently, you can lube everything [housing, stem, spring] with 105g0, and it should be okay.

So that is what I’m going to have to investigate. I also recently ordered a package of SP Star Meteor during the AliExpress sale. They are normally about 70 cents each [CDN], but these were 56 cents each.

I ordered 70 Pewters to Canada [the most expensive MX Browns ever] and tested two of them. In fact, they were side-by-side on a keyboard with SP Star Meteor Orange.

However, the comparison is unfair because IMHO the Pewter switches were lubed inconsistently from factory. So if you use them, they might be kind of waxy or gummed up or something. Just not lubed the way a pro would do it.

I took the Pewter stems out and put them in Taro Ball housings, which is a Durock Medium Tactile. There, with 57 G springs, they seemed to perform more to spec. Like light Browns with a noticeable bump.

The Pewter beat Meteor Orange hands down in terms of housing tightness. If you have Pewters that are lubed the way you like, they won’t need as much work for optimization as today’s other light tactiles. Very little wobble.

Despite the good housing fit, the sound was mediocre. It wanted to thock, and the factory lube helped, but it was still kind of higher-pitched than a Cherry housing.

I am not sure how I feel about Durock’s new tactiles.

My problem is with the stem design. For Durock Medium Tactile [what a cumbersome name], they seemed to shrink down the T1 stem and use a less aggressive leaf. The T1 uses Panda/Zealio-style tactility, so it’s all top loaded then it collapses.

You have to be careful when doing this with light springs, and low resistance, because it can become very ‘slammy.’

Pewter stem felt to me like a further scaled-down Medium Tactile stem. Still didn’t have the subtle, pre-travel friendly curve of Cherry and Meteor Orange switches.

So, all-in-all, the Durock tactiles usually have excellent housing fit. They often sound excellent on polycarb plates like on the KBD67 Lite. I question the stem shape. The Pewter leaf felt a little ‘dead’ to me, and not because it’s a light tactile. I’m not sure Durock has its leafs sorted out, although they’re getting there.

If you are looking at these two switches, I also recommend TTC Watermelon Milkshake. It seems to be somewhere in-between a Brown and Ergo-Clear. I find it is too punchy and operating at a higher-than-necessary weight stock, so something like a medium 57 G spring might be better, or even a 65 G Progressive.

Both Meteor Orange and Watermelon Milkshake are likely to need lubing and filming, at least the Durock switches mostly don’t need filming.

Talking about like tactile maybe can have a look this video 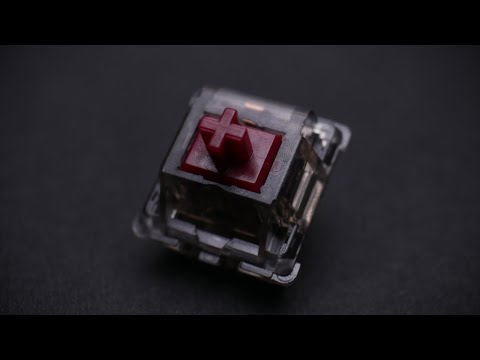 That was my experience with the Pewters. Indefinite tactile bump when compared with Cherry-style. Probably a result of greater roundedness + factory lube.

[I don’t think a light tactile stem needs to be rounded, it can be sharp].

The Pewters do have much tighter housings as mentioned earlier, and better fit in PCBs. This much is true. Sound is not a definite improvement over Cherry MX Brown.

Might be just me but I am pretty happy with the sound & feel of the Pewters. I did properly lube them though, so that could be the difference like you said before. I agree nylon housings have a better sound signature, but properly lubed & on a soft plate/plateless setup the Pewters have a lovely pop to them IMO. Feel wise I find the subtle rounded bump really pleasant. Although in a tactile MX switch I apparently was looking for something even less tactile than a brown. Overall I am very happy with Pewters, but as usual in this hobby, personal preference & all.

Durock tactiles and linears in general sound great on softer plates like polycarb. I can’t go back after using these new switches with polycarb.

Apparently, some of the first MX Browns were in PCB-mount / plateless setups. I don’t think they were supposed to be straightjacketed into metal plates as the only option.

So my SP Star Meteor Orange switches finally arrived and after some modding… I can say they’re a definite contender for a good, light-tactile switch.

I lubed the switches with Triobsys 3203, deskey filmed, and spring swapped with 55g TX springs. The 55g TX springs made the bump ever so slightly rounder but smoother compared to the stock 57g springs which gave the switch a somewhat sharp bump. So depending on what you like, I would either stick with the stock springs for a sharper bump or swap with tx springs for a rounder, slightly smoother-feeling bump. If I were to compare the switch; in terms of tactility it’s between a cherry mx brown and ergo clear and in general… a lighter tactile, smoother ergo clear. I will say, a problem the switch has is that it is a bit noisy. Even after lubing, there’s still some after noise which I believe comes from the leaf. Even so, definitely my new favorite light tactile switch (although there wasn’t really any contenders to begin with).

Some other light tactile switches I may try next are pewters, lighter spring-swapped durock light tactiles as a pewter alternative (since pewters are expensive and always out of stock and they seem to have the same stem), hyperglide browns, or greetech browns.

The Meteor Orange are excellent and slept-on in terms of tactility. It’s light, but it’s present, like an MX Brown should be.

I would not say the tactility is as high as an Ergo Clear, so I agree with you there, but maybe I’ll be able to compare them side-by-side later.

These could be the ‘better Browns’ that certain others are supposed to be, in my opinion, but I think they need to be filmed. Because they have Cherry-level wobble.

It is a noisy one, gonna have to try L + F plus more extreme solutions, including Cherry tops.

I believe I used the 14mm 55g TX (short) springs. When comparing the lengths of the TX spring I used and stock meteor orange spring, they’re the same length.

Pewters looks really interesting - light weight and light tactility. But I guess they are all currently sold out and mechmarket is the only place to look for them?

They seem to be rolling stock. I got some when I don’t think people really knew about them. They were just in-stock. Then there was a GB, and I think they were again in stock for a while.

However I think they are getting popular. There will likely be another GB.

Durock Light Tactiles are similar but not quite the same.

I doubt that they will ever become mainstream popular like those other modern tactile, especially given how unpopular cherry brown is.
Durock light tactile also seems interesting, but 67g is heavier than what I like these days.

You know I’d like to see a test of all these trendy “light tactiles” up against Kailh Pro Purples and Outemu Ice switches.

Are the trendy new guys really that much better? Lubed Pro Purples used to be a favorite of mine, but have been sort of buried and forgotten in the hype train of super tactile switches that came out shortly after they did.

Cherry Brown is only unpopular in the ‘enthusiast’ community. [Which exists in part from dissatisfaction with stock Cherry switches!]

In terms of factory pre-builts, MX Brown is extremely popular. It’s the most mainstream MX tactile. And a ‘blind test’ done months ago had people choosing MX Brown over the boutique tactiles.

Pewters actually became sold out very quickly when word spread that it is a ‘next-level Brown.’ So there is demand for such a thing.

I agree that the 67 G weight of Durock Light Tactile is stupid, but springs are easily replaced.

@rpiguy9907 you are right about Pro Purples. They’re a great Ergo Clear equivalent but with top-mounted tactility. The factory springs are interesting, but sometimes too molasses for me, I’ve recently found 63.5 G Spirit to be a great weight for them, if memory serves.

I believe you can still get Pro Purples on Ali. From what I was seeing, it just seems like you can no longer get them in 5-pin

Flashquark and a couple other vendors have them as well. I’ve been considering ordering a batch just to have them in reserve in case they go out of stock.

I’ve never tried Outemu Ice, but Flashquark has large stock of all Ice variants as well.

Agree, when I said cherry brown are unpopular, I was thinking about the keyboard community. Switches like pewters aren’t going into the pre-built market, so brown being popular in the pre-built world doesn’t mean pewters will too.

The blind test you mentioned shows that people actually like brown. Just sad that many people are buying into the stupid meme.

I found Pewter to be in the medium tactile category, not light. SP Meteor Orange is the best Brown clone: the barely-there bump plus smooth travel.

Using them both side-by-side, Pewters required more force to actuate. There was a more gradual ramp-up with Meteor Orange, which is why I prefer its stem design.