My area (SF Bay) is under lockdown and Polaris hasn’t arrived so I’ve been rebuilding the MasterKeys Pro S RGB my son left behind when he moved out. I’m pretty bad at writing and creating content for build logs but this is something at least.

Desoldering was painful but I learned that frequently lubricating the channel through the tip with White Lithium Grease using a pipe cleaner I had lying around made the job a lot easier. I think Silicon grease is recommended for this use but all I had was Lithium Grease around. If you do the same, make sure to open the window and have a strong fan going. I doubt fumes from burnt lithium grease is healthy.

As stock gaming keyboards go it feels pretty solid but reverb was pretty bad. Applying strips of Silverstone foams horizontally and 5mm Sorbothane struts vertically solved the reverb issue solidly. Photo below shows how the PCB looked with Silverstone strips. I slipped in Sorbothane struts with a tweezer after I put the plate on so they are not in the picture. 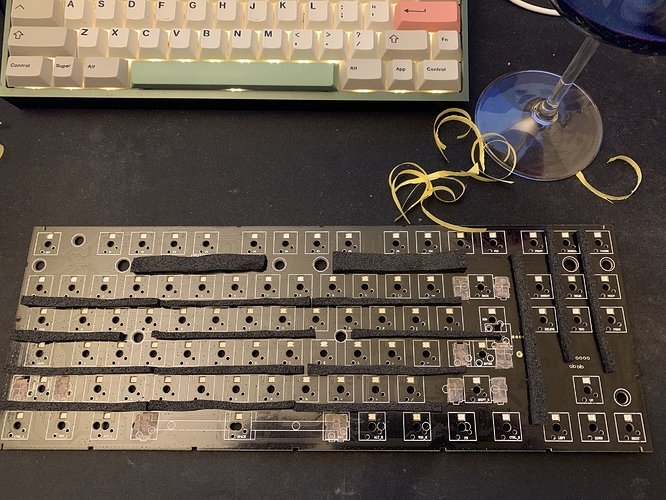 Cherry MX Brown switches were replaced with Aliza housing+UMHWPE stem hybrid lubed with 205g0. Crappy original stabs were replaced with GMK plate mount stabs from Prime Keyboard. They didn’t have 6.25U plate mount stab so I reused the wire from the original stabs with 2U housings. Other than missing one stab housing which I’m told is now being resent, they were perfect. Tight wiggle-free fit and smooth.

The only remaining issue is 6 switches not working from applying too much heat while desoldering. I had to order some 30 AWG wires and a wire stripper for bridging work. No idea where all my old electronic parts went. Very likely thrown out by my wife. Oh, well.

My best wishes to you and your family. Stay safe and healthy. Don’t go around licking keyboards. ;-p

Nice! I’m in the same area and am planning something similar. I ordered a large amount of foam from mkultra several weeks back and was planning to gradually rebuild 4-5 boards with more favorable switches but it looks like I’ll have plenty of time to do it pretty quick whenever the foam shows up.

I’m here to report that under lockdown, lubing does not become any more entertaining.

Yeah. Lubing is getting old and 205g0 now feels like bread and butter.

I may restart work on keyboard layout editor from a year ago. It had two notable features: a ray tracing renderer (half-finished and crappy looking) and a colorway generator that extracts colors from a dropped photo then spits out different combos of the colorway.

Hmm. Maybe it makes more sense to turn this into a bot that generates and posts to Twitter a handful of colorways each day. The bot would pick or accept a work/phrase of the day then use it to find images on the web to extract colors from. Ninja or Coronavirus, for example.

I pm’d you about that keyboard layout editor

Now that my Duck Raven finally showed up I got myself sorted out for some lockdown builds. Gonna build that up with linearized SKCM oranges, move my ALPS64 board back into my ADK64 case, then build up a new 60% build for my Klippe. I’m also planning on ordering a 2nd PCB for a MX build for the Raven & I just got my invoice for a new PCB, PC plate, & O ring for my E6.5. If I can manage to get those 2 things in before a total lockdown I’ll have more to do than I even planned! Although not keeping my hopes up that’ll happen, just happy to have a few builds as it stands.

Oof yeah it was definitely a dull process… I’ve been watching movies while I do it.

Yeah, something interesting on the tv or stereo is a must to lube switches IMHO.

Haha!
I just started lubricating my Gat Yellows and can certify that very fact

I’m going to lube the Cherry MX Browns to see exactly how dull it is. Science!

Dang you really must not have much going on lol