Mixing switch types in one keyboard

Does anyone here have thoughts or experience with mixing key switch types in a single keyboard?

Any prior experiences I can read about? I can’t decide which mod keys should be the same as letters and which not, and it’s hard to decide whether to abandon this experiment.

I’ve done a silent switch for the spacebar, but other than that it never really seemed worth it to me. I like to have the whole board be uniform.

I get bothered by weird things, so just the mere knowledge of having different types of switches or intentionally different weights in the same board would drive me crazy even if I did end up liking the feel. My loss, just can’t bring myself to do it.

Ducky was crazy enough to try it out on a board, but its more for just trying different switches. 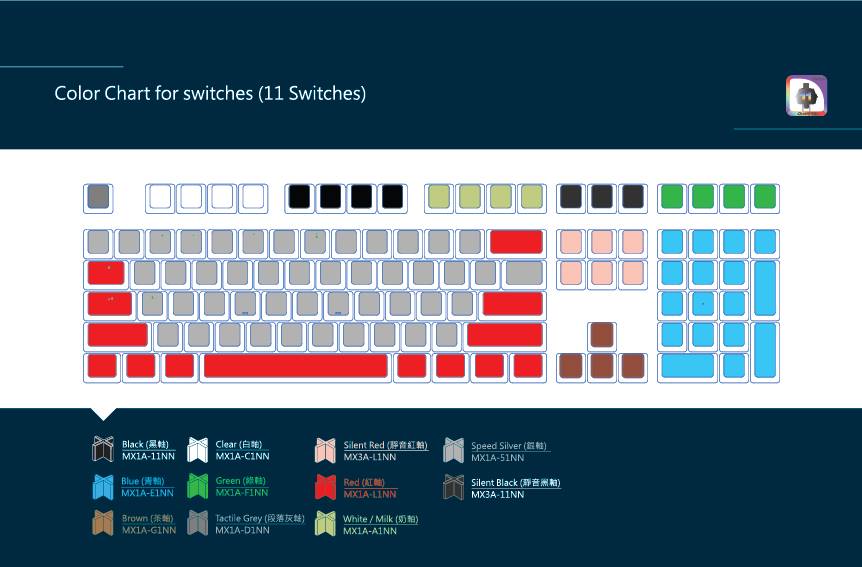 To me, alphas are the only sacred ground. I go with whatever makes it sounds and feels best on the space bar although, unless the switch is overly loud, changing spring weight is sufficient.

With extreme switches, meaning overly tactile, clicky or just noisy due to location and size of the keycap, I go with linear switches on modifiers.

My current 60% keyboard has zilents on the alphas and silent reds on the mods.
While they are both at 45g, I do appreciate the lighter feeling on my pinky fingers when pressing on the reds.

I’m still hopping to beat @AdrianMan on typeracer with this setup. One can dream.

Highly recommend using different linear switches. I like to grab 30 expensive switches for the alphas/space/shift. Then I throw a lightweight, cheap, red linear on the pinky keys, primarily the punctuation keys which are used less frequently and are less likely for you to notice a difference in smoothness. I’ve really liked this because I’ve noticed my pinky doesn’t get fatigued anymore and it really isn’t noticeable in the feels/sound department, its also cheaper.

I also prefer a heavy tactile on keys that I don’t want to press accidentally and aren’t used frequently. Like escape, enter, alt. Then I also run cheap reds on the keys underneath my palms since its hard to reach those keys. Since I use the winkey position in games I find the heavy tactile on alt paired with light linear on winkey has made it 10x easier to use those keys and without accidental activations.

Ducky also did a board that had Cherry clears on the alphas and browns on the mods, which was a lot more practical than the 711.

Personally, I have a board with stock Cherry clears on the alphas and ergo clears on the mods, which I actually like quite a lot.

I think it’s a good idea, but I can never get it right. Reds for mods, of course, but I also prefer light weights on my backspace / enter / space, but then I gain an absurd amount of unwanted volume a lot of the time. I think the switch layout used by /u/Grokodaemon in ONO-SENDAI MATRIX 83 was pretty well done and I might replicate that for my next build.

I always had a hard time with lighter switches. Currently have 60g tx springs in some Gateron Punchy housings on my Unikorn. 60g TX is pretty darn light in reality. I like the idea of them, but in practice I always got frustrated. Then I put a cherry black on my spacebar. It’s now one of my favorite boards. Go figure.

I have a TKL keyboard, the Royal Kludge RK987. I bought a $25 set of PBT double injected key caps for it (non shine through Dolch scheme with white legends) which look fabulous. It’s a keyboard with cherry brown clone switches soldered in it – TTC switches. I was thinking it might be nice to change the BACKSPACE and ENTER keys to cherry red switches because, on my other keyboard with red switches, it feels so much better spamming backspace fast on it. I like typing with the browns but for backspace, since I spam it as fast as I can many times, the red I think would be better. So I did an google search to see if anyone else thought the same thing and I found this page.

I can desolder and solder fine. I have a old nice Hakko soldering station. Just thought I’d ask about it before tearing this thing part and changing it out. I wish I had a PCB with hot swap to try things out.

I remember stumbling across posts of people doing something similar with Zeals - https://www.reddit.com/r/MechanicalKeyboards/comments/8oqbsi/variable_weight_zealio_build/

Not a ton of info on it however. Seems like they just copied the variable weight Topre but using all the weights from Zeal switches.