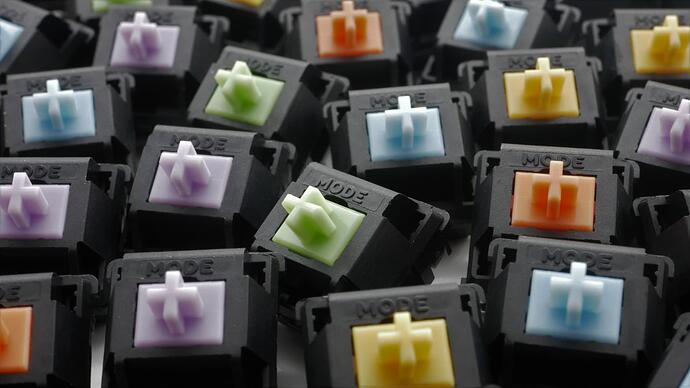 Resulting from a poll on my Instagram and Twitter last month, I’m excited to bring to you a review of MODE’s first new switches in almost 3 years’ time - the MODE Tomorrows. Coming with five different colored stems and factory lubing by Outemu, could these be your next favorite tactiles you’ve been looking for…?

As always, thank you all for the continued love and support even when I’m not nearly as up to pace on my content week in and out. Sometimes life gets busy and maildays here and there may be missed, but I’m definitely not going to miss out on too many for too long.

By coincidence, I just received a sample pack of these yesterday.

They feel like cleaner Browns, but not Browns exactly.

They are a light-medium, as you said, instead of light. And the tactility is like a shallower D-shaped bump from the U4. It’s a lighter U4T, in some respects.

What stands out, to me, is their smoothness, and their cleanness. They are less noisy than any Brown, ever. These are the opposite of some off-putting characteristics of Browns. There’s no noise, no grit.

I wouldn’t mind a “light” version of this. Like, 3G lighter and with some pre-travel. The “Brown” version of this, essentially. The Tomorrow’s are closer to a Durock Medium Tactile than a Brown. Except they absolutely destroy even a lubed Penguin in terms of lacking leaf and spring noises.

Truly a next-gen switch in terms of build quality. A bit heavy at the top: give me the Brown version that’s lighter at the top.

Just getting around to checking these out - happy to see lightish tactiles that are also clean! Loving the force-curve comparisons (and history lesson), as always.

Like Gazzew’s switches, it also looks like these are Milmax friendly; that is they have fairly large recessions around the pins that allow the switch to sit flush on the PCB even if it has the thicker-rimmed sockets that otherwise usually cause switches to sit a little high:

This is one of those little things I love to see, alongside stuff like the subtle re-shaping of the top housing (done by Gateron, Aflion, and in some cases Kailh to improve compatibility with keycaps regardless of their mounting direction). A tiny feature, not likely to ever be mentioned in a product description or bulleted list on a store page - but for some folks and some builds, a tiny feature that makes all the difference. Makes perfect sense to have a feature like this on switches with a “boutique” marketing aesthetic.

You’re right to be interested in them. They’re taking feedback from modders, it seems.

MODE Tomorrow is truly a current-generation or next-gen switch, not something from the past. It has very low wobble, about on par with the AKKO Cream Blue tactile (i.e. their latest).

Cream Blue still moves more if you try to rotate the stem in the housing in a circular motion. So Tomorrows are very tight. Leaf noise is slightly greater on the Cream Blue during slow keypresses, although they are both relatively good in that regard for a tactile. MODE Tomorrow is lower-pitched than Cream Blue, and almost doesn’t ping.

The tactility of MODE Tomorrow is a little less than Cream Blue, feeling rounder, less blocky, and less abrupt than the AKKO switch. (Less “punchy.”) And honestly, this is the weakest aspect of the switch for me.

Not that the switch is too weak, but that the stem shape is too boring. It feels like a thicker-stemmed lubed Penguin, which is also a kind of dull stem/leaf combo. Like an oval or ‘shallow D-shaped bump’ as mentioned earlier.

So I’d like to see a more Cherry-shaped stem, and lighter spring. But that’s just me. The overall build characteristics of the switch are excellent so far, and I think other premium switch lines should take inspiration from it.

It beats out JWICK T1 in terms of wobble-reduction. It’s more on par with Baby Kangaroo there. It beats Blueberry Chiffon, and many other tactiles, in reducing leaf noise. The springs seem quieter and more consistent than other switches. [Unless you press slow]. It’s just the uninspired bump shape that needs to change - TTC Pale Blue did it better. (Pale Blue can’t touch it in reducing shuffle).

It’s basically on par with or exceeding the latest stuff [AKKO POM Brown and Cream Blue, Gateron Baby Kangaroo], except they often have more interesting stems. It’s in a tight competition with Aflion’s latest.