Need a bit of help, soldering

Hello everyone, I’m new here but I am at my limit. With some help from a nice fellow on reddit, I was able to diagnose and even fix some of my keyboard issues. I have a leopold FC750R TKL

First my left ctrl, alt, windows key, and z key went bad. I ordered some switches and a soldering iron to fix it. Replacing the switches fixed the z key and the ctrl. Someone on reddit told me it how to test the switches with wires, and we determined I had a bad diode. I ordered some new diodes and replaced the one that had gone bad. Now my ctrl and windows key were good, but then the alt and the forward slash question mark key on the other side of the keyboard, not connected directly by any circuit, went bad. I replaced another couple diodes and my whole left side is fixed, but the QM\FS key is still not working. replacing the switch did not work, and when I use a wire to test it with all the surrounding diodes it works. when I touch a wire between its own two pads, nothing. When I touch the left pad to any diode and press, it registers. When I touch the right pad to any diode it registers. I’ve already sunk 50 dollars into the cost of trying to repair it, i’m just at my wits end.

Did you make sure the diodes you installed were in the right orientation? Diodes are directional and will not conduct right if installed backwards.

Can you show photos of your PCB?

Agree a photo or two would help.

I was able to fix a couple dead keys by using a jumper - just a piece of wire soldered-in to connect a dead switch to the next pad down the line. I used tweezers to test-around until I found the right connection.

Ha, my first solder project looks way worse - but it’s also not the worst reference when it comes to a possible solution here; 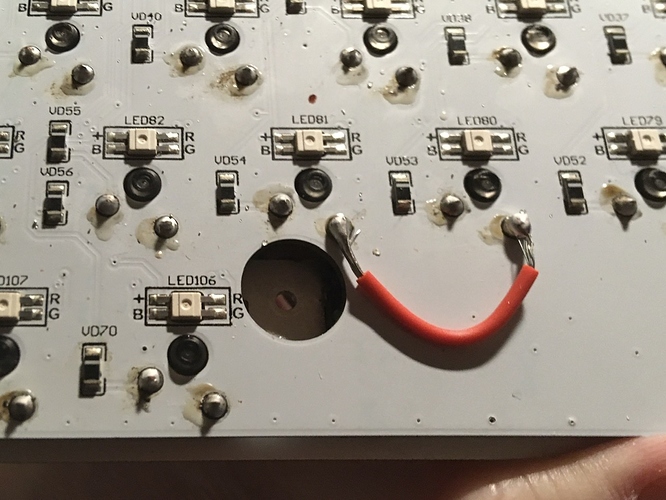 Being too hasty with removing the old switches, I’d pulled a pad from the PCB. I used some wire to find the right trace, and just soldered a piece to bridge the pins for those switches - it looks rough, but it functions normally.

I’m still pretty n00by in this realm, but those darker contacts on your board look oxidized. You might need to (gently) clean them with some white vinegar or baking soda if you end up needing to bridge those contacts.

Thanks for the tip, I’ll see if that will work for me.