[NK65 EE] How to fix a screw post that lost its thread?

I finally got my NK65 EE and as many others have reported, they don’t use metal thread inserts in their screw post, and these predictably crack or lose their thread (they also use self-tapping screws).

My keyboard suffers from the same problem. While this is not super annoying as long as I don’t move the keyboard around, it does bother me as it makes the keyboard wobble after I lift it up. I also don’t have great expectations for long term longevity if I need to open and close it again.

Has anyone had experience fixing screw post that lost their thread on polycarbonate cases? I’ve read a number of recommendations, like epoxy filling, superglue, and others, but they seem to be something rather permanent, while I would like to still open my keyboard in the future.

P.S. the NK65 EE is still a nice keyboard feeling-wise, but quality is really a mixed bag.

I’ve taken heart and opened up the case and found that two of the 6 posts are completely broken, while one is badly cracked. See pictures. Given how bad the situation is I will be looking for a replacement part. 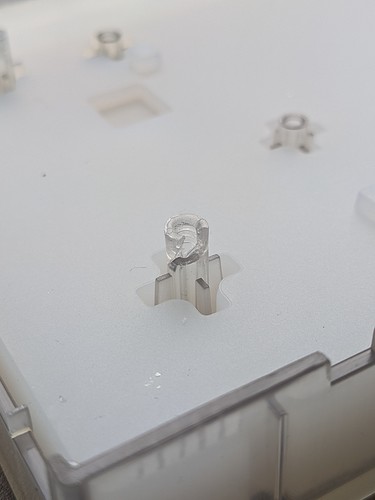 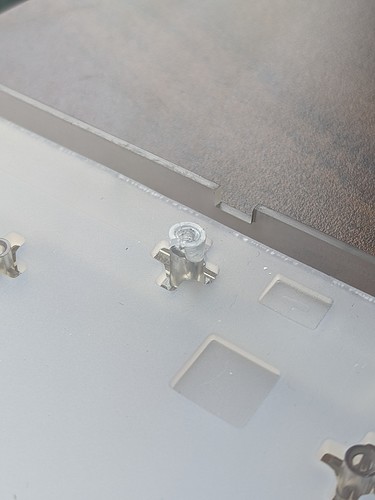 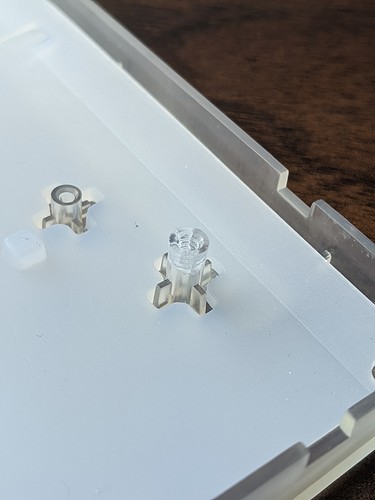 given that this is the clear variant, I’m assuming this is relatively new? if so, I’d reach out to NK because this doesn’t seem like it would fit under their acceptable standards (given that they marked the previous batch of purple NK65s as B-stock due to occasional chances of cracked posts).

Yes, this is their latest batch. Interestingly it has a 6th post that screws just right of the spacebar, which doesn’t even show in their build instruction video.

Originally, I thought it was just a loose screw and knew it would be outside their acceptable standards, but with two broken posts and one cracked this has an issue.

I wonder if the cost savings of skipping metal thread inserts have been worth it with all the issues people are reporting.

I personally won’t be buying another one until a “v2,” but I do still think it’s a good product for the entry entry level, as in someone who will be putting switches in it and using for the rest of time, not for the next step up, the “tinkerer.”

Try epoxy clay with the screw in it until it cures. May need a touch of silicone/release agent on the screw but should work.

How did you fix the issue? I have the same issue but mine was from the batch where the cracks started but now the same issue that you have has surfaced.

They offered $30 back or returning the keyboard for full refund. Since they don’t have stock, they can’t offer replacement parts.

I am probably going to ask if I can hold on returning it until I get my Portico, or I am without a daily driver.

Such a shame, I actually quite enjoyed it, will still try to get it at the next restock.

I doubt they’ll ever accept to send just the bottom plate anyway. Such is life with a small producer. If they offered to replace the bottom plate I would have tinkered, but not worth otherwise.

This was mine when I still had it (half of the post had split clean off). If you haven’t thrown away the piece that fell off, you can wind some thin Scotch tape around the post to line up the threads.

It’s a pretty janky “solution,” but it should be a bit more stable than not having half of the post altogether. 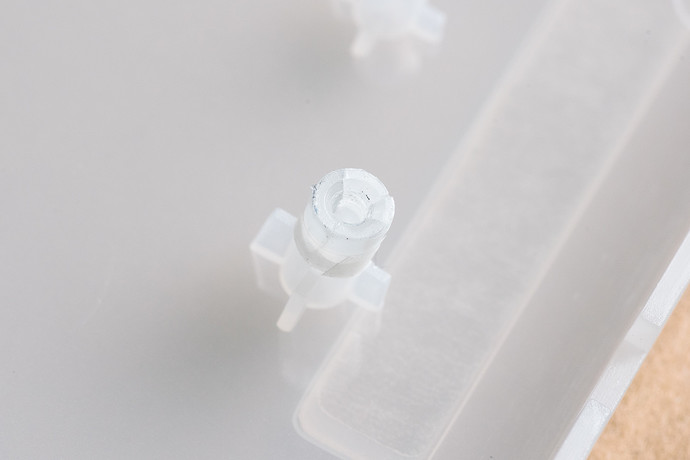