So all customs now? That’s kind of a bummer.

I guess I’ll look forward to seeing what you’re going to do in the future.

As of today, it’s all a limited edition.

With the Heavy Grails shipping soon, I feel like I’ve now tackled all the interesting problems in the world of Topre, so it’s time to drop the mic and move on before things become tedious. As of the end of this year, I will no longer be producing Topre housings.

Thus what I currently have for sale is pretty much all that there is or ever shall be. 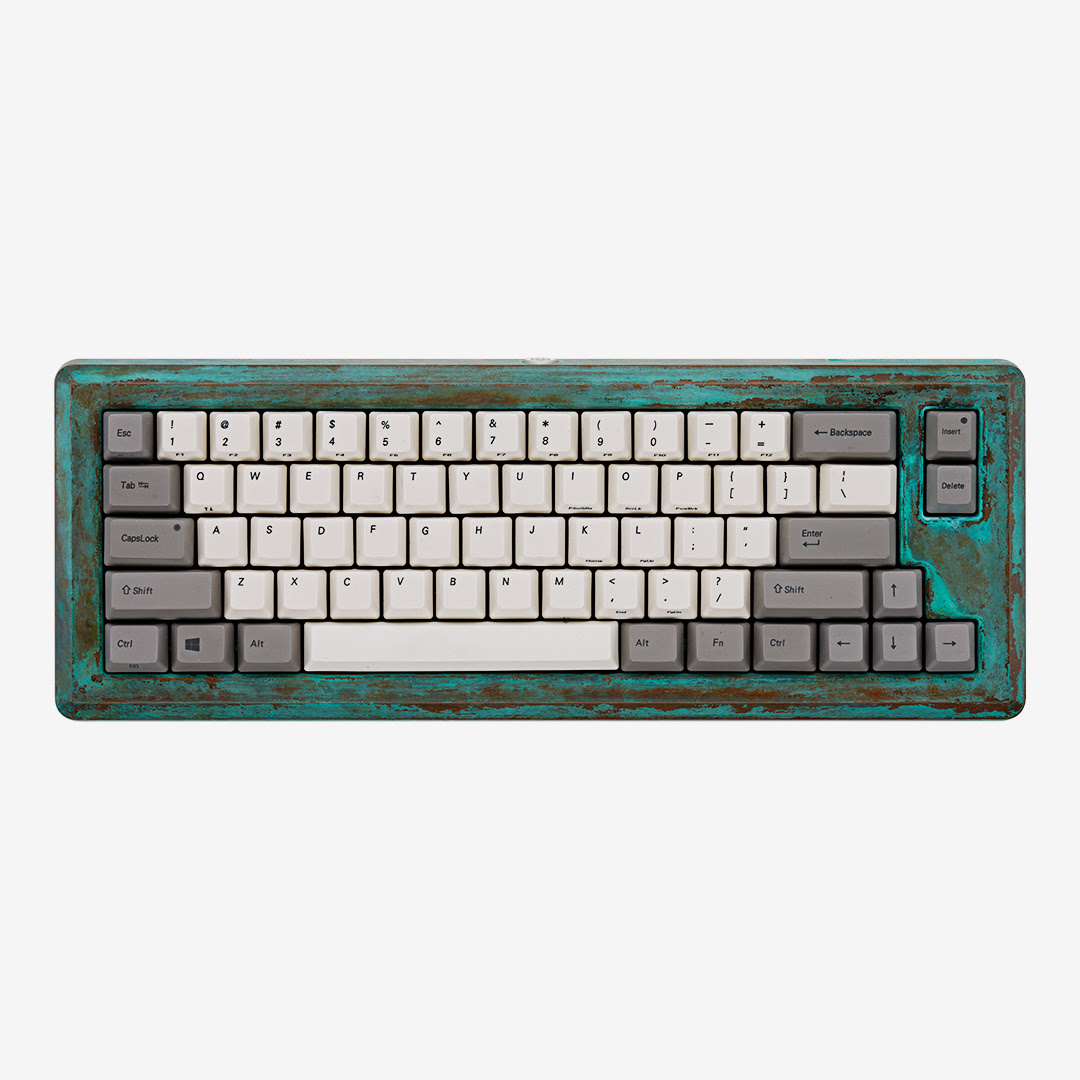 While the getting is good…

I wanted to share this news with you, loyal subscribers to my newsletter, before posting about it elsewhere online, because I’ve noticed in recent months that there seems to be a pretty vigorous (to put it diplomatically) secondary market for stuff that I make. And I’d obviously rather sell my remaining inventory to the actual end users of my products than from someone just flipping a board and adding no value.

Here is what we have left (including available spots among items still being manufactured and slated for completion before the end of the year):

I do have in mind one or two potential additional limited holiday offerings before the end of the year, but I’m still waiting to confirm prototypes on those.

The keyboard adventure is just beginning.

This doesn’t mean that I’m done with keyboards. For one thing, our increasing volume of bespoke work will continue, including custom Topre aftermarkets. I also have some other technically ambitious projects that I’ll be able to elucidate in 2022, and I’ve been exploring a podcast idea that I’m really excited about, digging a bit deeper into the culture and psychology of luxury keyboards.

Stay tuned for some very different creations in 2022, and few quirky one-off projects in the meantime. Thanks, as always, for sticking with me and being interested in my explorations and experiments.

Damn, need to make my last FOMO purchase before the flippers get them…

@norbauer I just made it on the Instagram… Thank you for all your hard work and amazing cases. I look forward to what you do next!

Nothing lasts forever, but I’m happy Ryan is moving on to projects he will hopefully find more fruitful! I’m personally excited about eventually getting my Heavy Grail and I’m definitely excited to see what this “increase volume of bespoke work” will include and what that will mean. In addition to wonderful keyboards chasis in the past, we’ve seen some cool carry cases, patches, keysets, and keyrings!

Cheers for what the future holds for us all

But I can’t handle change!

A sad day. From my first ever keyboard meetup, Ryan’s keyboard designs were a show-stopper. I’m fortunate to have been in the hobby at the same time as everything he’s put out into the world.

I’m sure I’ll be fortunate, too, to see what his clever/dedicated self comes up with next. But still sad.

Today I decided to bite the bullet and make my norbaforce order. Looks like it was perfect timing.
It would be a lie if I said that I’m not sad or a little emotional about this announcement. But let’s look at the future with optimism.

It would be a lie if I said that I’m not sad or a little emotional about this announcement. But let’s look at the future with optimism.

A sad day. From my first ever keyboard meetup, Ryan’s keyboard designs were a show-stopper. I’m fortunate to have been in the hobby at the same time as everything he’s put out into the world.

Many thanks for the kind words!

For whatever it’s worth, I’m definitely not exiting keyboards. If anything, this decision actually indicates a deeper plunge in a sense.

For over three years I’ve been working on a sort of Manhattan Project that aims to solve at once several longstanding technical problems in the world of enthusiast and high-end-custom keyboards. My arriving at the decision to drop the mic on Topre is as much an indication of excitement about those new projects as it is about lack of interest in Topre itself. I’m still obsessively experimenting, tuning, and refining prototypes of these new mechanisms, but hopefully in 2022 I’ll be able to share more details. I’m not being secretive for the sake of it, incidentally–just following the same philosophy I did with the Heavy Grail: of not sharing product details until I feel that all the challenges are fully figured out, mostly to avoid embarrassing myself if I don’t end up being able to solve all the technical problems.

This is an inconsequential part of my future plans, fwiw. I just find challenging one-offs to be sufficiently creatively interesting to be willing to do them occasionally. And for some reason I’ve been getting a ton of requests for those types of projects lately, such as the bespoke copper verdigris housing I send in that email above. So I didn’t want to rule more of this kind of thing out in future, even if for Topre aftermarkets.

I did think about just keeping a small stock of Topre aftermarket housings around into the future, but ultimately decided against it for several reasons. Perhaps the main one, however, is just the sense of having accomplished what I set out to do–to have solved the Topre problem, as it were (at least to my own satisfaction). I also kind of like the idea of putting a definite end on things, in the sense that perhaps one day my “vintage” Topre housings may become collectible like old Korean customs from the early days–as a artifacts of a particular era in the keyboard world. This is a conceit, I’ll acknowledge, but a healthy one.

I guess I gotta get a heavy nine

The Heavy-6: Urbi et Orbi is probably my favorite of the topre selections (and thus keyboards in general), something about it strikes just the right note. (Hey, there’s some still available!) Followed by the classic simplicity of all those lovely norbatouches. It’s been a struggle to track down novatouches but still worth it every time (up to 5 now).
Thank you for all your wonderful keyboard art Ryan!

I’ve got one coming myself. I’m extremely excited for it’s arrival.

Heavy 6 has been my favorite case so far. Probably why I have 3

Would buy another PC one if we could make the MX pcb happen. Maybe some day…

Well I finally have an excuse to get a heavy-9

I’m sad norb won’t be doing topre housings anymore, but look forward to see what he’ll do in the customs space in the future. While I hope it’ll be related to EC keyboards, even if it’s not it’s sure to be interesting given he occupies a unique space, somewhat isolated from the rest of the keyboard community.

What’s the difference between the mark i and ii norbaforces? Feeling the FOMO but not sure which one to choose

What’s the difference between the mark i and ii norbaforces? Feeling the FOMO but not sure which one to choose

Other than that, as far as I know, they are pretty similar. Most of this in formation can be found in products description on the online shop.

now, they are pretty similar. Most of this in formation can be found in

Thanks, this confirms what I understood from the descriptions. I read from the GB thread that it was a ground up internal redesign so I thought there might have been other significant differences that weren’t mentioned.

Thank you, Ryan, for taking the time and speaking to the community so openly.
I’m looking forward to what is to come and wish you the best in solving all the challenges that may arise.

Thanks for taking my favorite keyboards and making them even more exceptional, they are all objects I plan on using for the rest of my life. I’m eagerly excited for your future projects, whatever they may be! I’m still dreaming about a 23u housing to match my Norbaforce heh.

A handful of 23u housings is one of the last two small runs I’ve been scrambling to offer around Thanksgiving before winding things down by the end of the year. I’m trying my best to make it possible!

My g, when I saw the email I was like O no no 23u housing