Smooth Linear by JWK – designed and customize by Wuque Studio 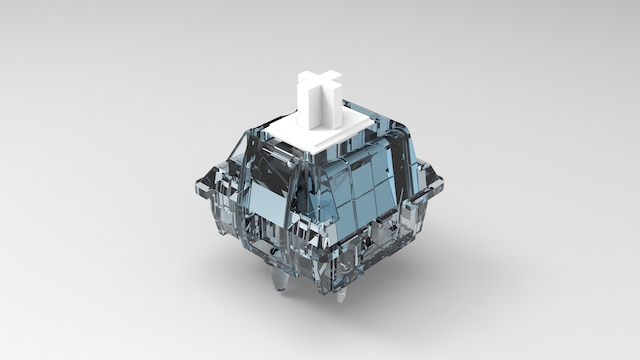 That looks great and some pretty luring specs.
Want to use them on a Cristal acrylic case.

It’s suprising that JWK linears are still being bought when all the recolors are pretty much the same switch over and over again… I will admit though, this looks pretty good compared to the others I have seen.

But what’s surprising about ppl wanting to buy a good switch? All the colors is just the cherry on top.

All the new ppl like me don’t know about that probably have something to do with it.

For those who may be unaware, they recently received samples of what appear to be the final switches. The blue housing parts are quite saturated in comparison to the initial renders. Here’s one picture: 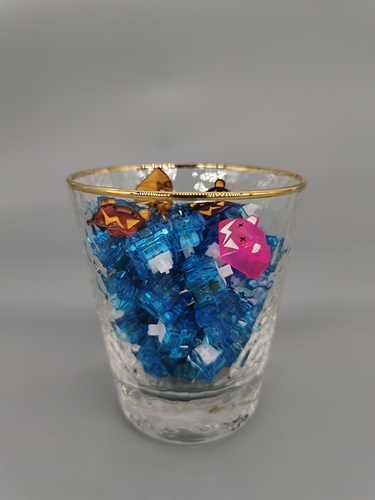 They look nice to me, but I’m unsure if I prefer them over the the dimmer renders.

Ugh, a tad less cool I guess. I’m still super intrigued by all the PC/UHMWPE goodness and the Tangerine-ish sound and feel these might have.

I really like the render color of the switch. To bad they changed it.

I know right. Why did the color change? Are the bottom housings really UHMWPE? Are these made from new molds or just another recolor?

… I love this hobby so much

I grabbed a 110 pack of these from CannonKeys on the hope they are using fresh moulds. I double checked the GH post & there is no mention of if these are using a fresh mould or the V2 Tangie moulds. Either they should turn out good as there hasn’t been many runs of the Tangies so the moulds shouldn’t be worn to the point it affects the performance of the switch yet.

Although this does highlight something I’ve been noticing lately that nobody really talks about, how switches made closer to the beginning of a mould’s run are noticeably better than ones made late in the mould’s run. Retooled blacks are the what really tuned me into this. I was lucky enough to get two batches of retooled blacks that were made in the early runs of the fresh moulds. Those things are easily the smoothest Cherry switches I own, even over a batch of NOS vint blacks IMHO. Although I got a few MX blacks made more recently & they are noticeably worse than early retooled blacks I got. Much more scratchy, looser tops, slightly more stem wobble, just all around worse IMO. So IME, where in a mould’s lifespan the switches were is a very important consideration when buying switches. Well at least for people like us who are looking for the peak performance out of them & notices small differences in feel & sound.

i dont see the OA switches on CannonKeys strangely enough…

Edit: here’s the direct link for it - https://cannonkeys.com/products/gb-wuque-studio-original-aspiration-oa-switch

Dude. Well said. TIL to the nth degree.

This is totally true, and also explains some things I was curious about a few years earlier in my keeb journey. Namely - how Turtle Beach could sell a TKL full of Cherry blues for fifty bucks, and how those blues could feel so different than the ones on a Filco TKL, even taking into account differences between the boards themselves.

I’d be curious to see the mileage on a given Cherry mould vs some others.

Are the bottom housings really UHMWPE?

I think so. I listened to Andy Nguyen’s sound test, and it reminds me of Tangies.

Those housing colors are making me think beach theme…