I decided to make a sound test video of Outemu Sky/Silent Sky switches so you guys can hear the difference between the normal and silenced versions. (v2.2 in case you’re wondering!)

Thanks, this is so helpful.

I’m starting to experiment with Skies, but I’m not sure what’s going to end up in the build.

It’s very interesting to see these being used on Polycarb cases. I have a polycarb KBD8x mkii coming up. I wasn’t sure how the combination would be.

From a sound perspective, I favour Silent Sky. Are you using them on a metal plate? KBD8x comes with brass, but I can get polycarb and FR4 plates aftermarket.

I should also say, my main concern is with spring noise and ping. I don’t care if the ‘silenced’ switches make some noise, but I don’t want there to be spring crunch as with Aliaz.

I’m replacing Silent Sky springs with lubed 62-68G from TX and Spirit, so I think those will be less noisy. Did you lube your switches/springs, because that’s considered mandatory with Skies among enthusiasts.

I favor the Silent Sky as well. The GK64s plates are FR4.
I don’t really hear much if any ping with the silents, but there is some with the regulars.
However, neither version has the spring crunch of Aliaz switches.

Speaking of which, I actually never knew about the spring crunch of Aliaz switches until you mentioned it just now, so I just tested it out. Being a vendor, I have a lot of switches to test it with, and from I can tell, it seems like not all of them have the crunch- maybe around 25%-30%. I need to investigate a little bit more before I can make any definite conclusions about the cause, but I suspect that it may be due to a particular orientation of the spring when installed into the housing. If that’s the case, it might be as simple as opening up the housing and rotating the spring until it is in and orientation that does not cause the crunch.

I did not lube the Skys, but I will definitely have to try that out sometime to see how it feels like.

Haha, you’re the second person to tell me that they became aware of the spring crunch because I brought it up. [There was a guy happily typing away on them on elsewhere, until I mentioned the spring crunch.]

I think you’re right, it may have to do with the alignment of the springs. For me, the solution is to replace the spring, since I don’t think it’s so great to begin with.

Aliaz is a very quiet switch with a big Achilles heel in the form of the spring. Some of them crunch, like we’ve established, and I’ve had ping from them as well. Someone else is replacing their springs right now because of ping. They noted that the 60G seemed to ping more than the 70G, and are investigating that now.

In any case, OUTEMU Silent Sky can be at least as quiet as Aliaz, probably moreso. The Silent Skies take to lube much better than Aliaz, which remains mostly unaffected. What you’re pretty much expected to do is both lube and spring-swap them. I prefer the 62G, so I will be replacing them with the equivalent Spirit spring and also 63.5.

Thanks for the tip about the GK64 plate. The GK64 feels good, even if it has an odd layout, so maybe it’s FR4 that would make sense for a KBD8x Silent Sky build.

my main concern is with spring noise and ping

I’ve found that bag-lubing the springs with a reasonably tenacious oil does wonders for ping.

I put together some “Unholy Silent Skies” - or Outemu Silent Sky v2.2 tactile stems in Halo housings, and with Halo springs (the real reason why the CTRL is notorious for singing the song of its people).

I put these switches in a board for a cyclist, so I lubed the springs with Tri-Flow. Even with a cheap steel plate, no ping whatsoever - but it does smell a bit of bike oil so you might want to use something else. ; )

How are these Unholy Silent Skies? [BTW are they really “Unholy” if they are not a reverse HP?]

Bag-lubing should work, I’m glad it worked for you. Gazzew recommends “donut lubing” if you are using the original OUTEMU springs.

If I’m using Skies of any type in a build, the springs are going to be lubed without question.

They really impressed me. I’d used them before with lighter 52g catweewee springs, and I kind of hated them - but with the 65g Halo Clear springs (and some lube) they felt great. Moderate tactility, snappy operation, very quiet, and overall quite satisfying to use.

I call them “unholy” with the idea that the “unholy” in Unholy Panda derives from the donor switch’s name, Halo - like you might find above (or conspicuously absent from) an angel’s head. Unholy Pandas are Halo housings with Panda stems, and Holy Pandas are Panda housings with Halo stems - I tend to use “unholy” for any frankenswitch that utilizes a Halo housing, and “holy” for most switches that contain a Halo stem.

It looks as if there may be an issue specifically with the 60g Aliaz switches.

There is a post about ping with the 60g version that only occurs in those switches. The 60g Aliaz ping with the stock springs, as well as other springs. The 70g don’t, in this case.

Now, in the above case, what the user should be doing is lubing the springs. But it is interesting that there seems to be way more ping with the 60G. Maybe it’s just a fluke.

As usual, spring swapping and lubing is probably the solution.

I can confirm that spring crunch affects every spring version of Aliaz, even the 100g ones. Ordered different batches through Flashquark, KBDFans, and NovelKeys.

I also noticed it on my batch Outemu Silent Sky switches ordered through AliExpress.

Seems to me it’s not too common, only affecting maybe 1 out of ~30 or so switches, and re-seating the spring typically fixes it.

As for ping, it seems these Outemu Silent Sky switches definitley have some, but I don’t mind it. To me ping is like the turbo of your sports car - it’s a good sound that means it’s going hard.

Thanks, I’ll relay these findings back.

Ultimately, it looks like spring swapping + lubing is the solution for Aliaz, and probably Silent Sky as well.

I don’t want my Silent Sky to ping if they go into a build, but part of that is the case. There are things that can be done with the case, such as foaming and lubing certain spots, that can reduce ping.

Honestly, I’d rather have a loud switch that doesn’t ping than a quiet switch that pings. And tactiles seem more guilty of this, requiring more work.

Yeah you are probably right, I suppose that bump in the tacticle switches transmits lateral forces into the spring.

One really effective thing I found for reducing ping is a soft plate material like acetal (AKA Delrin). While acetal copolymer is softer than acetal homopolymer, at 1/16", it’s really a negligible difference. Metal will resonate at a higher pitch and seems to harmonize somehow with ping noise.

So I just realized that Outemu Silent Sky switches are donut-dipped from the factory such that the bottom of the spring that touches the housing is lubed. In addition, the stem legs/metal leaf are lubed as well. I’m not sure how I overlooked this given that Outemu mentioned that it might take awhile to have these manufactured due to the handmade nature of these switches. I didn’t question it at the time, but now I realize that they are handmade because each switch is individually lubed then assembled by hand.

@equalunique were your switches that you got from Aliexpress also lubed in this way? I ask because I don’t hear any spring crunch or pinging from the Silent Skys at all. The lube appears to be a fairly viscous lube that is a grease rather than an oil. I’ll have to ask the manufacturer when I get a chance to see exactly what lube viscosity they use. 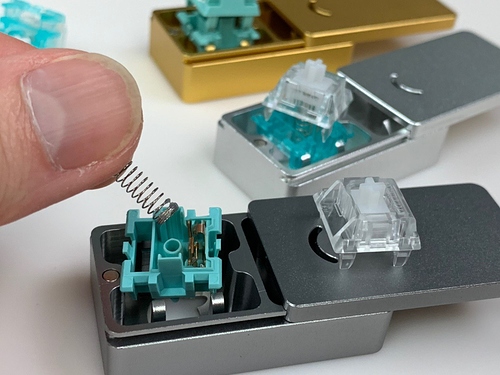 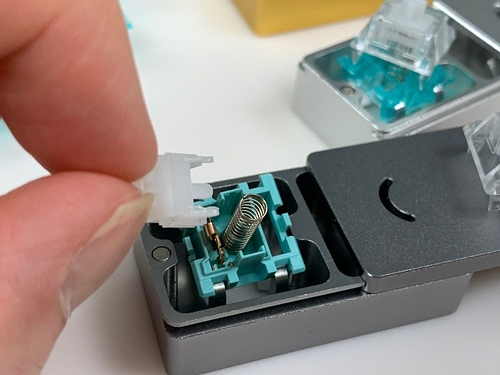 In any case, I decided to take the idea from the Silent Sky switches and check if lubing Aliaz switches in the same way would help with the crunch/pinging. The video below shows the results.
It appears that lubing the spring ends does clear up most of the spring crunch. Past that, there’s a bit of a noise that I still haven’t pinpointed the source of yet, but no matter what, the result is MUCH better than the crunching sound of the spring of the unlubed switch at the beginning of the video.
Also, I realize I took it a bit too far and shouldn’t have dunked the entire spring in the lube but… you can only learn if you try, right?