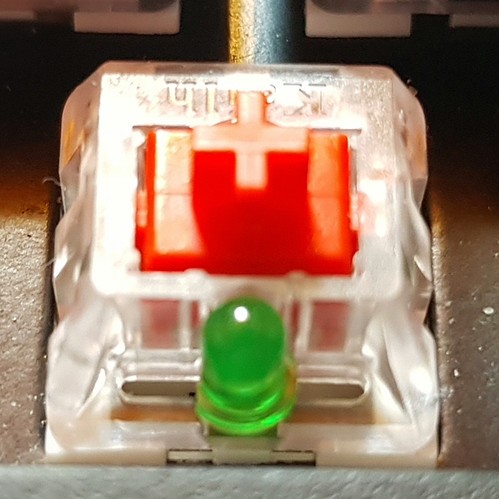 Pictured here is a green LED I bought from the workshop and soldered. It lights up, but suffers from 2 problems:

The keyboard originally came with 3 blue LEDs that don’t exhibit these problems.

These are all good questions.

For the keycap clearance, there are a few options. There do exist lower profile LEDs, as well as specially-sized washers to raise the keycap. Since the top 9/10 or so of that kind of LED is just the plastic lens, you could also shave them down.

The brightness bit is a little more complicated, but there is an answer - or answers.

Different LEDs can be rated for different intended brightness - and an LED’s brightness is also affected by current.

You can use a cheap multimeter to read what the PCB is putting out, and if you have information on the LED you have, compare that to what it’s rated for. If there’s overhead room, you might be able to make it brighter - but it may also be more simple to just buy a brighter LED since they aren’t very expensive.

I happen to have a project that I’ll be approaching soon along these lines; I have a Filco that I love, but the lock light LEDs absurdly bright - so I’ll be using a device my dad made to dial-in the right amount of current to dim them to my preferred brightness. It tells you what resistors you’ll need to accomplish roughly the desired result.

It’s a convenient do-dad, but you don’t necessarily need something like that. I’d start by looking for low-profile 3mm LEDs in your desired color, maybe including the term “ultra bright”. Here’s an example of one:

The 3mm flat top pure green led is one of the most popular wide angle leds available.