I have a Leopold fc660m with Leopold’s stock ~1.5mm thick PBT keycaps. The spacebar produces a weird sound on the upstroke. I’ve ruled out stabilizer rattle, and I’m not concerned with how loud it is. Instead, it produces a “mechanical fart” sound, akin to when two of those fidget magnets stone thingys collide. 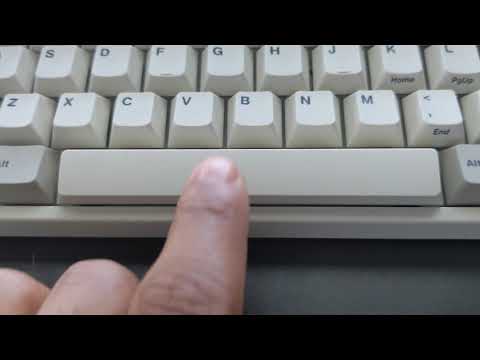 The reason why I’m putting all these weights here is because my theory is that the momentum that comes from having such a heavy spacebar along with the force of the spring causes it to rebound when it tops out. I think having a lighter spacebar would fix this issue, but I like this one, and would just rather not have to order a new one.

If I’m right, are there any modifications I can do to mitigate this? Otherwise, what is the source of this sound?

I could try to re-lube the next time I open it up, but I’m still not convinced that’s the issue, because the sound is only produced after the switch tops out and if it tops out hard enough; if I keep my thumb on the spacebar when I release it, it doesn’t happen. The vertical limit of the the stab slider is higher than the vertical limit of the switch stem (presumably to mitigate rattle). The sound of the spacebar is pretty consistent along the length of it, so I think I lubed it thoroughly.

I just took a slow motion video with my phone, and it definitely looks like the keycap oscillates when it tops out.