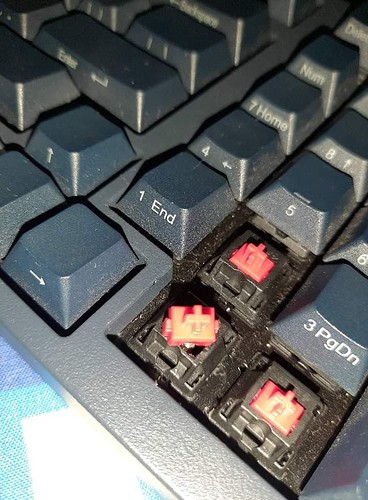 found this in local keebs community , seems like retooled cherry mx red on leopold fc980m keeb
I also have a keeb with mx red switch, fortunately it never happen to me when pulling the keycaps
Is this really a bad design of new retooled stem or just a bad batch? is there any tips to prevent it? im feel pretty worried right now just to pull out the keycaps

Is this really a bad design of new retooled stem or just a bad batch?

It may be a combination of both. Here is a guide to fix it.

In the future, holding the stem in place while pulling up the cap could help, although it would be tricky. Really make sure to pull strait up and do not wiggle the cap.

ah yes dont winggle the cap thats make sense , i always winggle the caps when it super tight and hard to pull
i think holding the stem when pulling the cap will be hard since there isnt any space between the cap and the switch to hold the stem

Yeah but you can kinda shove a toothpick in there, it would be hard though.

just thinking of it , it will pain to do

Crazy how this is the exact opposite I would give. My immediate thought was that this was 100% user error with a tight keycap and being pulled forcefully off.

Wiggling a keycap off slowly has never failed me.

Taking a heat gun to the cap could work, but it might make the problem worse.

Ohhh, it’s been a long time since I’ve seen this issue. I’m pretty sure it’s mainly caused by tight keycaps being pulled off with pure force, possibly at odd angles. It used to happen a lot with cherry blues that had OEM caps that didn’t have good tolerances.

The classic advice to fix this has always been to wiggle when a cap is too tight; that might change if the tolerances of a switch are really loose but in general the wiggling actually makes it harder to accidentally pull out since you don’t need nearly as much upward force to remove a cap that way.