I tried Halo True switches on a soldered keyboard recently, and love them. I bought a second hot-swap keyboard with those switches.

Now that I have the hot-swap capability, I’m starting to wonder what to try next. I’d like to find other switches that have the things I like about the Halos, specifically…

I’ve looked at Durock T1, Gazzew Boba U4, Zealios V2, and Holy Panda X, all of which are lacking in one or more of the above. Is the Halo True the only prebuilt switch that’s going to tick all of these boxes?

I’m about to try my first Frankenswitch – I picked up some Holy Panda X on the recent sale, and I’m going to try swapping the springs out of Halo Trues into those and see what that feels like. Any other suggestions for things I might try to uplevel my typing experience?

Maybe I’m not on the right track here, but what about TTC Pale Blue?

It’s a medium+ strength tactile, I’m pretty sure the tactility begins right away. It’s very crisp, though, not exactly fluid. Springs are only medium-strength, though.

I think Durock Medium Tactile fits a lot of those categories, although you might want to put in a heavier spring. 65 G is pretty robust on the Taro Ball, but it could be heavier.

That stem in a T1 housing [switch known as Twilight] could work, but T1 and all Durock tactile needs lube.

I think the Halo spring is kind of progressive, so most stock tactiles aren’t going to be like that. You could play around with Holy Bobas. Halo stem, in a Boba housing. Use a heavy progressive spring, like 78 G or higher. Maybe even an MX Clear spring? I wonder if U4T with a heavy spring would do.

I second what @HungerMechanic says. I think you need to try those switches again with some heavier progressive springs. Having tried halo true and clear side by side, it’s amazing how much difference a spring makes.

Thx. What makes Halo True unique is the heavy, (progressive?) spring. The top-mounted, decent-sized bump can be found in many switches these days. The True’s stem specifically has been copied a lot. So it’s the spring that has to be accounted for, when trying to replicate the True.

Durock Medium Tactile reminds me of Halo True more than T1 does - T1 has more pre-travel, I think - it’s more Cherry-like and conventional. So I’d make a heavy-springed / progressive DMT.

I always felt that the AKKO CS Ocean Blue was like a lighter [in shape and spring] Holy Panda. The Lavender Purple is the same thing, I think. Ocean Blue has a light/medium progressive spring, and Purple has a heavier linear spring. So it may be worth putting heavier and more progressive springs in those, for a Halo True alternate. [And they are so cheap].

[I heard you can get those stems to work in Boba housings, so that could be a real tactile Halo True alternative with the right spring].

Lastly, it’s worth mentioning that Kailh Pro Purple seems to be a lighter Halo True. I like respringing them to 63.5 G Spirit for a light but sturdy top-mounted tactile. It doesn’t seem to do well with light progressive springs, but could be interesting with heavier (72 G and up). They might overshadow the entire, mild tactile bump though.

I picked up some Holy Panda X on the recent sale, and I’m going to try swapping the springs out of Halo Trues into those and see what that feels like.

Honestly I think this is a great idea given your stated goal here - there are not many springs that behave like the Halo True’s - though it’s not completely alone.

From my understanding, the HT spring is actually what we’d call a “fast curve” - while I don’t think it’s technically progressive (its rate of increasing resistance is constant), it does have a very different feeling at the top, middle, and bottom. The opposite of a slow-curve spring. Starts light, actuates normal, bottoms-out really heavy.

For clarity, you’re probably more likely to find a fast-curve spring that is also progressive than a linear fast-curve spring, at least when it comes to aftermarket stuff. In fact, most springs with fast curves available right now are also progressive, and primarily sold as “progressive” in the name, with mentions of the fast-curve relegated to the description. Progressive fast-curve springs are going to be pretty darn similar to linear ones, because that big difference between the top and bottom will be about the same if not more; just the increasing weight will pile-up later in the travel rather than steadily throughout.

Because this spring type is so vanishingly rare compared to the rest, I actually keep a whole bunch of Halo True springs around for when I want that kind of feel. During the Holy Panda craze (before you could just buy them), people were discarding leftover Halo parts left and right, and I happily soaked-up any available extras.

As for stock switches, the closest thing I can think of to a Halo True is a Hako True (same designer, long story), and they’re only similar in-theory. The same things were kept in-mind while designing them, but the end product is pretty different - and being a BOX design there’s a bit less franken-potential.

I do think frankenswitches are going to be the most fruitful route here in terms of ticking all those boxes, and there’s already plenty of good suggestions here.

I’ve got the Akko CS Ocean Blues as well as the Lavender Purples; I’d say the lavs have a bigger and more prominent bump and less refinement in the sound (needs more effort to tune for clean sound). Totally ignoring sound, though, I might prefer the purples for feel. I’m with @HungerMechanic that they’re at least worth considering as either stem or spring donors. The Ocean Blues as well, they have a bump that starts right up-top, so some fast-curve (or fast-curve progressive) springs in there might accomplish your goal.

If you can find them, another switch that might be a good candidate to swap a fast spring into is the TTC Matrix-01 Tactile. (An easier-to-find alternative would be the Bluish White which uses the same stem - but to get full-travel from it you’ll have to remove a small silicone plug from the center tube.)

There’s also the Ink Kangaroo, though it does have a shorter travel. Bump is right at the top, though, almost “T” shaped as opposed to “P”.

All three of those switches have a pretty similar character and check at least a few of those boxes; I think a fast spring in any one of them has a good chance of satisfying: 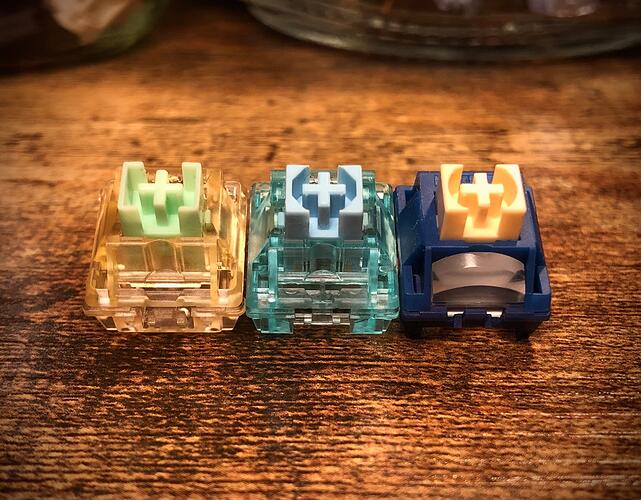 When you’re saying “clean top bump” is that related to the ‘pre-travel’ mentioned by OP? Typing on some Zilents 67g, and I’m noticing a hint of movement before the tactile ‘bump’ (like 0.5mm) - is that avoided by these other switches mentioned here?

Yes - when I say “top bump” I mean no or close to no pre-travel before the bump. When I say “clean” I just mean the switches aren’t rattly, pingy, or especially scratchy.

Those three switches in the photo all have basically zero pre-travel. It’s most noticeable with the Kangaroo (left one); the stem doesn’t move until you push through a short, sharp bump at the top, no pre-travel at all. The CS Jelly Blue (middle one) is very similar, but isn’t short-travel like the Kangaroo is. The Matrix-01 also has basically zero pre-travel, but its bump is a lot less sharp / more round than the other two - a little closer to a Zilent / Zealio bump.

Zilents themsevles do indeed have some pre-travel; whether this is down to the bump design or the fact that all Gateron-made silent stems sit higher than their non-silent stems, I’m not sure.

Thanks for all the great responses everyone. Taking notes!

Just wanted to give an update here.

I got my packs of Holy Panda X today and tried swapping the springs… verdict: I like the OG Halo Trues better than either frankenswitch. There’s a definite tradeoff between tactility and spring weight and the feel of bottoming out bugs me more than the loss of tactility.

Inspecting the Halo True spring, it does not appear to be progressive. There is no difference in how the spring is wound over the length of it. It is shorter/more compressed at rest than the Holy Panda X spring, but that worked out fine with this swap since I moved it into the housing with the shorter travel.

So, now I’m going to look for a switch with a stronger tactile bump than the Halo/HPX that has a full 4mm travel like a Cherry MX Clear. Unfortunately, all of the switches we’ve been discussing seem to have a ~3.5mm total travel Any suggestions? I’m almost tempted to get some Cherry Clears and do some swapping around of stems and springs and see if I can come up with something brilliant. I might also try picking up some 78g Zealios and try the springs out of those in the Halo housing, to see if there’s a better balance between tactility and weight then the 100g.

If you want to mess with Clear stems, that’s totally doable.

One thing that does work is Clear stem in Boba tactile housing. That should give you a very tactile MX Clear [what people used to try with the MX Blue housings]. Traditional-styled bump [maybe higher than MX Clear], should be full 4.0mm of travel.

You’ll want to use heavier than usual springs for this, I wouldn’t go below 62 G L.

The Naevy is supposed to resemble MX Clear, it sure does in feel. If you’re looking for something more modern than MX Clear, these might do.

Can’t remember if you said; have you tried T1s?

They come in a bunch of flavors but they’re all tactiles made by JWK around (more or less) the same stem. Most versions have 4mm travel and a strong bump that starts at the top; like this JWICK one I got a sample of today: 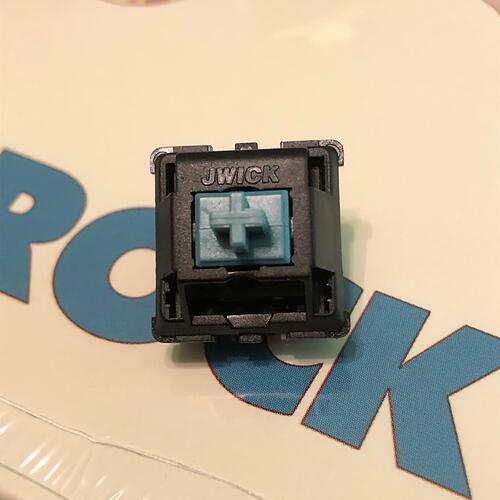 SwitchOddities sells these one at a time, and tons of vendors sell some flavor of T1 in packs.